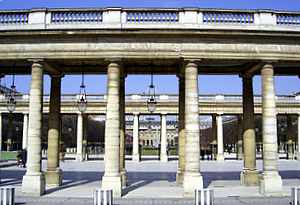 This walk in Paris will take you from the Palais Royal to Hotel de Ville. It starts at the metro station Palais Royal-Musée du Louvre on lines #1 and #7.

When you exit the station you will be at the Place du Palais Royal. Across the Rue de Rivoli is the Musée du Louvre.

The Place du Palais Royal is often a gathering point for roller-bladers who zip through temporary obstacle courses they have set up. They are great fun to watch.

The Palais Royal, the Royal Palace, was initially built as the residence of Cardinal Richelieu, in 1629. When he died, it became a royal residence. It now houses the State Council, the Constitutional Council and the Ministry of Culture.

Cross the Place du Palais Royal by heading north, away from the Rue de Rivoli. The elegant building on the north side of the Place, with its imposing gate, is the Conseil d'Etat, the State Counsel.

Walk to the left of it (west) and then turn right (north) at the small plaza, Place Colette. The building on your left is the oldest theatre in Paris, the Comèdie Française. 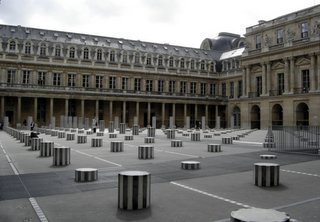 Continuing north, you will pass under the archway that leads to the courtyard of the Palais Royal, the Cour d'Honneur, the Court of Honor. This courtyard was modernized with stripped black and white posts, short and tall, in the mid 1980s, though the State had tried to rescind the contract with the designer, David Buren, during its construction.

At night, the Court of Honor is lit up with blue lights that come from underground and it is used as one of the main venues for the Fête de la Musique, which takes place on the Summer Solstice. 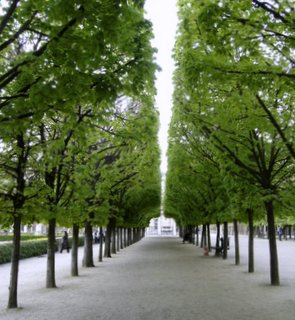 Just past the courtyard is the Jardin du Palais Royal, the Garden of the Royal Palace. The landscaping here is typically French, with two rows of sharply trimmed trees bordering both sides of the garden, with many benches in their shade.

Often there will be sculptures on temporary exhibit here. In the garden, the flowers are planted by the mass, packed together and beautiful. In the very middle of the garden is a fountain and a favorite resting place for sitting in the sun.

At the north end of the garden you will find steps that lead up to a small, covered shopping arcade, the Passage du Perron.

Once through this arcade, you will be on Rue des Petits Champs. If you happen to be there in the evening, when the Passage du Perron is closed, simply stay to the right of the garden and you can exit there. 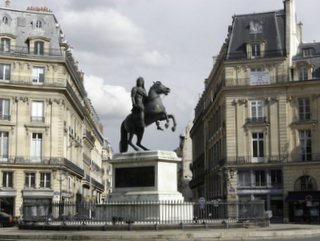 Once on Rue des Petits Champs, turn right (east). From here you can see the statue of Louis XIV, on horseback, that has been the centerpiece of Place des Victoires since 1686.

Directly across this small Place is Rue Vide Gousset. Turn right here and you will quickly come out at the Place des Victoires, which was created in 1686.

The Maréchal de la Feuillade wished to pay hommage to his king by having this statue created by Desjardins placed in the center of this Place built by Jules Hardouin-Mansart.

Heading directly east through the Place des Victoires will bring you to Rue du Louvre.

Turn right here (south). On the left side of this street is the Rue du Louvre Post Office. Here, the lobby and automatic postal machines are open 24 hours, every day.

Turn left (east) on the very next street, Rue Coquillière, and you will be entering the pedestrian area and Garden of Les Halles.

This park is the beginning of one of the largest pedestrian areas in central Paris. It is also a gathering place for pétanque, or boules, players, a game that combines shuffle-board and bowling. It's one of the national games of France. 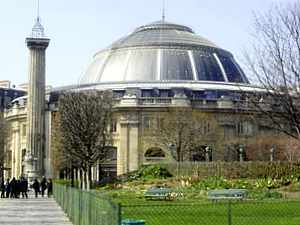 Very quickly, on your right side (south), you will see the perfectly round building of the Bourse du Commerce et d'Industrie.

The grand cathedral on the left (north) is St. Eustache.

Angle right from St. Eustache, past the giant head and hand sculpture in Place Renè Cassin, and on to Allée St. John Perse. This will take you through the park to Rue Berger. Here, turn left (east). This pedestrian street takes you past the Forum Les Halles. 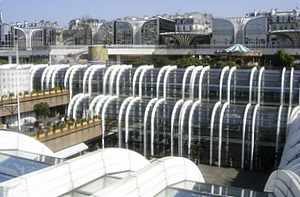 This area has been known as "Les Halles", The Markets, since the time of Louis VI. The lives of the people who lived and worked in the Les Halles during the 1850s have been captured in Emile Zola's novel "Le Ventre de Paris" ("The Belly of Paris"). For a chronicle of this neighborhood and the politics of Paris during the 19th century, this is the book to read. 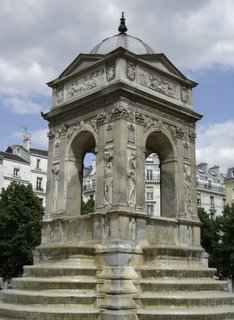 Once past the Forum Les Halles is the Place Joachim du Bellay, named for the French poet who lived between 1522-1560.

It is also known as the Square des Innocents, as this area was once the Cimetiére des Innocents, the Cemetery of the Innocents. Yes, this very busy and popular Square, consisting of 1036 square yards (870 square meters), built in 1860, now busy with people, skate-boarders, clothing stores and restaurants used to be a cemetery. In fact, it was the most important cemetery in Paris and held more than two million graves.

The Cimetiérie des Innocents was closed in 1785. All the bones that were buried here were moved to the Catacombs.

Here in the Square des Innocents is found the only Renaissance fountain in Paris, the impressive Fountain des Innocents, designed by Pierre Lescot and sculpted in bas-relief by Jean Goujon, built in 1549.

This Fountain has been moved three times. It was originally located, not far from where it is now, at the corner of Rue St. Denis and Rue Berger, called at that time, Rue aux Fers. It had only three sides as it was backed up against the Church Saints Innocents.

When this church was demolished, the Fountain was moved to the middle of the Market. At that time, 1788, a fourth side was added, built by Pajou and decorated with sculptures in bas-relief by Houdon. These sculptures are on the south side of the fountain.

The Fountain was moved once more to its present location in 1865 by Davioud and it was then set on top of four stairways of water cascading into a surrounding pool.

The Place Georges Pompidou is the place to watch all kinds of street theatre. Something is usually going on here, often several street performances competing for spectators. There are also many quick-character sketch artists. It is always entertaining here. 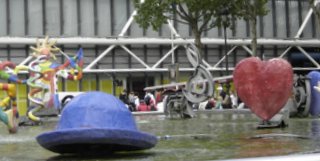 On the south side of the Pompidou Center (which is also called the Beaubourg, by the way), is Place Igor Stravinsky. In the Fountain Stravinsky, designed by Niki de Saint Phalle, are several large and colorful moving sculptures and fountains, themed to Stravinsky's works, that children often ride on in the summertime.

On the south side of Place Igor Stravinsky is the Eglise St. Merri.

East of the Pompidou center is Rue du Renard. Turn right (south) here. You will soon arrive at the Place de Hôtel de Ville and the Hôtel de Ville, the City Hall of Paris. This building is a spectacle in itself.

The original Hôtel de Ville was built in the 16th century by Italian architect Le Boccador. Louis Philippe later enlarged the building. In 1871, this building was destroyed by fire ignited by Communards. In 1882, the building of today was built and is a copy of the previous Hôtel de Ville.

The Place de Hôtel de Ville was formerly known as the Place de Grève, from the latin grevis, meaning sand. Where the Place met the Seine River there was a sandy beach. It was at this Place where workers would assemble in protest which brought about the expression, "se mettre en grève", meaning, "to go on strike".

Between 1310-1830, the Place de Grève was used for festivities, revolts and executions. These days, executions by governments are outlawed in the European Union and revolts have become historical events. Strikes, however, still occur in Paris, but usually take place in other parts of the city. The Place de Hôtel de Ville continues to frequently hold festive events.

Return to Top of Palais Royale to Hotel De Ville