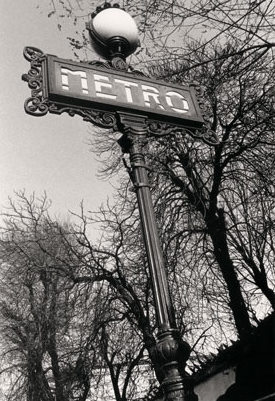 The Paris Metropolitain, or Paris Metro, is one of the most efficient and oldest subway systems in the world, the first line being completed in 1900. With some 3,500 cars the system moves approximately 6 million people a day.

All Metro lines run daily from 5:30 a.m. to around 40 minutes past midnight. During rush hours, the trains run about five minutes apart.

There are 14 lines and over 320 stations. You are never more than 500 meters from a Metro station in Paris.

Tickets can be purchased at the ticket counters located inside some of the stations. If there is only an information booth in the station there will be automated ticket machines available. All of these machines take coins or a micro-chip styled credit card. Only some machines are equipped to take bills. Do not be hasty in retreiving your credit card from the machine. Wait until the screen tells you to retreive it.

The day-pass, called a Mobilis, costs 7 euros for Central Paris, zones 1-2. The price increases when traveling through the outer zones. There is no children's price for this ticket.

There have been stories of some ticket agents who will not sell the Passe Navigo Découverte to tourists. It is useless to argue with them. Simply go to another Metro station. Tourists are eligible to purchase these passes, no matter what they say. These passes are not available through the automated ticket machines.

All Metro tickets are valid for use of the Buses and the RER, within Paris city limits.

ATTENTION TRAVELLERS TO CHATEAU VERSAILLES: Versailles is located in Zone 4, on RER line C. A one-way ticket costs 3.55 euros making the cost for a round-trip 7.10 euros. The name of the train is "VICK".

Always have a validated ticket when traveling on the Paris Transportation systems. Groups of Transportation Police frequently set up check-points in the tunnels of the Paris Metro and the RER and on-board the Buses. If you do not have a valid ticket you will be fined on the spot (they take cash or credit card) or be taken on a tour of the French judicial system starting with the local gendarmerie.

You may also need the ticket for exiting at some stations.

A selection of Paris maps are given for the asking at the Metro ticket counters. There are maps of the Metro, the Buses and the RER, which is the regional train system, special tourist maps and maps of the greater Paris area.

There is also a mini-metro map that folds up to a size smaller than a credit card.

Within the Metro cars, above the doors, is a linear map of the stops on that line, making it easy to determine when your stop is coming up.

On this map, an encircled number by a station name indicates a transfer point where you can change to another line. Once on the platform look for large "Correspondances" signs above the platform with the number, name and the direction of the connecting line.

Lines are numbered 1-14. They are color coded and named by the terminating stations of each route. This helps you determine the direction that you want.

On the walls of the tunnels, before you get to the platforms, are signs listing the stations accessed by that platform.

It may sound rather complicated and can be daunting at times, but, there are plenty of indicators, signs and maps common to all stations.

Understanding the Metro system is also a great reason to take our Paris Introduction Tour. Not only do we bring you to and explain the major sites of Paris but we take the mystery out of the Paris Metro, making it much easier for you to get around on your own.

For more detailed information try the Official Website of the Paris Metro.

Many stations are worth visiting for own their style and uniqueness.

For example, the Louvre-Rivoli station has samples of artifacts from the Louvre Museum.

The Cluny-Sorbonne has examples of the signatures of famous writers, scientists and artists.

In the Concorde station, on line #12, the French Constitution is written out in the tiles of the walls and ceilings.

The station Abbesses, the deepest of the metro stations, is equipped with an elevator of a forty person capacity.

The station at Arts and Métiers is designed in copper with porthole windows giving the impression of being in a Jules Verne submarine.