Paris facts: An overview of Paris shows that the City is a relatively flat place, making our Walking Tours a leisurely and enjoyable way to experience this most beautiful of European cities.

Other than the hill of Montmartre and the Belleville area, the terrain of Paris changes less than the height of a ten story building.

The highway that encircles Paris, known as the Périphérique, basically defines the city limits. It's about 22 miles around the Périphérique. The greater metropolitan area of Paris, the region of Ile de France,includes the suburbs around the city itself and covers an area of 4,661 square miles, 12,072 square kilometers.

Paris is divided into 20 districts called "arrondissements" and they are numbered 1 to 20.

For example, the first (and oldest) arrondissement contains about half of Ile de la Cité, theMusée du Louvre and the Jardin des Tuileries areas.

The other arrondissements spiral from this center in a clockwise direction.

This is the basic map of Paris arrondissements: 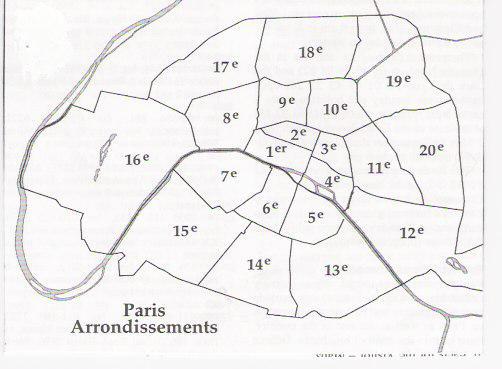 You will see permutations of this map all over the city. This is the first layer, so to speak. This basic map will be over-laid with a metro map, a street map, the bus routes, a monument map, a department store map, etc.

The Metro offers a variety of free maps available at the ticket windows. They are large, easy to read maps of the major streets, the Metro, Buses and the RER Trains , the municipal components of the Paris Transportation System.

For another example, below is a clickable map that will give you more detailed maps of each arrondissement.

We use these Google Maps throughout our pages to help you find the Museums,Monuments, Churches and Gardens in Paris: 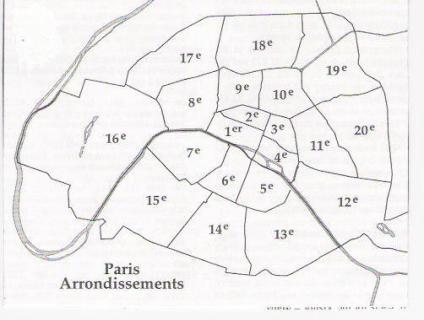 Getting to know this basic layout of the City will make your wanderings in Paris more enjoyable.

However, for thoroughly navigating your way through the City, a good street map is very helpful.

We offer these two recommendations:


This Leconte Edition of Paris map book is easy to read and easy to put away. It can be bought in the book department of BHV, the Bazaar Hotel de Ville, located on rue de Rivoli, directly opposite from the Hotel de Ville.

Streets signs in Paris are attached to the corner buildings and look like this:

See the number above the street name? That is the number of the arrondissement. Knowing that will help you keep your bearings.

Each arrondissement is divided into quarters or Quartiers("car-tee-ay") making for 80 distinct neighborhoods within the City.

The census of 2012 places the population of Paris at 2,265,246. The greater metropolitan area of Paris, the region of Ile de France, containing 8 departments, has an estimated population of 12 million people. The number of people living in France is 66.4 million.

People have asked, "When is the best time to visit?".

As for the weather, Spring and Fall are the most temperate. The middle of Summer can get rather hot and uncomfortable, which explains why many Parisians abandon the city to the tourists during August.

That said, because of the ocean influence on Paris, a mid-summer downpour is not uncommon. Though the Paris area has some of the lowest rainfall totals in all of France, you may still want to pack a small umbrella.

The almost clichéd movie-scenes of Parisians standing under doorways while waiting for the rain to stop is a very real occurrence. Often, the rain comes in short showers, so, it won't be long until it lets up enough to brave the sidewalks again.

The convenience of this is that when you look at the address of a hotel or restaurant and see the postal code, you'll have an idea of which part of the City it is located....more

The "+" symbol indicates the number you dial for an international line. For example, if you were calling from the USA with its international connection number being 011, you would dial 011-331-55-55-55-55.

If you were calling that same number from within France you would, of course, drop the international code and the country code of "33", replacing it with a "0" and dial 01-55-55-55-55. If calling a Paris number from within Paris, you still need to dial "01" first.

That is the meaning of the "0" in parentheses.

To use the public telephones in Paris a phone card must be purchased first. These are available at all tobacco shops and brasseries which sell tobacco. Newspaper and magazine shops also sell phone cards. They come in various price ranges starting at 7.50 euros which will give over 30 minutes of time.

On the public telephones, located below the receiver, is a slot to insert the card. Keep the card in the slot until you finish your call but, don't forget to retrieve it when you are through.

An essential of Paris facts is the electrical current. In Paris, as well as all of Europe, the current is 220-240 volts/50 Hv. The electrical outlets accept both double and triple-pronged plugs, sometimes both, sometimes only the double-prong plug.

Electrical conversion adapters can be purchased before you leave home, or they can be bought when you arrive in Europe.

And, speaking of Paris facts, there are 6,100 streets in Paris.

Return to Top of Paris Facts