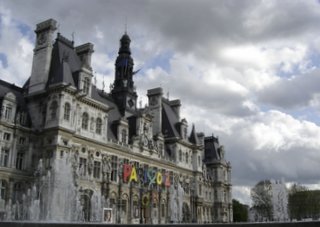 Hôtel de Ville is the center of the municipal government, the City Hall of Paris.

The large Place Hotel de Ville in front of the building undergoes many transformations during the year.

In winter, an ice-rink is installed and during summer it is made into beach-volleyball courts for Paris Plage, Paris Beach, a very popular event, inaugurated by Mayor Bertrand Delanoë, which has inspired similar events in capital cities around Europe.

Originally called the Place de Grève, it was a gently, sloping beach which served as the first river port in Paris for the unloading of wheat and wood and other goods. Along with the selling and transporting of these materials, the Place became a place of hiring, of labor disputes and of airing civic grievances. Today, the French word "greve", originally meaning a flat, sandy or gravely river or sea shore, now also means a labor strike. Place de Grève was also used for public executions.

This is where Ravaillac, Henri IV's murderer, was hung, drawn and quartered, and where other heretics and prisoners, such as La Brinvilliers and La Voisin, were burned at the stake. During the French Revolution, a guillotine was installed and quickly put to use. The last execution on the Place de Grève took place in 1830.

In 1533, François I decided to build the city a Hôtel de Ville, a City Hall. He appointed two architects: an Italian, Dominique de Cortone, nicknamed Boccador, because he had a red beard, and a Frenchman, Pierre Chambiges.

Construction began in 1533 and was not finished until 1628 during the reign of Louis XIII. During the following two centuries, no changes were made to the building. In 1835, two wings were added to the main building.

This first Hotel de Ville came to a tragic end. During the revolt of the Commune in May 1871, fires were set to several symbolic buildings in the city including the Tuileries Palace, The Cour des Comptes (Audit Office) and the Hotel de Ville. Here, the fire burned for eight days. The city's archives and its art treasures here were completely destroyed.

After the fall of the Commune, the government decided to rebuild the Hotel de Ville. A competition was held and won by two architects, Ballu and Deperthes, who had opted for an identical reconstruction of the old building.

A national subscription fund brought in the necessary money and the building was finished in only eight years.

It has a twofold function: as the seat of municipal administration and as a place where large receptions can be held.

The building is decorated with 108 statues, representing famous Parisians and 30 other statues representing French cities.

The clock at the central tower is adorned with several feminine sculptures representing the Seine River, the City of Paris, Work and Education.

During lunch hour, the areas around the fountains will fill with people lunching, reading their journals and taking a small break from their work day.

It's a remarkable place to enjoy the grandeur and the history of Paris.