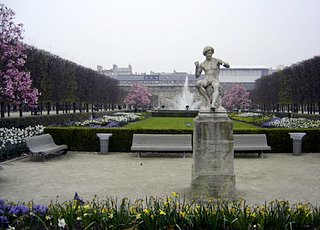 The Garden of the Royal Palace, le Jardin du Palais Royal, has a long royal and a not so royal history.

Enclosed as it is by the Palais Royal, a courtyard and arcades, it is not an obvious garden, not a garden one notices from a distance.

In 1624, Cardinal de Richelieu bought the old Hôtel Rambouillet and surrounding properties. These buildings were removed and the Palais Cardinal was built with a large adjoining garden.

When Cardinal de Richelieu died on December 4, 1642, he bequeathed this property to the crown.

Louis XIV officially gave the deed and ownership to his brother and the family d'Orléans lived here until the Revolution.

In 1781, the Duc d'Orléans, later known as Philippe-Egalitié, who also owned the Parc Monceau, commissioned architect Victor Louis to enlarge the palace and shrink the garden, allowing for the construction of houses with regular arcaded facades on three sides of the garden. 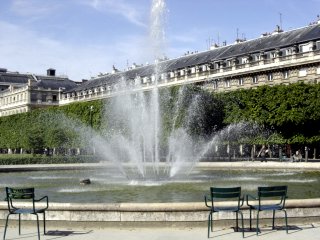 The construction was completed in 1784. To pay for the reconstruction, the duc d'Orléans built boutiques under the arcades and rented them.

While Philippe-Egalitié opened the Jardin du Palais Royal to the public, he prohibited it to the police. It thereby became a place of liberty not found anywhere else in Paris and a gathering place for intellectuals and artists.

The arcades were lined with shops, cafés and gaming houses and the first House of Wax. Crowds flocked to what had become the most popular gathering place in Paris.

There were two theatres at either end of the Jardin du Palais Royal, as there are now. On the south-west corner now sits the Comédie Française, as it did then. It was commissioned by Cardinal Richelieu and designed by Lemercier around 1641. It was the theatre which Molière produced his plays from 1660-1673. Afterwards, the theatre held operas. 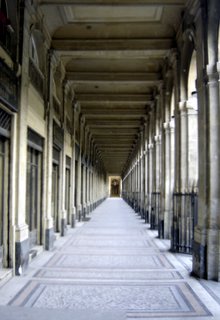 The second theatre which sits on the north-west corner of the garden is the Théâtre du Palais Royal.

In 1789, the Jardin du Palais Royal was the liveliest place in Paris. People came here to get the latest news and political rumors. It was a place of speeches, discussions, drinking and gaming.

Here, on July 12th, 1789, Camille Desmoulins, a young lawyer, jumped on a table in the Café de Foy and broke the news that Jacques Necker, the popular Minister of State, had been forced to resign. Desmoulins called out, "Aux armes, citoyens!" ("To arms, citizens!"). Two days later, the Bastille was taken.

When Philippe-Egalitié was guillotined in 1793, the Palais Royal and Garden became National Domain. Gambling houses were closed by the authorities in 1836. The Palace was invaded and pillaged in the Worker's Revolution of 1848. The Commune of 1872 ignited fires in the buildings which were not restored until 1876. 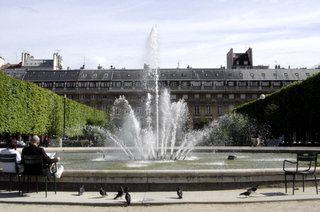 Soon after, the Palais Royal was shared by the Conseil d'Etat, the State Council, and the Secrétariat d'Etat aux Beaux Arts, the Secretary of State of the Arts. In 1958, the Constitutional Council moved in and the Ministry of Cultural Affairs was formed by André Malraux.

The Garden of Palais Royal still has colonnaded arcades on three sides and the Cour d'Honneur, the Court of Honor, on the south side. The walkways are still mosaic and there are still the 180 hanging electric lamps. 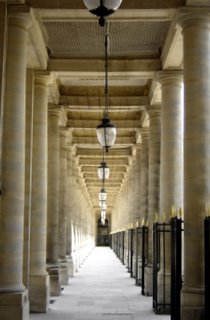 There are shops selling women's clothing, jewelry, antique knick-knacks, historical figurines and even up-scale gardening tools. There are art galleries, two cafés and three restaurants under the arcades, one of which being the Restaurant Vefour, the only remaining establishment from the Garden's pre-Revolutionary days. 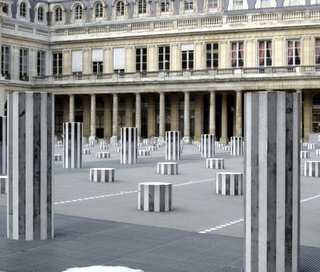 The Court of Honor was modernized with stripped black and white posts, short and tall, in the mid 1980s, though the State had tried to rescind the contract with the designer, David Buren, during its construction. 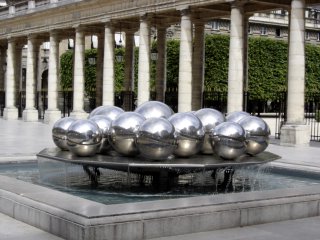 The Fountains of Pol Bury are found here, in the Gallery d'Orléans which separates the courtyard from the garden. Since 1990, the traditional noon-cannon sounds every day. 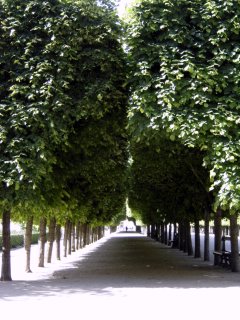 A double-row of trees runs along both sides of the Garden and provide the most cooling outdoor shade to be found during August.

There are two stretches of fenced lawns between these rows of trees and are bordered with flower beds. On both ends of each lawn are enclosed sitting areas with benches. Two of these sitting areas are adorned with a weather-beaten statue; one is of a goat-boy and the other is a playful youth. 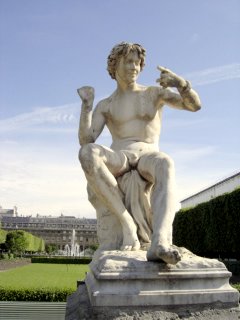 In between the two lawns is a circular pond with a fountain. It is a lovely area for enjoying the sun and the sound of splashing water. On the north end of the north lawn is a sandbox for children and their parents.

And here's some good news: Dogs are not allowed in the Jardin du Palais Royal. This is one of the few outdoor spaces in Paris where you don't have to worry about what you might be stepping in.