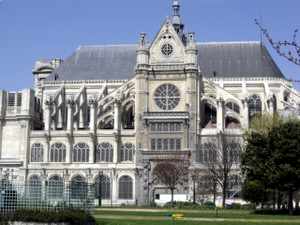 The Church of Saint Eustache has a long and interesting history, as does the area in which it stands.

In 1213, a businessman, Jean Alais, lent to King Philippe Auguste a significant sum of money. In order to re-pay the loan, the King authorized a tax to be paid to Jean Alais for every basket of fish sold in the market.

The income from this tax was so great that, as thanks for his good fortune, Jean Alais built a chapel there dedicated to St. Agnes, a 4th century virgin martyr.

The markets of Les Halles were originally located where the boats unloaded in front of Hotel de Ville. In 1108, Louis VI moved the markets to the area where the Fountain of the Innocents now stands. In 1183, Philippe Auguste built two large halls there for the clothier trades and, in 1265, his grandson Louis IX, St. Louis, built two more great halls for the sale of fish.

This great market of the middle ages became a lively and vibrant center of social life.

It was renamed for St Eustache, a 2nd century Roman martyr, whose relics were donated to the parish by the Basilica of St. Denis.

St Eustache is a patron saint who is invoked in times of family troubles. He is also the saint for hunters as he saw a vision of Jesus between a stag's antlers that he was hunting.

At the time, Eustache was a Roman General and his name was Placidus. After this vision, he became a Christian and changed his name to Eustatius, meaning "good fortune".

Soon after, his wealth was stolen, his servants died of the plague, his wife was kidnapped and his two sons were dragged away by a wolf and a lion. When his wealth was returned and his family somehow reunited, Eustache refused make a pagan sacrifice in thanks, due to his Christianity, so the Emperor Hadrian had Eustache and his family roasted to death.

In 1435, and again in 1495, the church was enlarged, thanks in great part to the merchants of the area, and the parish of St. Eustache became one of the largest and richest parishes in Paris.

On August 9, 1532, the first stone of the present building was laid. The building was completed in 1637 and was the last church in Paris to be built in the Gothic style. 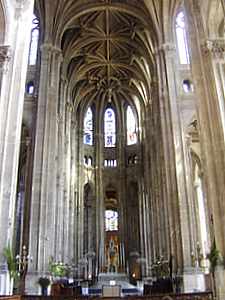 During the Revolution, the church of St. Eustache was turned into a Temple of Agriculture. The church was restored in 1795 and the vault of the Virgin was restored and completed in time for the visit of Pope Pius VII in 1804. 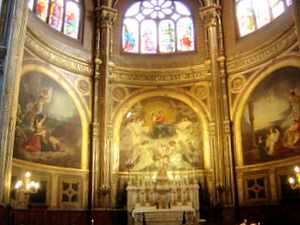 The Commune of 1871 caused significant damage to the bell tower and the new renovation found it necessary to reinforce the roof and the buttresses.

Emile Zola's novel, "Le Ventre de Paris" ("The Belly of Paris") captures the daily life and politics of the markets of Les Halles during the mid-19th century.

In 1969, the old markets were destroyed and replaced with the Forum des Halles, an immense shopping mall soon to be reconstructed itself. The Jardin des Halles, the Garden of Les Halles, is also part of the area of the old market. The Bourse, the Paris stock market, is located nearby.

St Eustache remains a parish church of the area. There are, on occasion, free concerts in the church. It is renown for its excellent organ.

Return to Top of St Eustache