The Louvre
One for the Ages 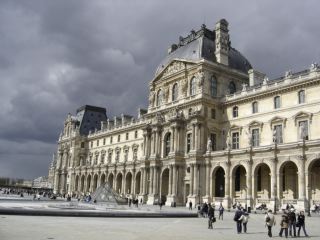 Tours of the Louvre

2) from rue de Rivoli.
3) by stairs leading down on either side of the Arc de Triomphe du Carrousel.

Another entrance during regular hours, though closed on Friday, is through the Porte des Lions, located in the southern wing.

The Passage Richelieu has an entrance during regular hours for those who already have tickets for the museum.

The Louvre does have some regulations and there are many museum employees to enforce them. These regulations are mostly designed for the protection of the immense and valuable collection.

If your style of visiting museums is to simply wander, allowing your curiosity to lead you, then the Louvre is a perfect place to let your feet take you where they will.

If, however, there are particular pieces and works of art that you want to see, then it is to your benefit to make use of the informative plans and maps available at the Information Desk in the main lobby, under the magnificent Pyramid entrance. 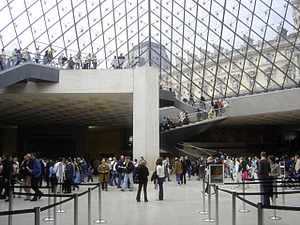 The plans come in many languages and clearly show the layout of the three main wings of the museum.

Along the hallway, in the underground Carrousel du Louvre, is the very useful Cyber-Louvre, with computer terminals and on-line information about the museum.

The Louvre began as a fort, built in the late 1100s and early 1200s by King Philippe Auguste, along with the City's first enclosure wall made of stone, to defend the banks of the Seine river against invaders from the north.

The square fort made of thick, high walls, had at its center a cylindrical tower, the Donjon, or the Keep. Archaeological discoveries of the original fort are part of the Medieval Louvre exhibit in the Sully wing of the museum.

This fort was enlarged and beautified in the 14th century by Charles V, making it the most celebrated castle in Europe of its time. This, however, was partially demolished in the 16th century by François I to make room for a grand new structure built in the Renaissance style.

In 1567, Catherine de Medici built a château to the west called the Palais des Tuileries.

During the reign of Henri IV, the Grand Gallery was constructed connecting the Palais du Louvre to the Palais des Tuileries, which today is the Denon wing and houses the collection of Renaissance paintings of Italian and Spanish artists.

In the early 17th century, Louis XIII razed the north wing of the medieval Louvre fort and replaced it with a continuation of the Lescot wing. His architect, Jacques Lemercier, created the domed Pavillion de l’Horloge, the Clock Pavilion.

Louis the XIV completed the enclosure of the Square Court, the Cour Carée. However, work was discontinued when he abandoned the Louvre for Versailles in 1678. The north, south and east buildings of the Cour Carée were left without roofs until 1756 when Louis XV picked up where Louis XIV had left it.

Called the Central Museum of the Arts, the Louvre opened to the public as a museum on August 10, 1793, by making the exhibits of the Academy of Painting permanent along with collections of French aristocracy who had left France. The exhibition areas were the Salon Carée and the Grande Galerie.

Following the Revolution, Napoleon I and subsequent rulers of France lived in the Tuileries Palace and the Louvre was used as an office building for the French Ministry and as a museum.

During the uprising of the Paris Commune in 1871, the Tuileries Palace, the seat of aristocratic power of the time, was set ablaze and destroyed. This actually opened up the wonderful view that is enjoyed today of the Grand Axis, through the Arc de Triomphe du Carrousel, the Tuileries Gardens and the Place de la Concorde, on to the Arc de Triomphe and, on a clear day, to the Grande Arche de La Défense.

In the 1980s, the Louvre underwent a major renovation and expansion. The main entrance was completely relocated and crowned with the glass pyramid designed by architect I.M. Pei. It caused a stir of controversy, as remarkable things do, but has since proven to be quite a success. The pyramid has become another icon and admired structure of the Paris landscape. 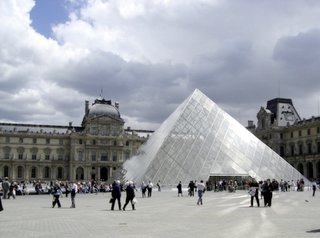 In 1993, the Richelieu wing of the museum was unveiled making the Louvre the largest museum in the world with an exhibition area of nearly 60,000 square meters, 15 acres or 645,800 square feet.

The vast and comprehensive collection of the Louvre Museum is difficult to fathom. There are over 30,000 works of art on display and more than 3 times that many articles cataloged in the collection.

The collection spans centuries of artistic excellence. The oldest artifact in the museum is 9,000 years old. It was discovered in Jordan in 1985 and is known as the "Statue from Ain Ghawn". 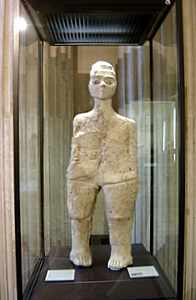 The permanent collection of the Louvre is organized into eight sections, each exhaustively covering a period or theme in the history of the arts.

Recently, the Official Louvre Website completed the creation of its on-line catalog and data-base of the permanent collection. For a truly comprehensive experience this site is highly recommended.

History of the Collection

The Louvre was not originally intended to be a public museum. As a royal residence, the collections of antiques, drawings and paintings, first set up by Louis XIV in 1671, were reserved for the privileged few.

When Louis XIV left the Louvre for his chateau in Versailles, it became a "Palace of the Arts" and was used by resident artists. The Palace of the Muses or "Musée", where one could view the royal collections, was born in 1747.

The "museum" concept was quite new at the time, but, with the influence of the Enlightenment, its time had come. The arts were becoming the right and the patrimony of the people and a new egalitarian spirit opened up a world once reserved for royalty.

The French Revolution was to accomplish the already advanced plan of making the existing collections accessible to the public.

A commission was entrusted with the job of organizing the "Musée Central des Arts", which opened in 1793. Apart from the collections of the king and those of the Academy, it included property seized from the Church.

After 1794, many works of art came to the Louvre as spoils of war. Masterpieces from Italy arrived in Paris in July, 1798. Due to the great number of these, the museum had to be reorganized.

It continued to grow under the management of Vivant Denon, through commissions, purchases and war booty. However, after Napoleon's defeat the collection shrank dramatically since many works were returned to their country of origin and former owners.

Under the Restoration, the museum, which had lost its chief works, began a very active campaign to restore the collection, beginning with the "Venus de Milo".

Renaissance and Modern sculptures from the Musée des Monuments Français (1824), Egyptian works collected by Jean-François Champollion (1826), the Musée Naval (1827), the Spanish collection of Louis Philippe and Assyrian antiquities originating from the excavations of Paul-Emile Botta (1847) were added.

The Second Republic and the Second Empire of Napoleon III expanded the collection even further.

The museum, more of which was opened to the public, continued to expand its collections. New departments were added, such as the Etruscans, Ancient Greece and the Ancient Orient.

During the reign of Napoleon III, architect Visconti completed the Palace. The Nouveau Louvre, which was inaugurated in 1857, finally completing the "Grand Dessin", the Grand Design. That is, until the fire in 1871 burned down the Tuileries Palace.

In 1882, the Tuileries Palace ruins were demolished finalizing the end of the Louvre's function as a palatial residence.

As a national museum, the Louvre has continued through the 20th century to enrich and display its collections.

By the 1970s, the popularity of the museum had outgrown its available space. In 1986, most of the post-1848 works of French artists were moved to the new Musée d'Orsay, which was established on the opposite bank of the Seine river. Renovations then began on the Louvre.

In 1989, the new design was to allow as many people as possible to gain access to the museum. The grand reception area under the Glass Pyramid is a very impressive and welcoming introduction to the museum.

By re-vitalizing its function as a museum, the Louvre Palace has rediscovered a rich and animated life in the heart of the city. 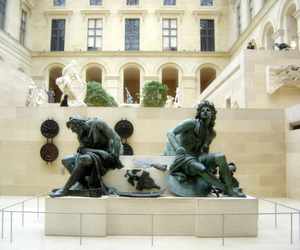