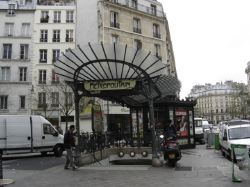 The Paris Transportation System is an integrated network of:

Regional Airports, or by train from another European destination, you will find the Paris Transportation System provides a variety of ways for getting you in and around the city.


The public transportation system of Paris is efficient, convenient and reasonably priced.

It consists of four networks, inter-linked to provide access to every area of the city and on to the surrounding suburbs.

The underground metro is the heart of the system within Paris proper. It is efficient and relatively inexpensive with stations of varying sizes from the vast labyrinth of Les Halles to the simple stop of Alma Marceau.

The metro seamlessly interacts with the vast system of buses, allowing access to the most remote of the city's quarters.

More widely spread through the City are the stations of the RER providing transportation to the suburbs surrounding Paris.

These networks are the:

The RER has 5 train lines that service the city as well as the surrounding suburbs. The RER will bring you in from outside Paris and will take you quickly across town.

It connects with the Paris Metro system, a network of 14 lines with nearly 300 stops so you are never more than 500 meters from a station.

On the streets, the Paris Bus system consists of 266 lines serviced by over 4,000 buses.

Within the city limits of Paris Transportation, the same ticket is used by all four of these systems. Tickets can be purchased at Metro and RER stations, on the Bus, or at all of the tobacco shops around the city.

Single-use tickets are available either individually or in packets of ten, called a carnet ("car-nay"), which costs less than ten tickets sold individually.

For door to door Paris Transportation, Paris has 15,900 licensed Taxis.

For sight-seeing, there are two bus services, distinctive in that they use double-decker buses, the top deck being open-air, which on warm days makes for a pleasant way of seeing the city.

There are also companies that offer Boat Cruises up and down the Seine river. These offer commentaries on the many sights along the way. The Bateaux Parisian also offers lunch and dinner cruises.

You can also take a water-taxi that has eight stops along the river, called the Batobus.

Paris boasts over 100 kilometers of bicycle lanes, not including the lanes in the two largest parks, the Bois de Boulogne bordering the western edge of the city and the Bois de Vincennes on the eastern edge. Bicycle rentals can be made at a number of locations. Hourly, daily or weekly rentals are available.

And, of course, there is walking. That's where we come in.

Return to Top of Paris Transportation