Paris Customs
A Little French Etiquette
Some Do's and Don'ts

We’ve all heard stories of unfriendly waiters and the stuffy Parisians.

Well, a lot of what we've heard may be attributed to a difference in customs.
Parisians tend to be a very polite people. It may all be a matter of getting used to Paris Customs.

It all begins with the basics like "please", "s’il vous plait" (seel-voo-play) and "thank you", "merci" (mair-see).
It's surprising how often tourists just don't use these words.

When walking into a shop, café or restaurant it is one of the Paris Customs to greet the shopkeeper, bartender or receptionist with a "good day" or "good evening"; “bonjour"(bohn-jhur) or "bonsoir" (bohn-swah) "Monsieur or Madame”, (muh-syur, or muh-dam). When leaving it's “Merci, au-revoir” (ohr-ev-wah).

Paris customs dictate that the one entering the establishment makes the greeting, so make the effort to initiate the greeting. If not, it's like when an actor forgets his line. There's an awkward silence and then: nothing.

Use "Monsieur" and "Madame" often, including when speaking to service people. It's another of the Paris Customs and it really does make a favorable impression.

One of the more obvious of Paris Customs is, of course, speaking French. Learning and using a few phrases can open doors and broaden your French experience. The Parisians will know that French is not your first language but they will appreciate your making the effort.

We've found a course that for less than a single night's stay in a Paris hotel you can learn to speak passable French in eight weeks.

This course can be purchased as a download, is easy to use and an excellent value.

One of the more recent of Paris customs is speaking English. You will have no troubles being understood speaking English, from your hotel to the roving street markets. Still, it's fun speaking another language. Where-else are you going to be able to say bon-jour to someone and not have them think you're a snob?

Paris Customs on the Metro

Paris Customs on the Streets

Things to Look For and Look Out For 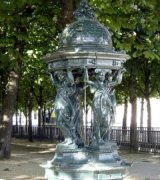 
There are also those who are actually in need. They tend to rely on the locals, not the tourists. You'll see the difference.

Our intent here was to warn you of tactics used by professional scammers.

As tourists, we are targets. Be alert, not afraid.

Keep the above warnings in mind and you should have no troubles.

Return to Top of Paris Customs