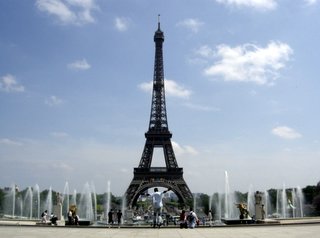 This walk along the Seine River takes you from the Eiffel Tower to the Musée d'Orsay.

You will pass by the Palais de Chaillot and Les Invalides.

Take the RER line C to the Champ de Mars-Eiffel Tower station. Or, take Metro line #6 to the Bir-Hakeim station and then cross the street, called quai Branly, to get to the river.

Here is a wide pedestrian path, right along the Seine river, though elevated from it, and stretching for miles with lawns, flower gardens and trees, benches and playgrounds. 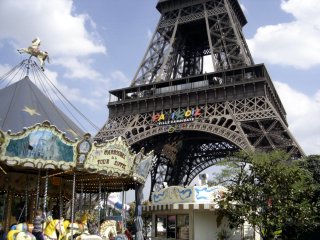 Begin walking eastward, up-river, and you will pass directly in front of the Eiffel Tower. Here, at the bridge, Pont d'Iéna, is a colorful carousel and concession booth, giving the atmosphere of a small fair.

Across the river is the curved Palais de Chaillot, with it's impressive water fountains and sculptures.

Soon past the Pont d'Iéna is the three pillared National Memorial of the War of Algeria 1952-1962 and of the Combatants of Morocco and Tunisia. On these pillars is a continual digital listing of the names of those fallen in battle.

Continue eastward and you will see one of the newest museums in Paris. It is the Musée du quai Branly. It opened in June, 2006. It's focus is the arts and cultures of Africa, Asia, Oceania, and the Americas.

Opposite this museum is a pedestrian bridge called Passerelle Debilly. If you go this way, just when you come to the end of the passerell, you will find a pedestrian underpass for crossing the busy avenue de New York.

After coming up on avenue de New York you'll see, just to east, the stairs that lead up to the Palais de Tokyo, which houses the Musée d'Art Moderne de la ville de Paris and the Site de Creation Contemporaine. 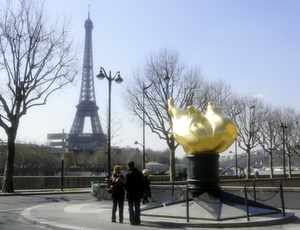 Across the river on this bridge, at the Place de l'Alma, is an exact replica of the Torch from the Statue of Liberty.

Since 1997, this has become a place of homage for Princess Diana, as it is directly above the roadway underpass where she and Prince Dodi Fahid had their fateful car accident.

Across the Pont d'Alma, (where quai Branly now changes names to quai d'Orsay), is the entrance for taking the tour of the sewers of Paris, Les Egouts de Paris.

Just beyond is a small children's playground. Past here, on the other side of the street, is the American Church in Paris. Classical music concerts are performed here, free, every Sunday evening at 5 p.m.

The next bridge you come to is the Pont des Invalides, and soon after, the ornate Pont Alexander III. 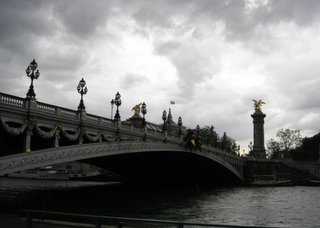 Across the river, the large, glass-roofed building on the left (west) is the Grand Palais, and on the right (east), with the slated dome roof, is the Petit Palais. 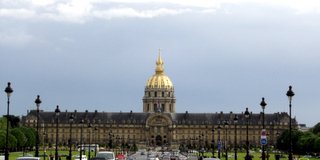 The Esplande des Invalides is a large park, with lawns that are greatly used. Frequently, there are neighborhood soccer games going on and the large asphalted area is used by roller-bladers and skate-boarders.

In front of the Air France building is the entrance to the RER station, Invalides.

Just past the Esplanade des Invalides is the Assemblée Nationale,the National Assembly, and the Pont de la Concorde. From the bridge is a view of the expanse of the Place de la Concorde, across the river.

Just to the right, south, of the Assemblée Nationale, down Rue Aristide Briand, is the the National Assembly bookstore.

By continuing straight ahead, you will be on boulevard Saint Germaine where, in a few steps, is the metro station Assemblée Nationale, on line #12.

Continuing along the quai, which is now called quai Anatole France, you will come to Passerelle Solferino, a pedestrian bridge, and a wonderful access into the Jardin des Tuileries, Garden of the Tuileries.

Return to Top of Walk Along the Seine River