Assemblee Nationale
The National Assemby In the Palais Bourbon 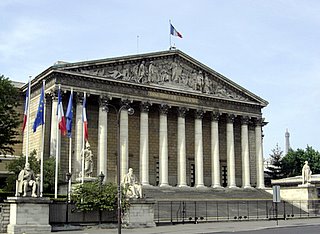 The Assemblee Nationale, the National Assembly, was formed in 1789 and developed a constitution which restricted the powers of the king, bringing sovereign power to elected representatives of the nation.

The Assembly was empowered to enact laws, control taxation, manage public funds, ratify treaties and declare war. The king retained executive power and could block enactments of the Assembly for up to two years.

In 1814, Louis XVIII restored royal sovereignty. The Assembly, now divided into two Chambers, could be convened and adjourned as the king wished, giving the Chambers no real governmental influence.

However, in 1830, a new charter was enacted developing a unified sovereignty between elected representatives and the king.

Under Napoleon, the Assemblee Nationale was divided into four assemblies, weakening its impact and thereby strengthening Napoleon's.

After the fall of the Empire, the constitutional acts of 1875 provided the foundation of the parliamentary system which would progressively become more entrenched over the next several decades.

The Constitution of 1946 established parliamentary sovereignty. The elected representatives, once again being known as the Assemblee Nationale, determined its own convening and order of business.

In 1958, under de Gaulle, parliamentary powers were more exactly determined, which have continued until today.

The National Assembly occupies the Palais Bourbon. It was built between 1722-1728 by Louise Françoise de Bourbon, who was the legitimized daughter of Louis XIV and Madame de Montespan. Hardouin Mansart and Italian architect Giardini began the construction. When Giardini died 2 years later, Jacques Gabriel completed the project. In 1765, the prince de Condé transformed and enlarged the palace under the direction of architect Soufflot.

Next door to the palace is the Hôtel de Lassay, which the marquis de Lassy constructed around this same time.

After the Revolution, the palace became national property. It was used by the Council of the Five Hundred from 1798.

In 1827, the chamber was reconstructed, corridors and adjoining rooms were re-arranged and a library was installed, which was decorated by Delacroix, as well as one of the salons.

Since the inauguration of this new chamber in 1832, most of the first parliamentary assemblies have sat there. The exceptions being during the Second Republic, when there were so many members they had to re-locate to a temporary chamber set up in the courtyard, and from 1871-1879, when it was held in Versailles and during World War II.

Return to Top of Assemblee Nationale