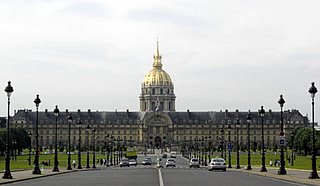 Built by Louis XIV as the first hospital and retirement home for veterans of war, it continues to be so today. It is also the location for several museums pertaining to the military history of France.

King Louis XIV selected the design of architect Libéral Bruant and construction began on November 30, 1671. Hotel des Invalides was basically completed in three years and the first disabled soldier moved into it in October, 1674. 6,000 other soldiers soon followed.

It was enlarged in 1676, giving the complex fifteen courtyards, the largest being the Cour d'Honneur, Court of Honor, which was used for military parades. 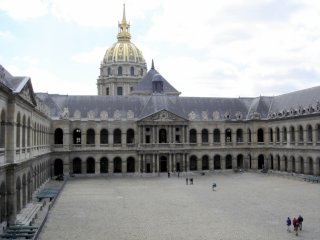 The Cour d'Honneur continues to be used as a setting for military parades as well as ceremonies for awards and decorations and for concerts.

The courtyard is 102 meters long and 64 meters wide. It is lined with two rows of arcades. 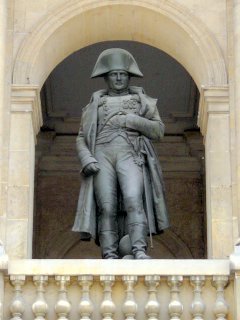 A large statue of Napoleon I, created by Seurre in 1833, stands on the upper floor in a large arcade, looking out across the courtyard.

This statue was originally standing on top of the Colonne Vendôme. It was brought here in 1863. 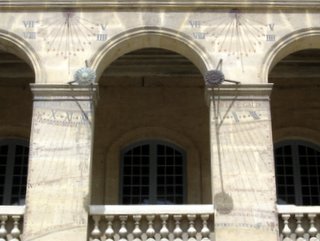 The courtyard has three wall sundials. One on the north façade, one on the east façade and the third is on the west façade.

The upper floors of the structure enclosing the courtyard is a memorial to those who have served and fallen in France's wars since the 19th century. 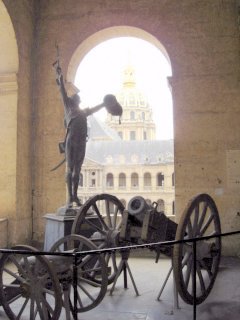 Plaques line the walls honoring such as: "Les Forces Feminines Français"; "des Formations Sanitaires", those who carried off the field the wounded and dead; "For the Foreigners Fought in France, for France" such as natives of Poland, Holland, and the United States. The Resistance of the Swiss Volunteers are honored, as is the Red Cross, its nurses and ambulance drivers. 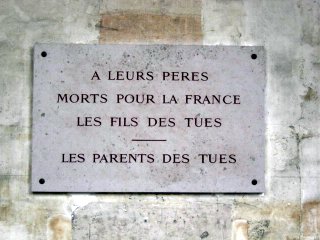 Even the families of the dead are remembered. Roughly translated this plaque reads, "To Their Fathers, Dead for France, The Sons of Those Killed, The Parents of Those Killed".

The lower floor of these buildings have on display cannons and transport vehicles from times gone by. 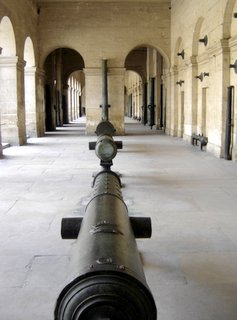 Jules Mansart modeled the dome after St. Peter's Basilica in Rome. Construction began in 1706 and was completed in 1708 by Robert de Cotte after Mansart had died.

The height of the Dome is 107 meters, 350 feet. It was re-gilded in 1989 using 12.65 kilograms of gold which came in the form of 550,000 leaves of gold at .2 microns thick. The Eglise is widely recognized as the finest example of 17th century religious architecture in Paris. 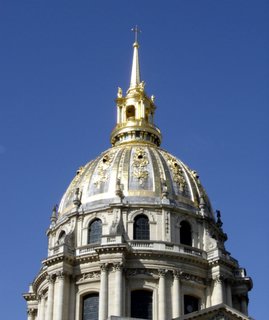 Today, Napoleon Bonaparte is entombed in the Eglise du Dôme, as well as some of his family and other famous men of war. Napoleon I was originally buried on the island of Saint Helena, where he died in exile, May 5, 1821. In 1840, King Louis Philippe had his remains brought to Paris and on April 3, 1861, he was placed in the Eglise du Dôme.

A list of those entombed at the Eglise du Dôme:

From the north front of Les Invalides, the dome of the church dominates the long façade of 200 meters, 220 yards, and seems to be part of the same building, yet the courtyard, the Cour d'Honneur, over 100 meters long separates them.

At the north end of the Esplanade is the Pont Alexander III bridge. Across this fabulously ornate bridge are the Petit Palais and the Grand Palais.

It is closed on the first Monday of the month, January 1, May 1, November 1 and December 25.

Admissions are a combination ticket for the Musée de l'Armée, the Museum of the Army, and all the other museums here, as well as for Le Tombeau de Napoléon, the Tomb of Napoleon, and the Eglise du Dôme.

There is no charge for entering the grounds or the courtyards.

Bordering the Eglise du Dôme in the south-west corner of the grounds Hotel des Invalides is the Jardin de l'Intendant, Garden of the Steward.

Hotel des Invalides is part of our Private Guided Tour Trocadero to Invalides.