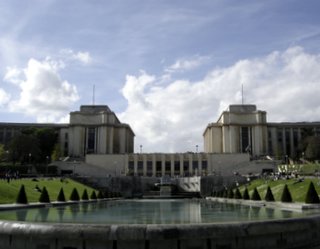 In the 16th century, atop of the 65 meter (230 feet) Chaillot Hill, Catherine de Medici built a "country cottage" for herself.

In 1651, this country cottage was acquired by England's Queen Henrietta where she founded the Convent of Visitation. In the early 19th century, Napoleon I had this convent demolished so as to build a palace there for his son.

This palace was never built.

For the International Exposition in 1878, the Trocadéro Palace was built, designed in a Moorish style by Gabriel Davioud. It was also at this time that the Trocadero Gardens were created. The Trocadero Palace was replaced in 1937 by the Palais de Chaillot, which stands there today.

The Palace was designed by architects Léon Azéma, Jacques Carlu and Louis-Hippolyte Boileau. It was built for the 1937 Exposition Universelle. The Trocadero Gardens were re-designed at the same time.

The Palais de Chaillot is composed of two large curved buildings, separated by a wide, marbled and elegant plaza. The two buildings trim the plaza with columns and gilded statues.

In April, 2005, on the 60th anniversary of the liberation of the concentration camps of WWII, this plaza ceremoniously received an engraved marble plaque, distinguishing this plaza as the "Place of the Liberties and the Rights of Mankind", as was proclaimed by President François Mitterand on May 30, 1985.

The building on the east is the home of the Thêatre National de Chaillot. At one time, it also held Musée de Cinéma Henri Langlois and the Musée National des Monuments Francais, both of which are no longer there.

The Musée du Cinéma has re-located to 51 rue de Bercy, near metro station Bercy, and opened in Autumn, 2005.

Just opened in September, 2007, in this east building of the Palace, is the Cité de l'Architecture et du Patrimoine, the City of Architecture and Heritage.

The Palace of Chaillot is located in the Place du Trocadéro and can be reached by the metro station Trocadéro, metro lines #9 and #6. 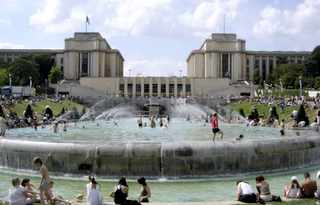