Musee d'Orsay
Once a Train Station 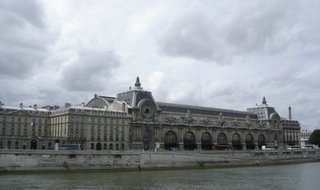 The Musee d'Orsay, the Orsay Museum, is one of the most pleasureable museums in Paris. Its early life as a train station, the Gare d'Orsay, gives it a structure which invites people to enter and enjoy a journey through a most remarkable period of art history.

Entering through the main hall, one is struck by the openness of the museum, the play of light and the wonderful display of sculptures.

The wide aisles, the mezzanine and the absence of architectural obstructions affords excellent views of the main hall of the museum.

The atmosphere is relaxed and leisurely. There is much to see here, but, it's not the Louvre. One can wander through this entire museum with one visit.

The Musee d'Orsay has a beautiful restaurant and two cafés, one with an outdoor terrace overlooking the Seine river and the Tuileries Garden. 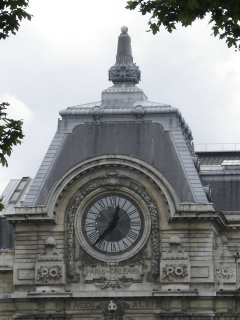 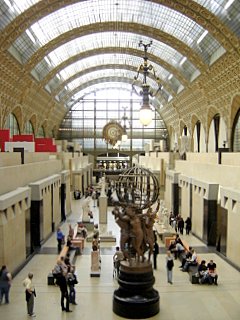 History of the Area and the Building

Rue de Lille, which runs behind the Musee d'Orsay, was once the central lane of the garden belonging to Henri IV's estranged queen, Marguerite de Valois. After her death in 1615, the property was subdivided and private mansions were built.

The banks of the Seine were then a port for lumber barges and other cargo.

The construction of the Quai d'Orsay began in 1708 near the Pont Royal, and was completed a century later under Napoleon I's Empire.

The neighborhood continued to attract the upper classes and many fine mansions were built in the area. Between 1782 and 1788 the Hôtel de Salm was built which today is the Museum of the Legion of Honor, located just opposite the main entrance to the Orsay Museum.

Two buildings occupied the site of the Musee d'Orsay during the 1800s; the cavalry barracks and the Palais d'Orsay. During the Paris Commune of 1871, the entire neighborhood was burned down. For the next thirty years, the ruins of the Palais were left untouched. 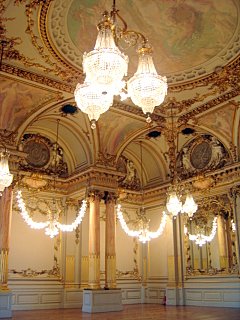 In 1895, the French government sold the land to the Orléans railroad company which desired to have a more centralized station for the trains from the south. A competition for the commission of building the station was won by architect Victor Laloux.

The station and its hotel were built within two years, completed in time for the World Fair on July 14th, 1900.

Laloux hid the metal structure of the station with the facade of the hotel. The facade was built using cut stone blending with the style of the neighborhood.

The station itself was state-of-the-art for the period, incorporating ramps and elevators, sixteen underground railway tracks and an inviting great hall.

It was a great success and the building was admired for its beauty as much as for its functionality.

From 1900 to 1939, the Gare d'Orsay was the head of the southwestern French railroad network. The hotel was used by travelers and was also a convention site.

However, after 1939, the station was only serving the suburbs. Its platforms had become too short for the modern, longer trains being introduced. 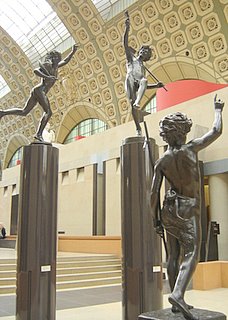 From Station to Museum

After 1939, the station was used for a number of purposes. During WWII, it was a mailing center sending packages to prisoners of war. After the war, it was the station that the returning soldiers passed through on their way home.

It has been used as a location for movies, most notably for the Orson Welles adaptation of the Franz Kafka story, "The Trial".

It also housed a theater company and was used by auctioneers.

The Hotel continued to function until 1973.

The station was considered for use as a museum as early as 1975. In 1977, it was classified as an historical landmark, mainly to keep it from being destroyed and replaced with a hotel complex.

In 1978, it was decided to renovate it and construction began. The Musee d'Orsay was inaugurated and opened to the public on December 1, 1986. 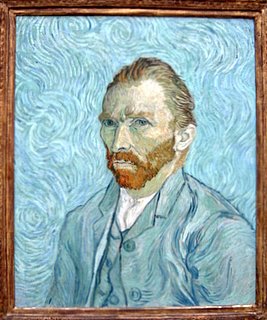 This period includes many different styles of art reflecting the changes in the art scene of that time.

Much of the collection comes from the vaults of the Louvre and from the Musée Jeu de Paume.

Along with painting, sculpture, graphic and decorative arts, the museum has established collections of furniture, architecture and photography.

For further information, visit the Official Website of the Musee d'Orsay.

Return to the Top of Musee d'Orsay Page