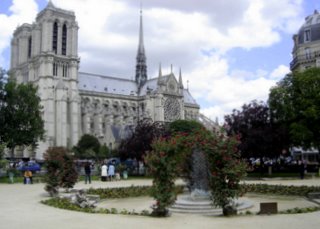 Square Rene Viviani is located on Quai de Montebello, in between rue Galande and rue de Julien le Pauvre. It sits on the Left Bank of the Seine river, just opposite the Cathedral Notre Dame.

Square Rene Viviani is named in honor of René Viviani, the first Minister of Labor of France during 1906-1910. The Square was first open to the public in 1928.

The area occupied by Square René Viviani was originally a Merovingian cemetery. During the 19th century renovations of the Church of St. Julien le Pauvre, which borders this Square to the south, Merovingian tombs were dug up from around the church walls. These are now in the collection of the Musée Carnavalet.

This site also held monastic buildings of the Priory St. Julien in the Middle Ages. Annexes of the Hôtel Dieu had occupied the spot until 1909 when they were brought down. It was then a vacant site until the Square René Viviani was created.

The legend of St. Julien le Pauvre has it that St. Julien mistakenly killed his parents. To atone for this sin, Julien built a hospice near a river where he and his wife cared for the sick, freely lodged poor travelers and ferried them across the river. One of these travelers happened to be Jesus disguised as a leper and forgiveness for Julien's sin was granted.

This St. Julien is a patron saint of travelers and ferrymen.

The church of St. Julien le Pauvre was almost converted into a museum. However, in 1899, the church was re-consecrated and given to the Melkites, or Byzantine rite Catholics of Middle Eastern origin, who are the descendants of the early Christians of Antioch (Syria). It continues to be a church of the Melkites. 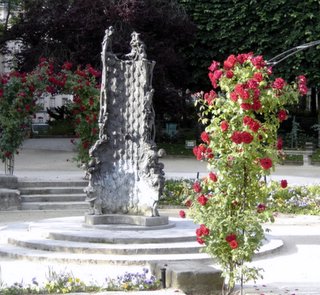 In the middle of the Square Rene Viviani is a tall, triangular shaped bronze fountain in a sunken circular area. It was created by Georges Jeanclos in 1995. A Wallace fountain occupied the spot before that. 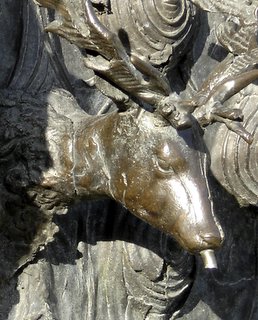 The fountain of Georges Jeanclous represents the legend of St. Julien le Pauvre, the Hospitaller. The fountain is decorated with drops of water and stags.

Julien lived next to a river and the stag is one of his symbols, in that a talking stag is featured in his legend.

This legend was very popular in the Middle Ages as well as having been retold by Gustav Flaubert in his "Les Trois Contes" ("The Three Tales") of 1877. 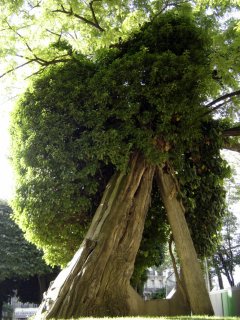 In the south-west corner of Square Rene Viviani is one of the oldest trees in Paris. The date of its planting is disputed. However, the plaque in front of the tree claims that it was planted in 1602. The tree is a "Robinia Pseudoacacia Fabacées". This tree is now supported by concrete columns.

In its prime,the tree was 15 meters tall and 3.5 meters in circumference. Its height was shortened by a shell during World War I.

It is said to have been planted by Parisian botanist Jean Robin (1550-1629) who discoverd this type of tree in Guyana and was the first to propagate it in France. The genus of the tree is named in his honor.

Jean Robin was an herbalist for King Henri III, King Henri IV and for Louis XIII as well as director of the king's apothecary garden.

Between the church and the fountain is a double row of trees providing the deepest shade during the summer months and several benches. Also here in the shade are blocks of carved stone left over from the 19th century renovations of the Notre Dame cathedral by architect Eugène Viollet le Duc.

The Square René Viviani is open every day and closes at 9:30 p.m.