Notre Dame de Paris
The Heart of the City 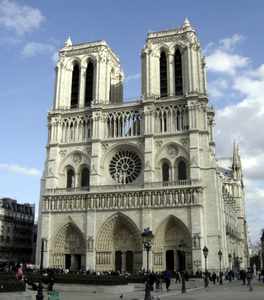 Arrondissement: 4eme
Go Here For Hotels In This Area
Map of the Area

The first church built on the site of Notre Dame was a Roman Temple to Jupiter. Following that was the first Christian church, dedicated to Saint Etienne, Saint Stephen, built during the 5th-6th centuries.

This was destroyed with the several invasions of the Normans. During the 7th century a church dedicated to Notre Dame, Our Lady, was constructed.

On the western end of the square in front of Notre Dame is the entrance to the archaeological treasure of the Crypt of the Notre Dame. Here one can visit the foundations and ruins of these first churches.

Construction of the Notre Dame de Paris began in 1163, during the reign of Louis VII, directed by Maurice de Sully, the bishop of Paris. It was built in what has come to be known as the "gothic" style. The first church built in this style is the basilica of Saint Denis, in the town of St. Denis just north of Paris.

The building of the cathedral of Notre Dame involved several different architects, though none definitively linked by name. One would be Pierre de Montreuil, who was also the probable architect for Sainte Chapelle, completed in 1248. During the later years of construction, Pierre de Chelles and Jean Ravy are also mentioned. 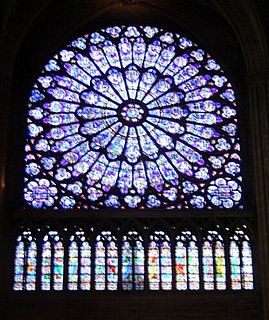 The North Rose Window, with 85% of its glass original, was completed in 1250 and has the oldest glass in the building. It represents the Old Testament.

The South Rose Window, completed in 1260, represents the New Testament. It was last re-worked in 1860 when it was shifted some few degrees to add vertical strength to it.

The West Rose Window, dedicated to the Virgin Mary, was the first Rose Window of the cathedral. Construction of it began in 1220, though wasn't completed until 1270. 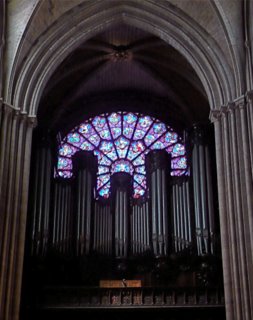 Very little of the original glass remains. The Window is partially obscured by the pipes of the Great Organ, one of the largest organs in the world, installed in 1730.

The towers took 25 years to build and were completed around 1250. The chapels of the ambulatory and the "flying-buttresses" were added during 1296-1330.

Thanks in part to the success of Victor Hugo's novel, "The Hunchback of Notre Dame", a restoration program was initiated in 1845, overseen by architects Jean-Baptiste-Antoine Lassus and Eugene Viollet-le-Duc. The restoration lasted 23 years and included the re-construction of the spire.

In 1911, the law of separation of Church and State was passed; as with all cathedrals, Notre Dame remains state property, but its use is granted to the Roman Catholic Church.

In 1991, a major program of maintenance and restoration was initiated, which was intended to last 10 years, but is still in progress.

Today, the front entrance to the church has been restored and the effect is quite stunning. The detail of the carvings and statuary stand out wonderfully when viewed from the Parvis, the Square, in front of the cathedral.

The exterior eastern side of the cathedral is particularly interesting. From the garden there, the Square Jean XXIII, you can see, in detail, the flying buttresses. 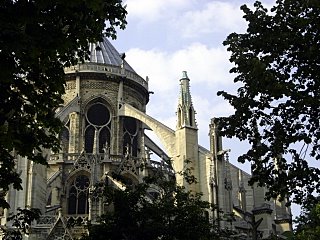 The west front of the cathedral is probably its most notable feature with its two square towers of 69 meters (228 feet).

The South Tower holds the cathedral's famous bell named, "Emmanuel". The bell weighs 13 metric tons (over 28,000 pounds), its clapper alone weighs 500 kilograms. The bell is Notre Dame's oldest, having been recast in 1631.

The Galerie des Chimères connects the two towers and is where the cathedral's legendary, but mis-named, gargoyles (not chimères) can be found; mis-named because these are gargoyles which are the fixtures that stand out horizontally from the building and are actually an integral part of the drainage system.

The other creatures perched on the edges of the towers are the Chimera, mythological beasts that are a combination of a number of animals. There purpose is to keep the evil spirits at bay.

In front of the West Rose Window stands a statue of the Virgin Mary carrying the Baby Jesus.

The Gallery of Kings is a line of statues of the 28 Kings of Judah, which was redesigned by Viollet le Duc to replace the statues destroyed during the French Revolution.

The revolutionaries mistakenly believed these statues represented the French kings and decapitated them. The heads of these statues were discovered in 1977 and are now on display in the Museum of the Middle Ages.

France's "kilometer zero", the reference point for distances measured along the highways starting from Paris, is marked by a plaque set in the square in front of the cathedral. 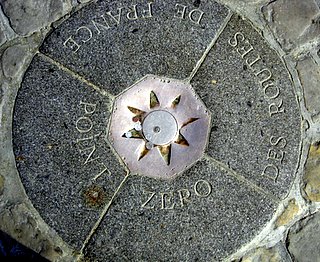 The Towers are open everyday except for January 1, May 1 and December 25. The hours are from 10 a.m.- 5:30 p.m. during the Fall and Winter months and until 6:30 p.m. during the Spring and Summer months. The last entrance is 45 minutes before closing.

Admissions for the Towers are: