The Carnavalet Museum
The Museum of Paris History 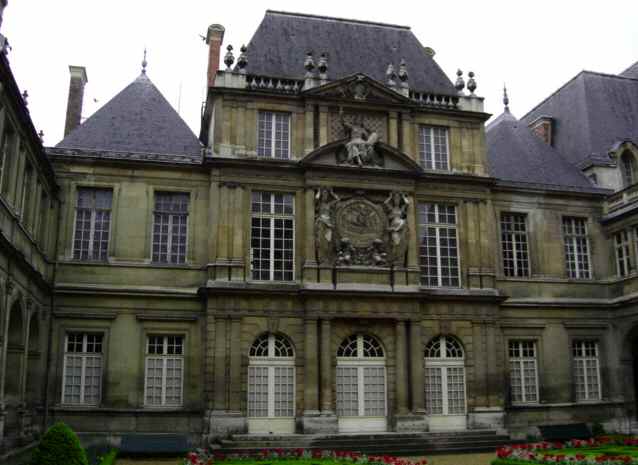 The Carnavalet Museum Hours and Admissions

The Carnavalet Museum occupies a wonderful old palace in the heart of the Marais district. Built in 1548, the palace was once the home of Madame de Sevigné, a 17th century marquise and letter writer whose correspondence has left us a unique and lively glimpse of court life in the 1600s.

The Museum is actually housed in two buildings that are connected by a gallery on the 2nd floor.

The larger of the two buildings is the Hôtel Carnavalet and the smaller, but no less beautiful, is the Hôtel le Peletier de Saint Fargeau.

Entering the courtyard from rue des Francs Bourgeois you are presented with a small, beautifully designed garden with gravel paths.

This is the Court of Flags.

The buildings have some interesting architectural elements, such as a large medallion and statues on the eastern facade. 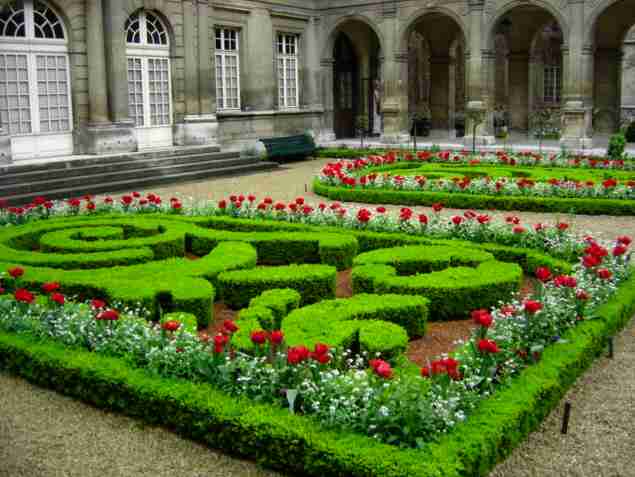 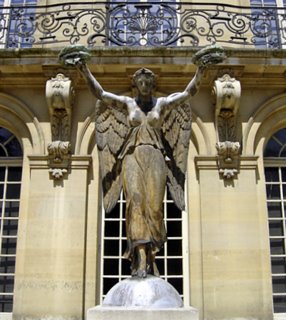 If, however, you enter by the main entrance on rue de Sevigne you are greeted by one of the few statues of royalty to have made it through the Revolution, that of King Louis XIV, created in 1689 by Antoine Coysevoux.

The wall behind the statue is adorned with bas-relief sculptures of Jean Goujon, representing the four seasons and marked with the beginning signs of the zodiac for each season. 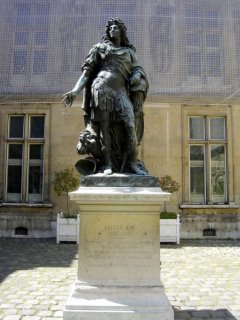 The wall to the left has bas-relief of the four elements and the wall on the right has sculptures representing the four winds. These were done by Gerard Van Obstal.

The Carnavalet Museum is the consummate museum of the history of Paris. The collection contained here illustrates the evolution of the city from pre-historic times to the present day.

The Carnavalet Museum presents Parisian life in a way that is infinitely interesting and charmingly intimate.

The message that comes across as you walk through the rooms of the Carnavalet Museum is that the history of Paris is a story of the lives of millions of famous and nameless individuals down the centuries.

It was during the city planning days of Baron Haussmann and the renovations initiated by Napoleon III that the prehistoric roots of Paris were first uncovered.

The sciences of archeology and paleontology were in their infancy, but the dedicated scientists that were part of Baron Haussmann's staff were meticulous in their work.

In demolishing vast areas of Paris to accomplish the task of city planning, crews uncovered remembrances of things past, pushing the knowledge of habitation on the banks of the Seine back thousands of years.

The collection in the Orangerie of the Carnavalet Museum has human artifacts dating to the old stone age, 500,000 BCE, at a time when humans shared the land with the woolly mammoth and the saber tooth tiger.

In the collection is a boat from Middle Neolithic period, about 4,000 BCE.

The artifacts from this period consist mainly of stone axes, spear points and arrow heads but, from 1800 BCE onwards, bronze and iron artifacts become plentiful attesting to the popularity of this area.

There are coins from 100 BCE and evidence of Celtic origins in the form of burial sites and stone carvings were also uncovered.

There is also a collection of carvings and coins from the Roman period.

Wandering back through the rest of the house is like walking through a time machine. The rooms are furnished and designed so that you can experience the surroundings of those periods in Parisian life.

The particular beauty of this collection are the constant reminders of the common folk. That refrain keeps echoing in the paintings of everyday life, in the collections of street signs and shop signs and in the rooms themselves that, even though furnished in a way that would have been out of reach for most of the populace, still reflects a working class practicality that is often times lost when visiting the mansions and homes of French royalty.

The Carnavalet Museum Admissions and Hours

Admission to the permanent collection is free.

Admission to the temporary exhibitions is 7 euros for adults; 5 euros for those over 60 years of age; 3.50 for those between the ages of 18-26; and free for those under 13 years old.

Return to Top of Carnavalet Museum