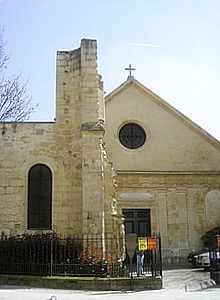 The following synopsis was gleaned from the pages of Ann Snow's website on the Church of Saint Julien le Pauvre. This excellent site details the history and architecture and presents a virtual tour of the church.

The Church of St. Julien le Pauvre was first mentioned in the writings of Gregory of Tours in his "History of the Franks", produced in the 6th century.

This is one of the oldest churches in all of Paris. It is located on rue St. Jacques, bordering the Square Rene Viviani, just opposite the Seine river from the Cathedral of Notre Dame.

Archaeological investigations have shown that the church stands in the midst of an ancient cemetery dating back to Gallo-Roman and Merovingian times.

Though the present structure has stood for over 700 years, the first church here, a basilica, stood near the ancient Roman Road, the present day rue Saint Jacques. There a number of paving stones from that Roman road in the courtyard of the church.

The old Basilica stood until the end of the 9th century. In 886 it was destroyed by Norman invaders; the date traditionally given coincides with the famous Battle of the Petit Chatelet.

The church came under the control of the Benedictine Abbey of Longpont in the year 1120 and at that time a group of 50 monks founded a priory on the site and rebuilt the church in the Gothic style.

During the Middle Ages, the church prospered due in great part to its proximity to the pilgrim route that led to the shrine of Saint James in Spain.

The Priory thrived as a pilgrim center and later as a center of learning until it was dissolved in 1655. The Church of Saint Julien le Pauvre transferred to the charity hospital of Hotel Dieu and was used by the charity as an annex and church up until the French Revolution when all church property was seized by the state.

During the Restoration, the church was given back to Hotel Dieu, but was deconsecrated again in 1877 when the charity hospital was moved to its new location on the Right Bank.

In 1889, the Church of Saint Julien le Pauvre was reconsecrated and assigned to the Melkite Order, a congregation of Eastern Catholics who observe a Byzantine Rite. The Church remains under their auspices to this day.

This ancient church is a historical monument of the City of Paris. 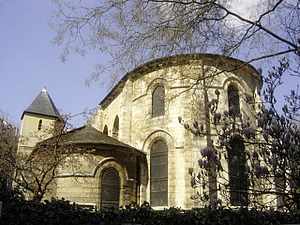 Return to Top of Church of Saint Julien le Pauvre