Montmartre
A Village Above It All

The name "Montmartre" comes from the old name of "Mont des Martyrs", Mountain of the Martyrs, because it was here where the first martyrs of Paris, the bishop St. Denis, the priest Rustique and the arch-deacon Eleuthère (or Rusticus and Eleutherius) were decapitated by the Romans around 250 A.D.

The Romans had built temples to Mercury and Mars on this hill and they didn't take kindly to Christians moving in.

Legend has it that at his decapitation, St. Denis went on to pick up his head, wash it off and carry it 8 kilometers (about 4 miles) to the north to what is now the town of St. Denis before he finally dropped. A shrine was built on the spot which became part of the Abbey of St. Denis built by Dagobert I. This was later replaced by the beautiful Basilica of St. Denis, construction of which began in 1136 and is considered the first gothic cathedral. This basilica became the place of burial of the kings of France. Most of the French kings from Dagobert I (reign 629-639) to Louis XVIII (reign 1814-1824) are buried here.

As is often the case when a religious figure has been executed by the Romans, the hill became a place of pilgrimage, including such pilgrims as St. Germain, St. Clotilde, St. Bernard, St. Joan of Arc, St. Vincent de Paul, St. Thomas Aquinas and also St. Ignatius of Loyala and St. François Xavier who together founded the Society of Jesus, the Jesuits, here in 1534.

In the 12th century, Benedictine monks built a monastery on the hill which later became the powerful Abbey of the Dames of Montmartre and which almost covered the entire hill. Only the Church of St. Pierre, consecrated on April 21, 1147, is left of this Abbey.

In the late 14th century, after King Charles VI had recovered from his first attack of madness and escaped a fire, he made a pilgrimage of thanks to the Martyrium of St. Denis at the Abbey.

In 1599, a fire destroyed most of the Abbey. In 1611, a new Abbey was constructed down the hill from what was left of the original Abbey. On July 11, 1611, a stairway leading to the former crypt was discovered and said to have been sanctified by St. Denis. Marie de Medici and 60,000 other pilgrims came to visit the site.

In the 18th century, a grotto was discovered, engraved with the name of St. Denis who had lived in the caves of this gypsum hill along with his disciples. The news of this discovery greatly increased the numbers of pilgrims to the area.

In 1792, during the Revolution, the nuns were dispersed and the Abbey was destroyed. The last Abbess, Marie Louise de Montmorency-Laval was executed on July 24, 1794.

As you can see, the area has a distinctive history of religious habitation, persecutions and pilgrimage. But, there's more.

The Paris Commune and Sacre Couer

The hill was a rallying point and actually a stronghold for the Communards of 1871, fortified by the 200 cannons used as defense for Paris during the Franco-Prussian war of the previous year. An army was ordered to remove these cannons which, ironically, the Communards used to disperse the army, killing two generals doing it. The President of the New Government, Adolphe Thiers, consequently ordered all government officials and the army to leave Paris for Versailles. This opened the door for the Commune to govern the city.

For the following 10 weeks, the Communards fought the army from Versailles in the streets of Paris. During that time over 20,000 people were killed, 40,000 arrested, 30,000 prosecuted and 13,000 incarcerated or deported.

Now, finally, comes the Basilica of Sacre Coeur, located atop the hill. It was built "to expiate the crimes of the Communards", as well as to commemorate those who lost their lives in the Franco-Prussian War and during the Commune Uprising.

Before the area was annexed into the City of Paris by Napoleon III in 1860, it was predominately a gypsum quarry and vineyards. Even though it was now part of the city which Napoleon III's city engineer, Baron Haussmann, was transforming, surprisingly, he left it alone and it remains fairly the same as it was then, except for the gypsum quarries, now filled in and the vineyards, now built over, all but one, the sole survivor of a grape-growing area since Roman times. 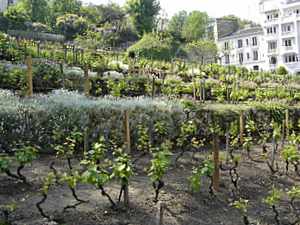 The Benedictine Abbey during its time operated a wine press and sold a white wine, "clairet", and a red wine, "piquette".

All the wine produced is sold at an auction on the first week-end of October, called the Fête des Vendanges, the Harvest Festival, of which all proceeds of the sale go to charities and social services to the 18th arrondissement (district). 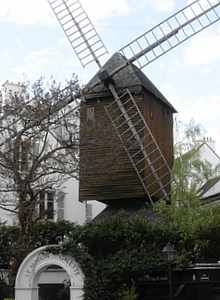 At one time there were 13 windmills scattered around the hill. The first "Le Moulin Vieux", the Old Mill, was built in 1570. The last one to function, "Le Moulin à Poivre", the Pepper Mill, stopped operating in 1878. Only two remain, "Le Blute Fin", and "Le Radet". These two were collectively called "Le Moulin de la Galette", the Pancake Mill, as were the gardens and the farmhouse of the property.

Auguste Renoir memorialized "Le Blute Fin" in his painting, "Bal du Moulin Galette", as it had been transformed into a ball-room, though, it no longer is. "Le Radet" is now a restaurant.

Montmartre has almost the highest elevation in the City of Paris at 130 meters above sea level, setting it apart geographically from the rest of the City. Perhaps that is one reason why this area has a particular history of non-conformists, beginning with St. Denis.

During the end of the 19th century, the village became the enclave of artists and the home of the Impressionists. At the beginning of the 20th Century, Montmartre witnessed the emergence of Cubism, Fauvism and Surrealism. 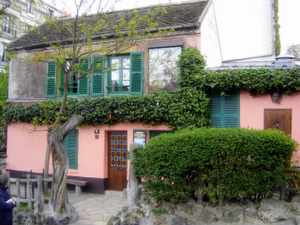 Many of their homes, studios, restaurants and cafés still exist, such as the Cabaret Lapin Agile, the Musée du Montmartre, which was the residence and studio of Auguste Renoir among others, Le Bateau Lavoir, studio of Pablo Picasso and others and, of course, Le Moulin Rouge.

Also found on Montmartre is the Salvador Dali Museum.

Art still thrives in the district as a location for films, a residence for those in the film and theatre industries and as a center for quick-sketch artists in Place du Tertre.

This village is a wonderful neighborhood of Paris. The winding, cobblestone streets, the rich history, the incredible vistas, one of the oldest churches in Paris, the Church of St. Pierre and certainly one of the most beautiful buildings of any kind in Paris, the Basilica of Sacre Coeur, all make Montmartre a unique part of Paris.

For a Private Guided Tour of the area, go to our Montmartre Tour page. 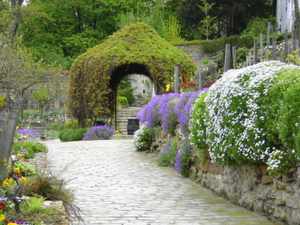 Return to Top of  page.