Musee National Eugene Delacroix
The Last Residence of the Artist 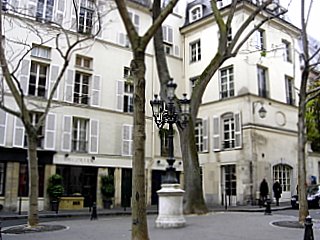 It is located on a small Square which was the former court of honor of the abbey palace built in 1586 by the Cardinal de Bourbon, abbot of Saint Germain des Pres. The palace is a wonderful building that was restored some few years ago.

Delacroix moved here in 1857 mainly to make it easier to work on the frescoes he was painting for the church of Saint Sulpice not far away. These frescoes, which can still be seen in the Church, were his last major works and were completed just before his death in 1863.

The apartment and studio became the Musee National Eugene Delacroix in 1952.

Musee National Eugene Delacroix is open every day except Tuesday and holidays from 9:45 a.m.-5 p.m.

He was born at Saint-Maurice-en-Chalencon, Ardèche, in the Rhône-Alpes Region of France. He was trained by Pierre-Narcisse Guérin in the neoclassical style of Jacques-Louis David, but was strongly influenced by the more colorful and rich style of the Flemish painter Peter Paul Rubens (1577-1640) and fellow French artist Théodore Géricault (1791-1824) whose works marked an introduction to romanticism in art.

Delacroix's developing technique would prove to be an important influence on others. His use of expressive color profoundly shaped the work of the Impressionist movement.

In 1822, his first major painting, The Barque of Dante, was accepted by the Paris Salon and two years later he achieved popular success for his Massacre at Chios.

Delacroix's most influential work came in 1830 with the painting, "Liberty Leading the People". This painting serves to show the difference between the romantic style of painting and the neoclassical style of Jean Auguste Dominique Ingres.

The French government bought the painting but officials deemed its glorification of the idea of liberty as too inflammatory and removed it from public view.

Following the Revolution of 1848 that saw the end of the reign of King Louis Philippe, "Liberty Leading the People" was finally put on display by the newly elected President, Napoleon III. It now hangs in the Louvre Museum.

Delacroix continued to receive government commissions for murals and ceiling paintings in spite of the controversy surrounding "Liberty Leading the People".

Eugene Delacroix also illustrated various works of William Shakespeare, the Scottish writer Sir Walter Scott, and the German writer Johann Wolfgang von Goethe. He is also well known for his Journals, in which he expressed his views on art as well as a variety of topics.

In 1832, he traveled to Spain and North Africa, a trip that would influence the subject matter of a great many of his future paintings.

Throughout his life Delacroix remained the pre-eminent French romantic painter in the tradition of Michelangelo and Rubens.

He painted the famous portrait of the composer Frederic Chopin.

Many large murals of his can be seen in churches around Paris, as well as in the Palais du Luxembourg.

His "Deposition" in Saint Denis du Saint Sacrement in the 3eme arrondissement was finished in 1848.

In the Church of Saint Paul-Saint Louis is his work "The Agony" which displays the artist's mastery of capturing light in canvas.

Eugene Delacroix died in Paris. He is buried in the Père Lachaise Cemetery.

Return to Top of the Musee Nationale Eugene DelacroixPage