Palace of the Luxembourg
Home of the French Senate 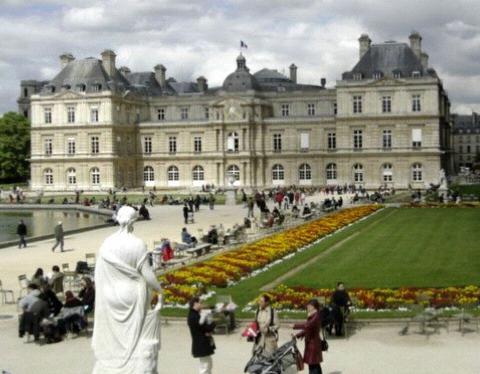 RER: Luxembourg
Arrondissement: 6eme
Go Here For Hotels In This Area
Map of the Area

The site of the Palais du Luxembourg et Jardin, the Luxembourg Palace and Garden, was originally a Roman camp. In 1257, a convent was built here.

The Luxembourg Palace was built between 1615-1627. After Henri IV was assassinated, his widow, Marie de Medici, decided to build herself a luxurious palace in the Luxembourg district of Paris.

She bought the Hôtel Flanco de Luxembourg and its eighteen hectares as well as some neighboring properties to equal twenty hectares.

She then asked architect Salomon de Brosse to build her a palace using her childhood home of Pitti Palaco in Florence as a model. However, Salomon de Brosse, with the help of architects Alphonse de Gisors and Jacques Le Mercier, designed the new palace in a French style, not Italian.

In 1621, Marie de Medici summoned painter Peter Paul Rubens from Antwerp and commissioned him to decorate the Palace with 24 works known as the "Marie de Medici Cycle". These paintings, now in the Louvre, mainly depict her married life to Henri IV.

For the Garden, the Queen had landscape architect Boyceau de la Barnuderie design the flower beds and Thomas Francino design the terraces and fountains.

The Palais du Luxembourg then housed a succession of France's nobility.

In 1792, the Palais du Luxembourg was taken over by Revolutionaries and converted into a prison. Among those imprisoned here was Josephine de Beauharnais and her husband Alexandre de Beauharnais who was executed. Josephine, however, was not executed and returned to the Palace a few years later as Empress with her second husband, Napoleon Bonaparte.

In 1797, Napoleon I installed the Senate in the Palace, for a brief time. The Senate returned to the Palace in 1879, where it is today.

During WWII, the Nazis occupied the Palais and used it as the Luftwaffe headquarters.

The interior of the Palais du Luxembourg contains many paintings and frescoes including those of Eugene Delacroix.

Next to the Palais du Luxembourg is the Musée du Luxembourg, which once housed a permanent collection of 19th century paintings and sculptures. Now, it offers temporary exhibits presented by the Ministry of Culture and the Senate. 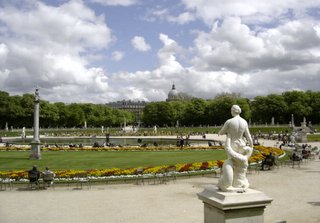 The Jardin du Luxembourg is one of the largest and most beautiful parks in Paris.

There are many sculptures scattered through out the grounds, including the Fountain des Médicis, statues of the Queens of France as well as one of Saint Genèvieve, the patron saint of Paris, Rodin's bust of Stendhal, Sicard's sculpture of George Sands, a miniature Statue of Liberty (a gift from Bartholdi to the City of Paris) and many, many others.

The Garden has a large children's playground with a carousel located nearby.

At the Grand Basin, model sailboats can be rented on Wednesday, Saturday, Sunday and on school holidays from 2 p.m.-4:30 p.m. in winter and until 7 p.m. in summer.

The Théâtre du Luxembourg presents marionette shows for all ages. Performances run on Wednesday, Saturday, Sunday and holidays at 3:30 p.m. and daily during summer with performances at 2:30 p.m., 3:30 p.m. and 4:30 p.m.

Also available in the Garden are Shetland Pony rides for the smaller children.

Along with the 350,000 plants and flowers that are planted each spring, including 150 palm and orange trees, there is a garden of bee-hives. A "keeper of the hives" is there on Wednesdays and often on Saturdays and courses on bee-hive management are offered.

The Luxembourg Garden also has several tennis courts, basketball courts, volleyball courts, pétanque (boules or bocce ball) courts and tables for chess and other board games.