Church of Saint Sulpice
The Gnomon and Eugene Delacroix 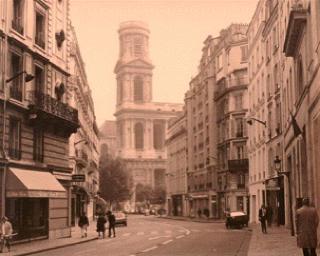 The first chapel on this site dates to the 7th century. In the 13th century, that chapel was torn down and a gothic structure was built in its place which became the center of the first parish Church of Saint Sulpice.

As the parish grew, the church became inadequate for the needs of the local parishioners and in the early 17th century the present church was begun.

The first stone of the Church of Saint Sulpice in its present form was set in 1646 by its architect Christophe Gamard, but because of a long history of financial troubles and historical incidents, the building project was extended over the next century.

Designed and begun by Christophe Gamard, who died the year after the first stone was laid, the work was taken over by Louis La Vau, then architect to Louis XIV, and by Daniel Gittard.

The work was completed by Gilles-Marie Oppenord and the church was consecrated in 1745.

During the French Revolution, the church of Saint Sulpice was pillaged and turned into a "Temple of Victory", but underwent extensive renewal under the French Restoration in the early 19th century.

There are many fine works of art inside the church which show the evolution in art over the centuries.

In 1732, Francois Lemoyne painted the cupola in honor of the Assumption of the Virgin.

During the 1761 restoration of the chapel of the Virgin, Jean Baptiste Pigalle created two reliefs "Jean Jacques Olier and the Parishioners" and the "Virgin and Child".

The choir holds two sculptures from 1740 by d'Edme Bouchardon, "The Virgin of Sorrows" and "Christ at the Column".

Michel-ange Slodtz created the tomb of Languet Gergy in 1757. It is a mixture of marbles and bronze which portray the struggle between death and immortality.

He also created a bas relief in 1750 for the Chapel of the Virgin which tells of Jesus' first miracle at the wedding in Cana.

In the chapel of the Holy Angels are two works by Eugene Delacroix. One depicts Jacob fighting with the angel, whereafter the angel wounded him in the leg and he was given the name "Israel" by Yahweh.

The other depicts a scene from the Second Book of Maccabees which tells of Heliodore, envoy to the king of Syria, riding his horse into the Temple of Jerusalem.

The last work by Eugene Delacroix depicts the Angel Michael slaying the Dragon.

The crypt of the church of Saint Sulpice preserves a number of traces of the foundation of the early Gothic structure.

One of the most interesting features of the Church of Saint Sulpice is the Gnomon and the brass marker line in the floor of the nave and the alignment and placement which allows for a shaft of light to pass through a window and across the floor to the gnomon on the days of the equinoxes and solstices.

This brass marker line is not the "Zero Meridian" line as put forth in a popular work of fictionwhich is not the place to get your facts on astronomy, theology or even driving directions around Paris.

The gnomon is tool designed in this case to indicate the exact date of Easter. In the Christian liturgical calendar, the Feast of Easter, which commemorates Jesus' resurrection, is a movable feast and its date is tied to the season of Spring.

Ever since 325 A.D., the date for Easter has been set as the first Sunday following the Paschal Full Moon.

In the northern hemisphere, this has traditionally come to mean that Easter is the first Sunday after the first full moon after the Spring (Vernal) Equinox.

For an in-depth discussion of why this is an inaccurate definition for Easter, you can check the information at this interesting website.

For our purposes, we will use the practical definition that was used in the 18th century at the time of the construction of the gnomon.

By calculating Easter from the Spring equinox, which is technically an astronomical moment, it was necessary to have a way to determine just when that moment arrives.

In 1727, Henri de Sully devised a way of doing just that. He did so by drawing a north/south line on the floor of the church of Saint Sulpice, then installing a lens in the window of the south transept approximately 80 feet off the ground. A beam of light enters the lens and cuts across the line on the floor. The light on the solstices would determine the two ends of the line and the light from the equinoxes would cut the line in the center.

Because the floor of the church of Saint Sulpice was not wide enough to accommodate the shadow of the Winter Solstice, a vertical pillar, called a gnomon, was erected in the north transept. The line was marked by an inlaid brass strip.

This brass strip is not the old "Zero Meridian" of Paris, which lies some 100 meters to the west.

The "Zero Meridian" of Paris was determined in 1667 and by design the Observatory of Pariswas built on it. This meridian was then calculated more exactly by astronomer François Arago in 1800.

In 1995, to honor François Arago, who was the director of the Observatory of Paris from 1834-1853, the Netherland artist Jean Dibbets marked out the north-south meridian line that runs through Paris, the Zero Meridian, with 135 bronze medallions of 12 cm in diameter.

If you were to follow the Arago medallions in search of the Church Saint Sulpice or the Inverted Pyramid of the Louvre Museum, you would miss them both by 100 meters.

Return to Top of Church of Saint SulpiceReturn to Paris Churches