Parc Montsouris
Sculptures, a Lake, a Weather Station and the RER 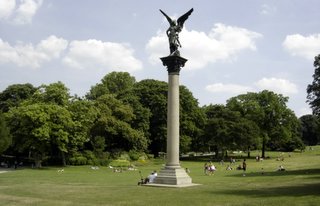 Arrondissement: 14eme
Go Here For Hotels In This Area
Map of the Area

The Parc Montsouris covers 15 hectares and is built on top of a labyrinth of former gypsum quarries from the Montrouge mines.

These quarries were made into catacombs at the end of the 18th century and filled with 5-6 million bones from discontinued cemeteries of Paris.

The name of the park is derived from the old name of the area "Moquesouris" translated as "mock mouse". It was a place of mills which generally attract mice. Later, these mills were abandoned.

The area is also the place of the 13th century legend of the giant Isoire being slain by Guillaume d'Aquitaines.

In spite of the park being the place of a slain giant, abandoned mills, mice and millions of bones, it is an absolutely lovely park. 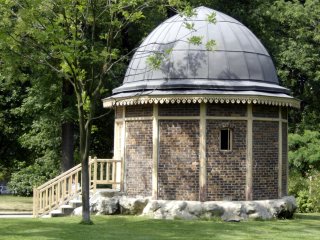 Napoleon III and Baron Haussmann planned to have a major park situated at each of the four cardinal points in Paris: Bois de Boulogne on the west, Bois de Vincennes on the east, Parc des Buttes-Chaumont on the north and Parc Montsouris on the south. 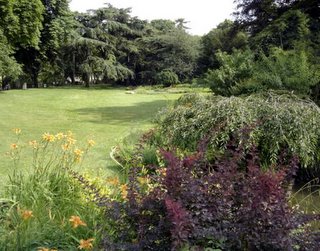 Engineer Jean Charles Adolphe Alphand was given the job of designing the park. Alphand was kept very busy by Napoleon III and Baron Haussmann, designing such parks as the ones mentioned above, as well as Parc Monceau. 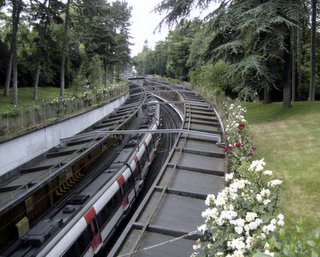 Work began on the Parc Montsouris in 1865. The main technical difficulty was that two rail lines ran through the area, the Sceaux line, running north-south, and the Petit-Ceinture line going east-west. The Sceaux line, also known as the Paris-St.Germain-en-Laye line was the first railway in France. It was changed to run underground through Parc Montsouris and is now the RER line B, which continues to run through the Parc, dividing it in two. The Petit-Ceinture line was dismantled.

Another complication of the park's development was the Franco-Prussian War of 1870-1871. It was during this war, on September 2, at the Battle of Sedan where Napoleon III was captured. He was then deposed in Paris two days later by his political opponents with a parliamentary coup. He died in exile in England on January 9, 1873. 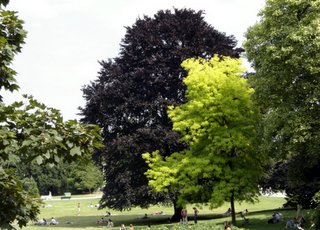 Alphand created an English Garden of three major lawns and 1,400 trees. There are many trees which are now over 100 years old including a Virginian Poplar, an American Sequoia, a Lebanese Cedar and Serbian Elms. Throughout the park many of the trees are labeled designating the type and variety of tree that it is. There are such exotics as gingko biloba and kaki.

A main feature of the park is the Central Lake of nearly one hectare in size. 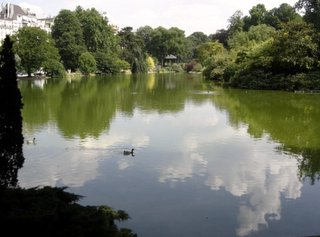 Unfortunately, on the park's day of inauguration, in front of crowds of people, the lake mysteriously emptied. Tragically, the engineer responsible for the lake later killed himself.

Within the park is a meteorological observatory which has been collecting and evaluating climatic statistics of Paris since 1947.

Since 1872, a weather station had been housed in a reproduction of the Bardo Palace of the Bay of Tunisia. This reproduction was first installed on the Champ de Mars for the Universal Exposition of 1867, built by Baron Jules de Lesseps.

After the Exposition, the City bought it from the Baron for 150,000 francs and installed it at Parc Montsouris. As well as being a weather station, a naval astronomy department was developed in 1876 and, in 1893, an air pollution center was added. A new weather station was built near the Bardo Palace which, since 1872, has maintained Parc Montsouris as the oldest continual weather observation post in Paris.

This reproduction of the Bardo Palace burned to the ground in 1991. 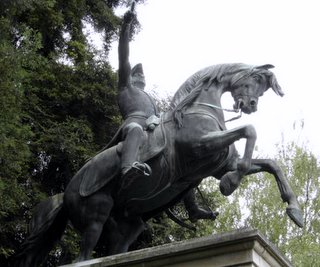 There are many sculptures of bronze and of stone in the Parc Montsouris. There is a monument to General Jose de San Martin (1778-1850), the liberator of Argentina, Chile and Peru, created by Van Peborgh; there is a sculpture called "Pureté" (Purity), by Costas Valsamis; the "Premier Frisson" (First Shiver), by René Baucour; a statue of Thomas Paine by Borglum; 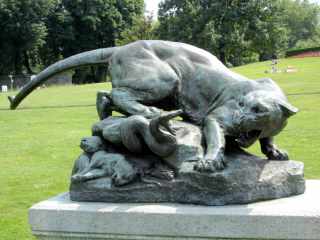 "La Mort du Lion" (The Death of the Lion), by Desca; "Drame au Désert" (Drama of the Desert), by Gardet; "Les Carriers ou Accident de la Mine" (The Quarry or Accident of the Mine), by Henri Bouchard; "Les Naufragés d'Etex", (The Castaways of Etex) by Singery and "Monument a la Mission du Colonel Flatters", by Singery.

Also in the park is the "Mire de la Observatoire". This is a 5 meter tall stone obelisk dated 1806, created by Vaudoyer and placed during the rule of Napoleon I, which was inscribed on the the obelisk. However, the name of Napoleon has been removed.

A music bandstand offers free concerts from May-September on week-ends. Swing, jazz and big bands play as well as choirs and accordion orchestras. 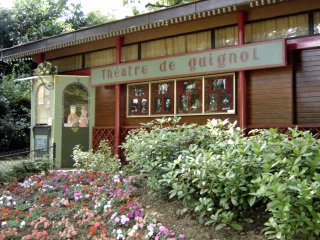 There are several playgrounds for children ranging from sand-boxes and swings to adventure playgrounds plus a couple of carousels.

There is also a half-court basket-ball court in the park.

There is a snack stand and a restaurant which was built in 1898. This restaurant has received such diners as Trotski and Lenin (who lived in the neighborhood) and Sartre and Beauvoir. 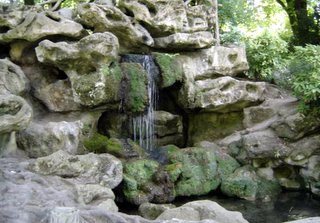 The island waterfall and grotto in the lake is home to a wide variety of birds.

Wheel-chairs are available for borrowing at the Parc.

Return to Top of Parc Montsouris