Parc Monceau
Possibly the Most Beautiful Park in Paris 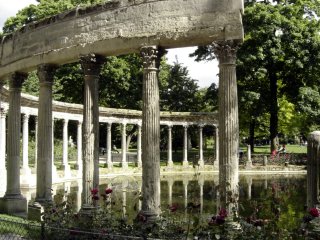 Parc Monceau had its beginning in 1769 when Louis Philippe, the duke of Chartres, who was also the cousin of Louis XVI and the father of King Louis-Philippe I and who would later become the Duc d'Orléans and be known as Philippe-Egalité, purchased a hectare of land on Boulevard de Courcelles.

At this time he had architect Louis-Marie Colignon build a pavillion in the middle of a French-styled garden.

During 1773-1778, he acquired twelve more surrounding hectares. He built on this property, with the designing help of painter Carmontelle, a windmill, a minaret, a pyramid, a Chinese pagoda, a Roman temple, a waterfall and the "Naumachie" which is a pond half-encircled by broken Corinthian columns.

The area was called "the folly of Chartres" by the neighbors. Philippe Egalité was later guillotined during the French Revolution. 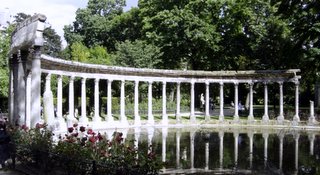 "Toll walls" were built around Paris in 1787, called the "farmers general enclosure" and it bordered this garden, although a ditch was built instead of a wall so that the Duc's view would not be spoiled. The ditch corresponds with what is now Boulevard de Courcelles. 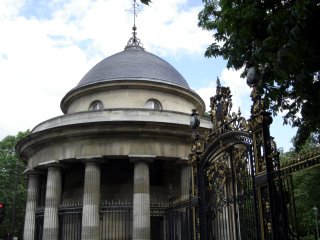 Instead of the usual observation post for the toll walls, a beautiful rotunda designed by Claude Nicola Ledoux was built bordering the Duc's property. This rotunda on Boulevard de Courcelles is one of the last remnants of this enclosure.

In 1793, the now Duc d'Orléans bought more of the surrounding properties and landscape architect Thomas Blaikie transformed the garden with trees and lawns into an English-styled garden. This was one of the first landscaped parks in Paris and it become a place of festivities.

On October 22, 1797, Andre Jacques Garnerin made the first parachute jump in history by leaping from a hot-air balloon 1,000 meters up and landing in the garden in front of a crowd of people. 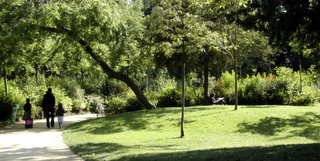 In 1860, the garden was bought by the City of Paris. Baron Haussmann and his engineer, Jean Charles Alphand and horticulturalist Barilles Deschamps, designed it into the park that it is today. Parc Monceau was inaugurated by Napoleon III on August 13, 1861. Since then, statues have been added. 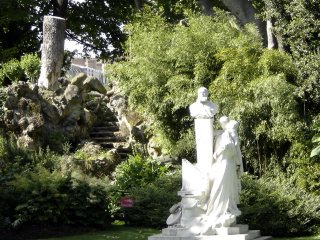 Parc Monceau is not one of the larger parks of Paris, but, it is beautiful and one of the most charming parks in Paris. The many shaded walks wind freely under large trees and past broken Roman columns, parts of ancient ruins, archways, waterways, boulders, a grotto, a cave and abundantly planted flower beds. There is a natural, overgrown sense of plant-life here. 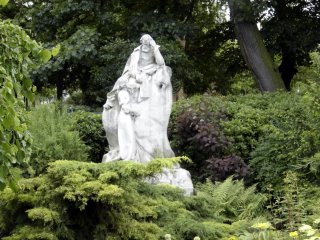 There are many statues in the park including one of Guy de Maupassant by architect Deglane and sculptor Verlet, Ambroise Thomas by Alexandre Falguière, Charles Gounod by Antonin Mercié and one of Edouard Pailleron by Léopold Bernstamm. In 1906, a monument to Frederic Chopin sculpted by Jacques Froment Thomas was presented to the park. 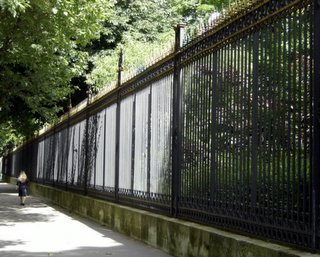 Parc Monceau is enclosed with a large fence. The entrances to the park are guarded by gold-tipped wrought-iron gates designed by Davioud. 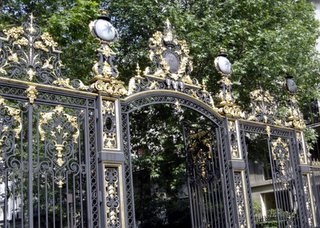 There are children's playgrounds here, swings and a small carousel.

There is a concessions stand that sells sandwiches, salads, crêpes and cold and hot drinks, ice cream, popcorn, cotton candy and candied apples. The stand is also a small toy store selling plastic buckets and shovels, balls and many more toys. 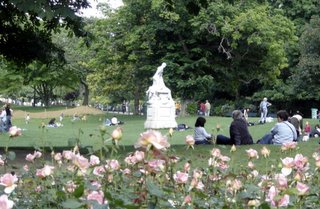 Return to Top of Parc Monceau