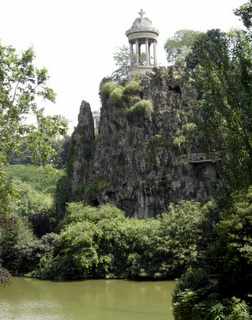 The name of Parc des Buttes Chaumont comes from the contraction of two words: "chauve" (bald) and "mont" (mountain), as the area had the reputation of being a place where nothing would grow due to the heavy concentration of clay in the soil.

The area was first known as Chaumont at the end of the 9th century.

In 885, it was the place of the Battle of Montfaucon when Count Eudes and the Parisians fought back invading Normans.

In the 13th century, it was the site of the Montfacon gallows and was for the next 300 years, until the French Revolution.

In the 15th century, one of the condemned to the gallows, Francois Villon, wrote the "Ballade des Pendus", ("Ballad of the Hanged"). Charles d'Orléans read it and was so moved by it that he granted Villon his freedom.

On March 29-30, 1814, the national guard and the marine artillery fought invading Prussians here before surrendering.

The area of Parc des Buttes Chaumont had also been a gypsum quarry for years and the land was pocked with open pits.

During the French Restoration, the area became the dumping ground for the garbage of the surrounding neighborhoods.

In 1851, nearby rue Crimée was opened and railroad lines were built which effectively ruined the mining operations for the next ten years.

In 1860, Napoleon III annexed the communities of Bellville and La Villette into the City. Wishing to improve the impoverished area with a park, the City bought the quarries in 1862.

Under the direction of Jean Charles Adolphe Alphand, the Director of Public Ways and Promenades of Paris, work on the park began in 1864 and wasn't completed until 1867.

Alphand was also the principal engineer for other parks built at this time such as Parc Montsouris and Parc Monceau. 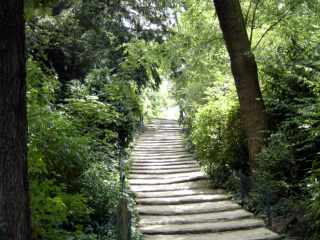 Parc des Buttes Chaumont was inaugurated on April 1st by Napoleon III during the Universal Exposition of 1867. It was instantly seen as a complete success and Alphand was given the distinction of "Artist Engineer". 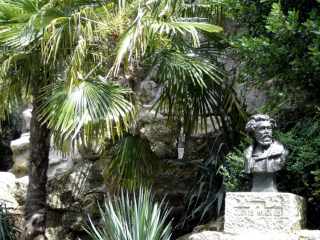 Among those involved in the creation of Parc des Buttes Chaumont, along with Alphand and Baron Haussmann, was architect Gabriel Davioud, landscape designer Barillet-Deschamps, engineers Darcel and Belgrand and Gustave Alexander Eiffel.

Parc des Buttes Chaumont is an exquisite example of what can be done to rehabilitate mis-used land.

A light railway was constructed to facilitate the removal of the refuse of the area as well as transporting all the materials for developing the park. 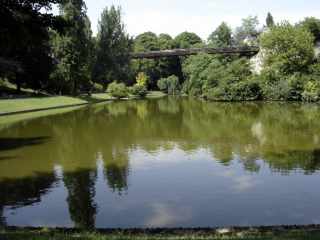 A lake of 2 hectares (5 acres) was dug, surrounding a 35 meter high rocky peak. On top of this peak, Gabriel Davioud built the "Temple of Sibylle", inspired by that of Tivoli. It evokes a sense of mythology. It is the quintessential example of romanticism in landscape architecture. 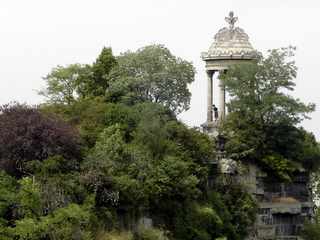 The "Temple of Sybille" was accessed by two bridges. The suspension bridge of 63.86 meters in length and 8 meters above ground built by Gustave Eiffel is no longer used. 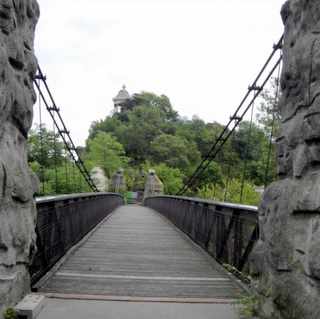 The other bridge is 30 meters above ground, an arched stone and mortar bridge named the "Bridge of Suicides". This is now the only access to the Temple. 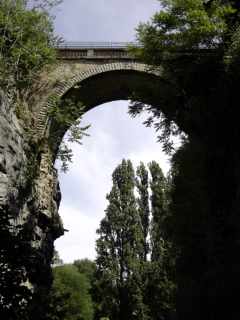 One of two man-made streams which supply the lake with water from the Villette basin cascades in a 32 meter waterfall, falling into a large cave of 20 meters in height and decorated with artificial stalactites.

The Parc des Buttes Chaumont is the second largest park in Paris, after Parc de la Villette and not including the Bois de Boulogne or the Bois de Vincennes, both of which are technically "bois" and not "parcs". It covers 24 hectares (61 acres) with over 5 kilometers (3 miles) of walkways which wander up and around the rolling landscape, offering surprising views of the expansive lawns of the park. 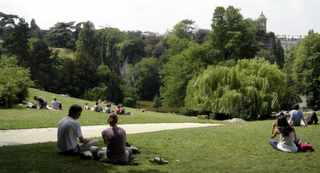 There is also an abundant fish population of gudgeon, roach, tench and pike.

Fishing permits are available on Saturdays from 10 a.m.-11:45 a.m. at the Maison du Combattant et des Associations at 19-20 rue Deouard Pailleron in the 19th arrondissement.

A boat rental is available on the lake; horse and donkey rides are offered in the park; there are snack booths and a café with and an outdoor terrace; there are several playgrounds for children, swings, a roller rink and two marionette theatres.

Parc des Buttes Chaumont opens at 7 a.m. year-round. It closes at 9 p.m. during November-March and at 11 p.m. during April-October. 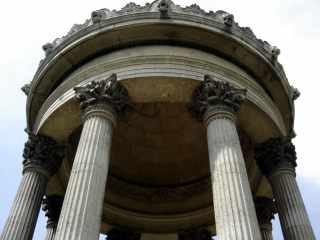