Place Vendome
The Showcase of Opulence 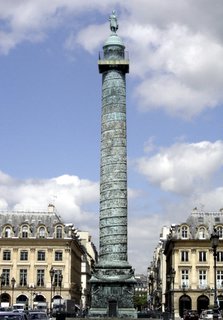 The octagonal Place Vendome, designed by Jules Hardouin Mansart, the architect of the Château Versailles, was built between 1686-1699.

The Place gets it name from the Hotel de Vendôme, the residence of César de Bourbon, the Duc of Vendome, son of Henri IV.

This hotel was removed by Mansart to create the space for the Place.

Originally, it was named Place des Conquêtes. When a large equestrian statue of Louis XIV, created by sculptor Girardon, was set in the center of the Place, in 1720, the name was changed to Place Louis le Grand.

This statue, however, was destroyed on August 12, 1792, by revolutionaries who considered it a symbol of royal power.

The Place then took on the name Place des Piques for seven years. In 1799, it became known as Place Vendome.

Financiers and investors installed themselves in the buildings of the Place. By the 19th century, the Place had become a showcase of luxury and prestige which it continues to be.

Today, the Ministry of Justice is located at Place Vendome, as well as banks, investment houses, the Hôtel Ritz, Cartier and other high-end hotels and jewelers. 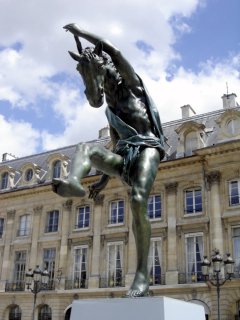 The 44 meter column standing in the center of the Place was designed by Denon, Gondouin and Lepére, constructed between 1806 and 1810 and commissioned by Napoleon to honor the soldiers at the Battle of Austerlitz, and himself. It is modeled after Trajan's Column in Rome, as is the Colonne de Juillet, the July Column, which stands in the middle of Place de la Bastille. 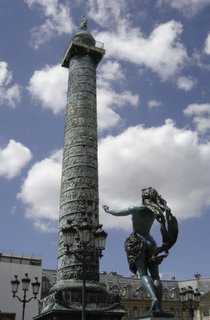 The core is made of stone and the bronze which covers it comes from the melting down of anywhere between 133 to 1250 Austrian and Russian cannons (depending on who you read) confiscated from the battle of Austerlitz (1805).

The spiral sculptures in bas-relief were created by Bergeret and depict various heroes and battle scenes from Napoleon's victories between 1805 and 1807.

Originally, a statue of Napoleon, wearing a Roman toga and sculpted by Antoine-Denis Chaudet, was placed on top. 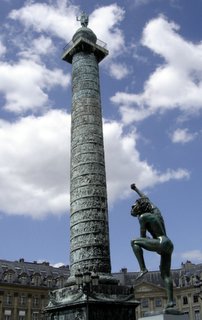 Louis XVIII topped the column with a fleur-de-lys, which was, in its turn, removed by Louis Philippe for a statue of Napoleon, in military uniform. This statue was removed and placed in the Hotel des Invalides where it can be seen looking out across the Cour d'Honneur.

During the Commune in 1871, the column was toppled, but not destroyed.

In 1874, the column was placed again in the middle of Place Vendôme. The statue on it now is a copy of the original which has Napoleon looking like a Caesar.

There is a staircase inside the column which leads to the top, but which is not available to the public.

Return to the Top Place Vendome