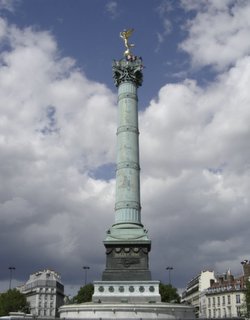 In the center of Place de la Bastille is the Colonne de Juillet, the July Column, a steel and bronze column standing 52 meters high and weighing 170 tons.

The architects Alavoine and Viollet-le-Duc designed it in the likeness of the Trajan Tower in Rome, as was theColonne Vendôme. It was inaugurated in 1840.

The spot had previously been occupied by a 14.6 meter tall and 16.2 meter wide wood and plaster model of an elephant. Napoleon had intended to replace this elephant with one of bronze, made from the melting of guns and cannons taken from the Spanish, and making it a fountain with water spurting from its trunk. However, the Empire collapsed before this could be realized. 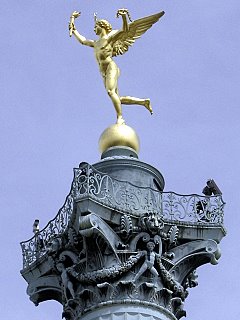 While the elephant stood, it served as a refuge for street urchins, such as Gavroche in Victor Hugo's "Les Miserables". It was also the home of hordes of rats which infested the neighborhood when the elephant was brought down.

The top of the Colonne de Juillet is adorned by a gilded statue called the "Genie of Liberty". It is the work of Durmont. It has a star on its forehead and is carrying a torch in one hand and in the other a broken shackles chain.

The Colonne de Juillet commemorates the July Revolution of 1830, three days of battle called "Les Trois Glorieuses" which resulted in the overthrow of Charles X and the installation of Louis Phillipe.

Funeral vaults were built into the foundation and the 504 people who died in this revolution were interred there (as well as a couple of Egyptian mummies which were decomposing in the Louvre). Later, these remains were moved and interred in the Garden of the National Library. 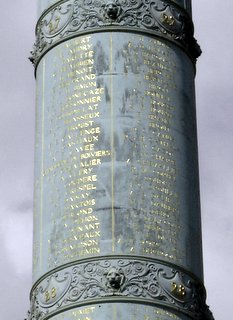 The names of the 504 martyrs are inscribed on the column. In 1848, the 196 victims of the 1848 February Revolution were buried along with those who died in the 1830 uprising, in the National Library garden.

On the northern and southern sides of the base are inscribed the dates of the July Revolution " 27 28 29 Juillet 1830".

On another side is written, "À la gloire des citoyens français qui s'armèrent et combattirent pour la défense des libertés publiques dans les mémorables journées des 27, 28, 29 juillet 1830" ("To the glory of the French citizens who armed themselves and fought for the defense of public liberties in the memorable days of 27, 28, 29 July 1830").

On the other side of the base is written "The Law of December 3, 1830" and "The Law of March 9, 1833". These two laws state that a monument will be erected in the Place de la Bastille commemorating the events of July.

Inside the Colonne de Juillet are 238 steps which allowed access to the top of the column. This spiral stairway is, unfortunately, no longer available to the public. 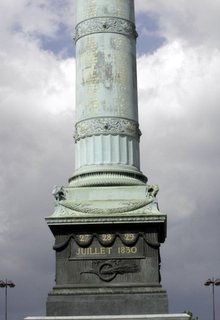 Return to the Top of The Colonne de Juillet