Place des Vosges
Walking Under Vaulted Arcades of the 1600s 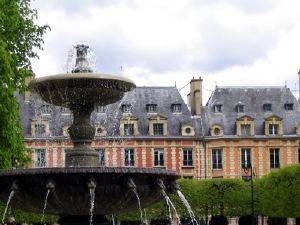 The Place des Vosges is the oldest, and some say the most beautiful, square in Paris.

In 1559, King Henri II was wounded while participating in a jousting tournament there and soon died from the injury. His widow, Catherine de Medici, then had the Hotel des Tournelles and its gardens destroyed.

Place des Vosges, originally named Place Royale, was built by Henri IV during 1605-1612 and is a true square (140 meters x 140 meters). In that Henri IV was assassinated in 1610, the Place was completed during the reign of his son, Louis XIII, though he was only 8 years old at the time he took the throne.

Place Royale was the first program of royal city planning.

During his reign, King Henri IV undertook several building projects for Paris. Among his other works were additions to the Palais du Louvre, the construction of Pont Neuf (New Bridge), the Hôpital Saint Louis and the Place Dauphin.

Place Royale became the prototype of residential squares for other European cities. 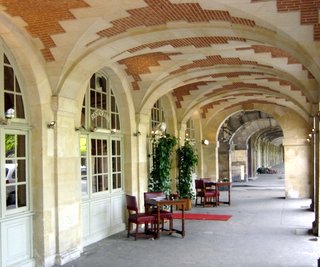 Though named Place Royale, no royalty actually resided there. Cardinal Richelieu, however, was a short-term resident before he became Cardinal. Possibly its most famous resident would be author Victor Hugo, who lived at #6 from 1832-1848, which is now the free museum Maison de Victor Hugo.

An equestrian bronze of Louis XIII was erected in the center of the Place by his First Minister, Cardinal Richelieu. This statue, however, was melted down during the Revolution. It was replaced in 1818 with the present version standing there today.

The Place was renamed in 1800 when the department of the Vosges became the first to pay national taxes to Napoleon.

Today it is a very popular and festive place for enjoying the air of Old Paris.

Place des Vosges is included in our Private Guided Walking Tour The Marais.