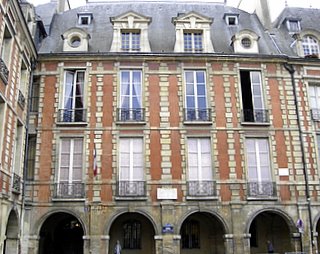 The Maison de Victor Hugo, the Home of Victor Hugo, is located under the arcades of Place des Vosges, in the south-east corner of the Place.

This is a City of Paris Museum and admission is free to the permanent exhibits.

Among the exhibits are original manuscripts and first edition publications, many of Hugo's drawings, paintings and sculptures of Hugo, posters and paintings of theatrical performances and several rooms of his furnishings including a writing table.

Victor Hugo (February 26, 1802  May 22, 1885) was a French author and the most important of the Romantic authors in the French language. His major works include the novels, "Notre Dame de Paris" (known in English as, "The Hunchback of Notre Dame"), "Les Misérables" and a large body of poetry.

He was born in Besançon in the region of Franche-Comté. He lived in imposed and then self-exile during the reign of Napoleon III - in Jersey 1852-1855 and in Guernsey from 1855 until his return to France in 1870.

Although Hugo is better known to the English-speaking world as a novelist, he first became known in France as a poet.

The popularity of his novel, "Notre Dame de Paris", was a considerable factor in reviving public interest in the Cathedral of Notre Dame and its subsequent restoration during the mid-1800s.

Hugo died in Paris on May 22, 1885. His death, and the national mourning which followed, inspired the French government to make the Panthéon in Paris a place of homage of the great men (and Madam Marie Curie) of France. He is buried in its necropolis.