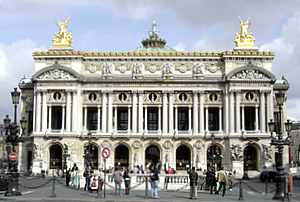 The Opera Garnier is a grand landmark at the northern end of the Avenue de l'Opéra. It is regarded as one of the architectural masterpieces of its time.

Built in the Neo-Baroque style, it is the thirteenth theatre to house the Paris Opera since it was founded by Louis XIV in 1669.

It was called the Paris Opéra, but since the building of the Opéra Bastille in 1989, it is referred to as the Opera Garnier.

Also known as the Palais Garnier, it was part of the reconstruction of the city by Napoleon III and his engineer, Baron Haussmann.

Following a competition for the design of the Opera, an unknown 35-year-old architect was selected, Charles Garnier (1825-1898). He would go on to also build the Opéra Garnier de Monte-Carlo in Monaco. 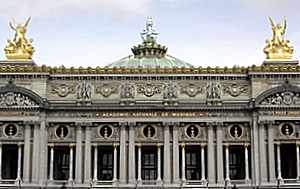 Construction began in 1857 though interrupted by the Franco-Prussian War, the fall of the Second Empire and the Paris Commune Uprising.

Another problem was the discovery of an underground lake beneath the construction site.

This required the developing of an underground reservoir beneath the building. This incident was later to become the inspiration for the famous "The Phantom of the Opera".

It was completed in 1874 and the Palais Garnier was formally inaugurated on January 15, 1875. 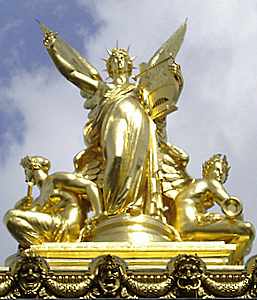 It is an ornate building and the style is monumental, opulently decorated with elaborate multi-colored marble friezes, columns, and lavish statuary. The interior is rich with velvet, gold leaf, cherubs and nymphs. The auditorium's central chandelier weighs over six tons. The ceiling was painted in 1964 by Marc Chagall.

Tours of the Opera Garnier 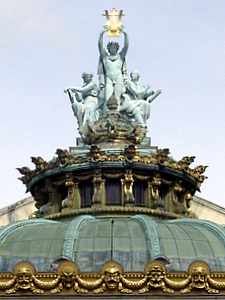 Return to Top of Opera Garnier