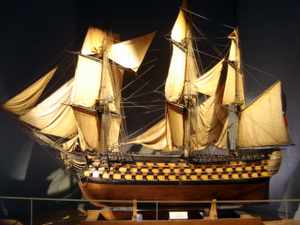 The Musee de la Marine, the Maritime Museum, is devoted to everything seafaring. It is the oldest museum of its kind in the world. It is a museum of art and technology, history and society.

It specializes in the maritime history of France and traces its progression through the centuries with permanent and temporary exhibits.

The Paris Maritime Museum explores the innovations in naval construction, the development of pleasure boating and off-shore racing and the technical progress in marine research and of defense.

The idea for a museum of this kind began in 1747 with the royal collection of model ships but wasn't finally realized as a museum exhibit until after the Revolution with the creation of the "Central Museum of Arts".

A decree on October 31, 1678, required that instructional models of ships be made. At the time, no plans were drawn for the construction of ships, models were the blueprints.

These models soon became sought after by nobles as they were actually masterpieces of construction.

During the 18th century, the most important collections of these models were those of Duhamel du Monceau and Bonnier de la Mosson and the duc of Orleans.

Henri Louis Duhamel was named Inspector General of the Navy in 1739. In 1741, he created the Naval School of Engineering and Construction. In 1748, Duhamel offered to King Louis XV his collection of 20 years of model ships and other maritime artifacts to be displayed in the Louvre.

On August, 3, 1801, this collection of 132 objects was moved to the newly inaugurated Naval Gallery at the Ministry of the Navy, located on the Place de la Concorde.

On December 27, 1827, Charles X decided to create a Maritime Museum to be called the Musée Dauphin.

In 1828, Pierre Zédé, the Director of Ports, traveled to Brest, Toulon, Cherbourg, Lorient and Rochefort to select models of all kinds as well as equipment and tools worthy of exhibiting in a museum. After the short Revolution of July, 1830, the name of the museum was changed to the Musée de Marine, the Naval or Maritime Museum. 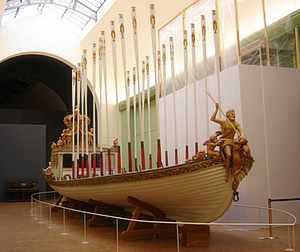 The Musee de la Marine holds the most important collection in the world of model ships, gunboats and artifacts beginning from the 17th century.

The collection was enriched with models from the 19th century of the last of the great sailing ships, such as the "Valmy", and with the innovations of the great steam ships.

Models of merchant ships, fishing boats and pleasure crafts of over three centuries are exhibited.

The permanent collection of the Musee de la Marine is presented in two galleries of 190 meters in length each.

The Gallery Under the Glass Roof traces the history of French Maritime from the 17th century to the end of the great sailing ships.

The Lower Gallery is devoted to the history of the technical aspects of seafaring, the instruments of navigation and maps, the construction of ships during the 17th and 18th centuries, the development of the steam ships and the nuclear powered warships of today.

A model ship building studio is also part of the Musee de la Marine. Its main purpose is the restoration of the models in the collection of the museum.

To conserve the historical value of the models only original materials are used. The wood is generally ebony or fruit-wood with the masts being made from Oregon pine. The only material not of original use is in the rigging where cotton is used rather than the original hemp.

Visitors can watch model-makers and restorers at work.

The museum is open everyday, except Tuesday and holidays, from 10 a.m.-6 p.m. 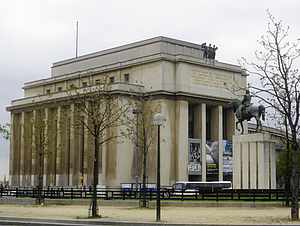