Madeleine
To The Glory Of France 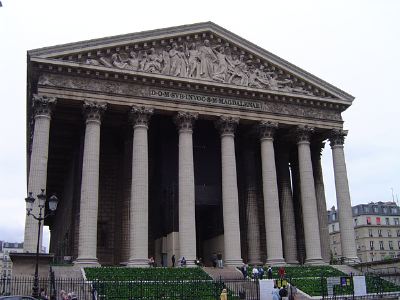 The building of a church on this site was plagued with false starts and took 79 years to finally realize, from 1763-1842.

The first design, commissioned in 1757 by Louis XV, was by Pierre Constant d'Ivry, which he based on Mansart's Late Baroque church of Les Invalides.

The first stone was laid by King Louis XV himself on August 3, 1763.

In 1777, d'Ivry passed away. The project was taken up by Guillaume-Martin Couture. His based his design on the Pantheon in Rome. The beginnings of d'Ivry's construction were cleared away.

By the start of the Revolution only the foundations had been finished. Work continued slowly, however, the function of this building remained undecided.

On December 30, 1791, the National Assembly, the Assemblée Nationale, ordered the work to be discontinued.

In 1806, Napoleon commissioned Pierre-Alexandre Barthélémy Vignon (1763-1828) to build on the site a "Temple de la Gloire de la Grande Armée", a Temple to the Glory of the Great Army. Vignon based his design on the Maison Carrée at Nîmes.

What was standing of Couture's structure was removed and construction of the Vignon's Temple began.

Soon after, however, Napoleon fell from power and the incompleted building was once more without a purpose. King Louis XVIII declared that it would be used as a church. In 1828, Vignon died leaving the building unfinished. Jacques-Marie Huvé took over the project and completed the structure in 1842.

La Madeleine was finally consecrated as a church on October 9, 1842. 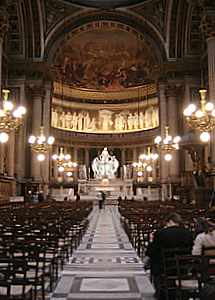 The Madeleine is built in the Neoclassical style with 52 Corinthian columns, each 20 meters high, surrounding the outside of the building, as well as 28 statues. At the back of the building are 4 statues representing the 4 Evangelists.

The main doors of the Church are made of bronze, weighing 3.2 tons, taller than the doors of St. Peter's in Rome and have bas-reliefs representing the Ten Commandments.

Inside, the church has a single nave with three domes. At the altar is a statue by the Italian sculptor Baron Charles Marochetti (1805-1867) of Ste. Mary Magdalene being carried up to heaven by two angels. This masterpiece took 22 years to complete, from 1835-1857. 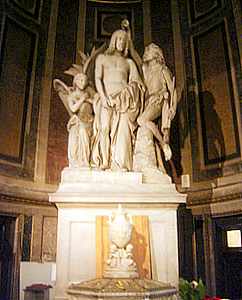 La Madeleine also has a statue of St. Augustine created by Antoine Etex (1808-1888) and two by François Rude (1784-1866), the "Baptisim of Christ" and the baptismal font. These two artists also contributed to the Arc de Triopmhe.

The church has a famous pipe organ built by Aristide Cavaillé-Coll (1811-1899), regarded as the finest in Paris. It has 4 keyboards and 58 stops. Composers Camille Saint Saëns and Gabriel Fauré were organists here and the funerals of Frédéric Chopin and Fauré were held here.

Often, there are concerts held in the church, many of them have free admission.