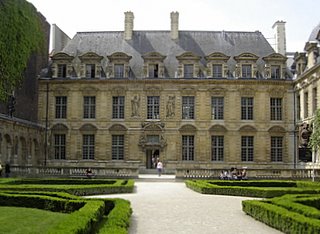 The Hotel de Sully was built between 1624 and 1630 by Mesme Galle. It was designed by architects Jean 1er Androuet du Cerceau and Yves Boiret in the Renaissance style with Baroque elements.

In 1634, Maximilien de Béthune, the first duc de Sully, minister of finance and superintendent of buildings for Henri IV, bought the Hotel thereby giving it the name it has today.

An additional wing was added in 1660, by his grandson, also Maximilien, the second duc of Sully. The Hotel de Sully continued to be owned by the family until the mid-18th century.

Ownership of the Hotel de Sully then passed through several hands. In the 19th century, it was used as an investment property and changes were made to accommodate trades and businesses.

In 1862, it was listed as a historic monument and, in 1944, it was purchased by the State. At that time, restoration began which wasn't completed until 1973. 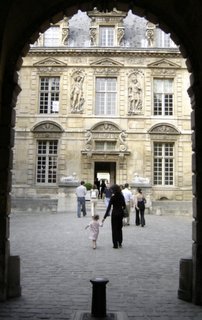 The Hôtel has two courtyards. The first, which opens onto rue Saint Antoine and at one time welcomed carriages, separates the mansion from the street.

Entering from rue Saint Antoine, on the right-side is the Information Center for the Center of National Monuments. This is the place for getting information, free maps and brochures on museums and monuments.

Under the second arch is a bookstore with books about anything French.

The second courtyard is the main courtyard. The four lawns are ornately hedged and there are several benches here for resting and enjoying this 17th century courtyard.

Located here is the exhibition room of Jeu de Paume-Site Sully. This is the site for the temporary photographic exhibitions of the museum Jeu de Paume, whose main location is in the north-west corner of the Tuileries Garden.

Prices and schedules vary depending on the exhibit.

The bas-relief sculptures that adorn the walls of this courtyard represent the four seasons and the elements. 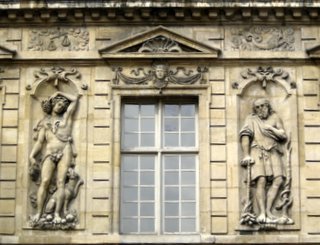 These same bas-relief sculptures of the seasons are also found on the façades of the Hôtel Carnavalet.

Along the back of the courtyard is a building which was originally the orangerie for the hotel, the greenhouse for the orange trees. It is now used as office space. 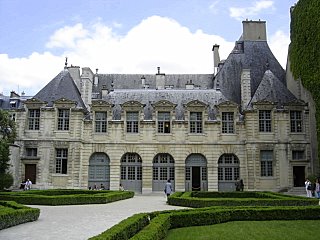 There is a door on the right-side of the Orangerie, in the corner next to the courtyard wall, that opens onto Place des Vosges.