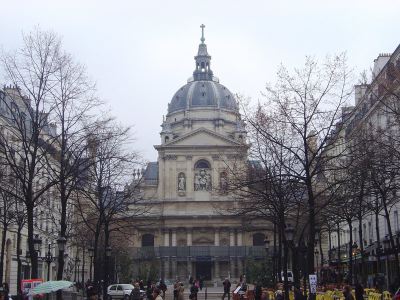 The Sorbonne University was first established in the 1257 CE.

The building that we see today date from the 17th century, having had extensive renovations toward the end of the 19th century

The College de Sorbonne was created in 1257 as a theology college by Robert de Sorbonne who was chaplain and confessor to Louis IX.

It was established in part as a reaction to what were considered in some conservative circles as the very liberal and at times heretical teachings being promoted at the time.

The 12th Century Enlightenment, precursor and rightful parent of the later Renaissance, had thrown open the doors and loosened the restraints of the Church in the areas of Philosophy, Medicine and Theology.

The establishment of the Sorbonne was an attempt to harness and slow that process. A successful attempt for it set a standard in learning and especially Theology that served over the centuries as the benchmark.

From 1622 to 1626 under the patronage of Armand Jean du Plessis, better know to history as Cardinal Richelieu, the complex we have today was constructed, and in appreciation for this patronage the Eglise du Sorbonne was added in 1637.

Upon his death in 1642 he was placed in a tomb within the chapel.

Return to the Top of Sorbonne