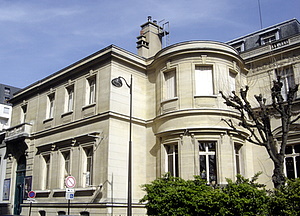 The Musee Marmottan-Monet is housed in the mansion that belonged to Jules Marmottan, purchased in 1882. Following his death, his son, Paul Marmottan, made it his residence. It is situated between Parc du Ranelagh and the Bois de Boulogne.

This is a museum of very particular and distinct collections of art ranging 700 years, from the 13th century to the 20th century. It is a personal museum, housed in the Marmottan residence with furnishings, easily seen as day-to-day comforts amongst the exhibited art. It is also a museum which offers an intimate look into the life and art of a master painter, Claude Monet.

Paul Marmottan (1856-1932), was an art historian, art collector and a poet. His father, Jules Marmottan (1829-1883), was an Administrator of Industry and the General Treasurer of the Gironde department of France.

Following his death in 1932, Paul Marmottan donated his mansion and art collection to the Académie des Beaux-Arts. It was inaugurated as the the Musée Marmottan June 21, 1934, specializing in collections of the First Empire.

The ground floor of the mansion is devoted mostly to the collection of Jules and Paul Marmottan; paintings, furniture, bronzes, ceramics and art objects of the Napoleonic era. It also has 16th century Renaissance tapestries from Bourgogne and wooden sculptures from the 15th century.

In 1981, the Musee Marmottan-Monet was donated the priceless Daniel Wildenstein collection of over 300 13th-16th century texts and paintings from the Italian, English, German and Flemish Schools.

Downstairs is a room fairly reminiscent of the Musee de l'Orangerie in the Tuileries Gardenwhere Monet's Grand Water Lilies, "Les Nymphéas", are housed.

Here, in this room, one finds Oscar-Claude Monet. Beginning with cartoonish sketches he drew in 1857 when he was 17 years old, to his work, "Impression: Soleil Levant" of 1873, which inadvertently gave the Impressionism movement its name, to his last paintings of his Giverny garden, clearly showing his cataract induced failing vision and his personal frustrations with old age. One of his palettes, encrusted with paint, is also displayed.

This museum is also "children friendly" in that there are audio-guides designed for the younger visitors. The museum also conducts monthly drawing contests for children. On-line games can be found on their website.

The museum is open from 10 a.m.-6 p.m. Wednesday through Sunday and open until 9 p.m. on Tuesday. It is closed on Monday, January 1st, May 1st and December 25th.

Admission is 10 euros for adults, 5 euros for those over 60 years of age and for students under 25 years old and free for those under 7 years old.

No photos are allowed and cell phones are asked to be turned off.

For further information, in English, here is the official website of the Musee Marmottan 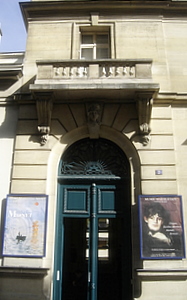