Garden of Champ de Mars
Home of the Eiffel Tower 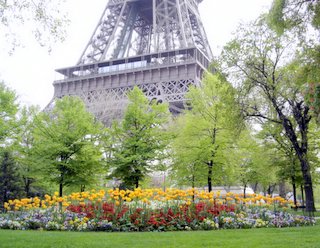 Covering 24.5 hectares, the Jardin du Champ de Mars, the Park of the Field of Mars, is one of the largest parks in Paris.

At roughly 800 feet across and nearly one half-mile long, it spreads from the Seine river to the Ecole Militaire (Military School), the foremost military academy in France.

The most prominent feature in the Garden of Champ de Mars is the Eiffel Tower, standing on the river side of the park. This is an open park, meaning, there are no gates surrounding it.

In the 16th century, the area of the Garden of Champ de Mars was used for growing vineyards and vegetables. In the 18th century, the military used the large field for the battle training maneuvers of up to 10,000 troops at a time. The military had the field enclosed with a grill-iron fence. It is from this use of the field that the park gets its name, in that Mars is the Roman god of war.

On July 14, 1790, the Field of Mars was first used as the site for grand celebrations. On this date, the Celebration of the Federation attracted 300,000 people who witnessed King Louis XVI grudgingly accept the newly written constitution. In 1837, the marriage of the duc of Orléans was held here. Between 1833 and 1860, the Champ de Mars was the site of a horse-race track. 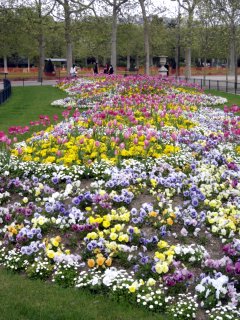 On July 17, 1791, a crowd gathered at Champ de Mars to draft a petition for the removal of King Louis XVI. Under the orders of Marquis de la Fayette the city's National Guard opened fire on the crowd and killed 50 people. This became known as the "Massacre at Champ de Mars".

The Garden of Champ de Mars has also been used for all but one of the six Universal Expositions held in Paris.

The most notable was held in 1889 for which the Eiffel Tower was constructed.

The last Universal Exposition held in Paris was in 1937, for which the Palais de Chaillot across the river was built.

It was for the Universal Exposition of 1889 that the architect Jean-Camille Fromigé re-designed the Champ de Mars by reducing it from its original 42 hectares. Early 20th century developers were able to reduce the field again until it reached its current size of 24.5 hectares. 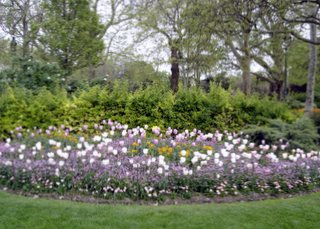 Today, the Champ de Mars is a vast lawn area with wide walking paths crossing the lawns. The borders of the park are lined with a variety of trees and flowering shrubs and scattered throughout the park are beautiful flower beds.

On Bastille Day, July 14th, the main fireworks display in the city are launched from here or across the river in the Trocadéro Gardens. The Garden of Champ de Mars fills with people enjoying picnics and waiting for night-fall as it is a superb vantage point for watching the always incredible fireworks display. 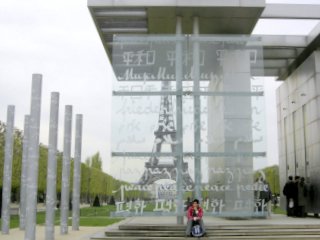 At the eastern end of the Garden of Champ de Mars, in front of the Ecole Militare, is the Monument to Peace, constructed in 2000. The word "peace" is written in 32 languages on 32 columns. A computerized keyboard inside the monument allows visitors to leave their personal message of peace.

There is also a gazebo for Sunday afternoon concerts in the park, a marionette theatre, children's playgrounds and even donkey rides are available here.

The Garden of Champ de Mars is included in our Private Guided Walk of Trocadéro to Invalidesand also featured in our Self Guided Walks in the tour Eiffel Tower From Palais de Chaillot.

Return to Top of Garden of Champ de Mars