Conciergerie
From Palace To Prison 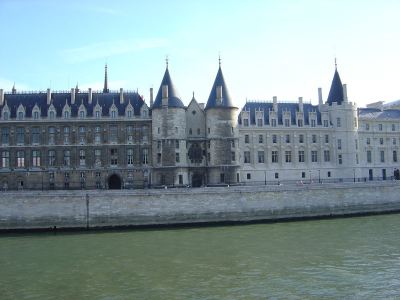 Go Here For Hotels in This Area

The Conciergerie was originally part of the palace of Philip IV (1284-1314). It was a section of the palace maintained by an official, the keeper of the royal palace, the concierge.

The ground floor levels, built in Philip's reign, are dominated by the Guardroom and the Hall of Men-at-Arms, exceptional examples of medieval secular architecture.

The latter is particularly striking: 209 feet long, 90 feet wide and 28 feet high, it was used as a dining-room for the 2,000 staff who worked in the palace.

It was heated with four large fireplaces and lit by many windows, now blocked up. It was also used for royal banquets and judicial proceedings.

The neighboring Guardroom was used as an antechamber to the Great Hall immediately above, where the king held his sessions of parliament.

The royal family abandoned the palace in 1358, moving across the river to the Palais du Louvre.

In 1391, the building was converted for use as a prison. Its prisoners were a mixture of common criminals and political prisoners. 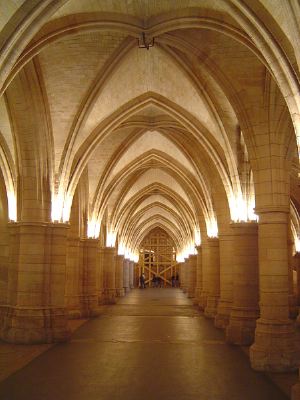 As was common with imprisonment of the time (unlike now, of course) the treatment of prisoners was very dependent on their wealth, status and connections.

The very wealthy or influential prisoners would get their own cells with a bed, desk and materials for reading and writing. Less well-off prisoners could afford to pay for simply-furnished cells, called "pistoles", which would be equipped with a rough bed and perhaps a table.

The poorest prisoners, known as the "pailleux" from the hay (paille) that they slept on, would be confined to dark, damp, vermin-infested cells called "oubliettes" (literally "forgotten places"). In keeping with the name, they were left to die in conditions that were ideal for the plague and other infectious diseases.

Three towers survive from the medieval Conciergerie: the Caesar Tower, named in honor of the Roman emperors; the Silver Tower, used as the royal treasury; and the Bonbec ("good beak") Tower, where prisoners were tortured, encouraged to "sing".

The first public clock in France was installed in the square tower in 1370. The clock there now is from 1535.

During the Revolution, the Conciergerie housed the Revolutionary Tribunal, and served as a prison for up to 1,200 male and female prisoners at a time. The Tribunal sat in the Great Hall between 1793-1795, and sent nearly 2,600 prisoners to the guillotine.

The most famous prisoner was Queen Marie Antoinette. Her cell was later converted into a chapel.

In the mid-1800s, the Conciergerie and Palais de Justice were renovated.

The Conciergerie opened to the public as a national historical monument in 1914.

Admissions for the Conciergerie are: 7 euros for adults; 4.50 euros for those between the ages of 18-25; free for those under 18 years of age or under 26 years old if EU citizen as well as for disabled guests and their companion.

A combination ticket of the Conciergerie and Ste. Chapelle is 11 euros for adults and 7.50 euros for those between 18-25 years old.

Return to Top of Conciergerie