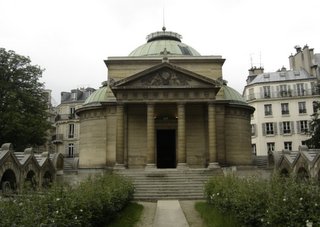 The garden area of Chapelle Expiatoire began in 1720 and was used as the new burial grounds of the parish of La Sainte Madeleine whose cemetery had outgrown its usefulness for the growing parish. It was used extensively for the next eighty years.

n 1770, it was used to bury the 133 people who were killed in an accident resulting from a fire and stampede that occurred at a fireworks display during the wedding of the dauphin, Louis, who was to become Louis XVI, and his wife, Marie Antoinette. It was not the last episode it played in the life of this King and Queen and the events that brought about the French Revolution.

On August 10, 1792, more than three hundred Swiss Guard were slaughtered while making a heroic stand to protect the Tuileries Palace from a mob. Their stand allowed the King and Queen to escape to Versailles. The bodies of the guard were buried in this cemetery of what was to become the grounds of Chapelle Expiatoire.

Before the Revolution had run its course, over 3,000 persons from every social standing in French society were to be buried here.

In January of 1793, the body of King Louis XVI was unceremoniously dumped into a pit here after his execution by guillotine. A few months afterwards, in October, the body of his wife, Marie Antoinette, was treated in similar fashion.

Pierre Descloceaux, a Royalist, took note of where the bodies were buried, bought the garden, and raised walls around it to protect the site.

During the Restoration of the monarchy in 1814, Louis XVIII began a search for the remains of his elder brother.

Pierre Descloceaux came forward with his account of where the bodies of the King and Queen could be found and gave the site to Louis XVIII.

The bodies were exhumed and carried to the Basilica of St. Denis, the traditional burial place of the kings of France.

Louis XVIII commissioned French architect Pierre Fontaine to build a chapel on the spot in expiation, forgiveness, for the crimes of the Revolution, and in memory of his brother and his Queen.

Taking over two years to clear the site for construction, Fontaine completed the work and Chapelle Expiatoire was inaugurated in 1826.

The dome of the chapel was the creation of architect Charles Percier.

The last service to be held in the Chapel was in 1882.

The Chapelle Expiatoire is surrounded by a lovely and inviting garden, Square Louis XVI.

It is a quiet and popular oasis of park benches, swaths of grass, plantings of flowering shrubs and beds of roses.

The many types of trees in the garden were planted to commemorate the different classes of people who died during the Revolution. 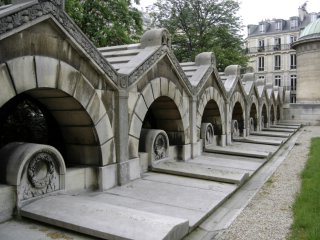 The Chapelle Expiatoire complex is built on three levels. There is an entry hall that leads to an enclosed courtyard, built to resemble a cemetery. The courtyard is of simple design, planted with roses and flanked with gravestones in remembrance of the dead.

The actual chapel is reached by climbing a set of twelve stairs and passing through a facade supported by simple Doric columns. The straight lines and simplicity of the building adds a somber and reverent tone to the entire complex.

Inside the chapel, the treatment is much more stylized.

The dome itself is supported by four columns. They represent The Trinity, The Law of Moses, The Blessed Sacrament, and the Paschal Lamb.

Above the entrance is a bas-relief sculpture commemorating the exhumation and procession of the remains of Louis XVI and Marie Antionette to the Basilica of St. Denis.

The interior carvings and bas-reliefs were the work of Gerard who also worked on the Arc de Triomphe.

The altar is centered along the back wall. Two marble statues complete the decoration of the interior. 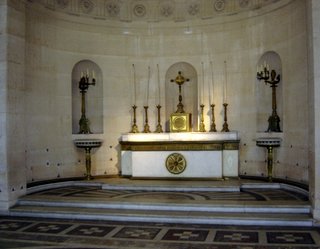 The marble statue to the left as you enter is of Marie Antoinette Supported by Religion. It is the work of Jean Pierre Cortot. 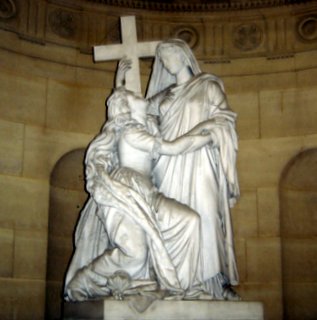 The one to the right is the work of Françoise Bosio and depicts Louis XVI ascending to heaven with the help of an angel. 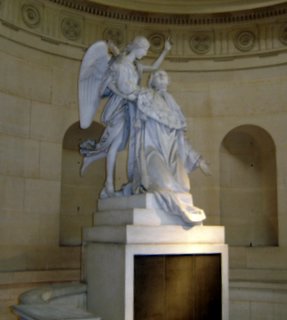 Both pieces are masterpieces of the 19th century.

Behind each of the statues is a stairway that leads to the crypt which is open to the public, and to the sacristy which is not. The crypt is simple in design with a brilliantly colored, circular stain-glass window directly behind the altar.

Chapelle Expiatoire is one of those smaller gems of Paris. It blends, history, art and architecture and offers an oasis of quiet from the activity of the surrounding city. 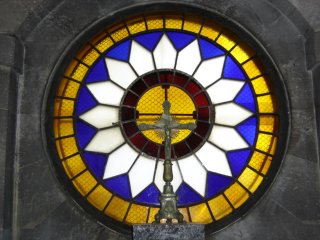 Return to Top of the Chapelle Expiatoire Page