Square du Temple
From Palace to Prison to Park 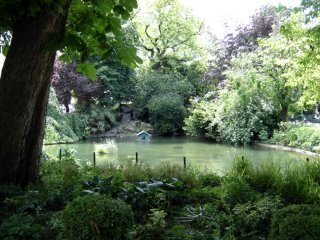 The square occupies part of the site of where the 16th century palace of the monastery of the Templiers and its garden sat.

In 1792, it imprisoned Louis XVI and Marie Antoinette. The tower also imprisoned the Dauphin, their son, until his mysterious disappearance in 1795.

In 1809, much of the palace was destroyed. With an order of Napoleon's, dated March 16, 1808, the Tower of the Temple was brought down in 1811. This meant that all but the Great Prior's palace of the ancient templar monastery had been destroyed.

In 1853, however, during the massive city-wide renovations of Baron Haussmann under Napoleon III, the Palace of the Grand Prior was demolished so as to make room for the present-day square.

The Garden in the Square du Temple was designed by Alphand in 1867 in the English-garden style. There is a large pond with a small waterfall cascading over rocks brought from Fountainbleu. The pond is surrounded by green and flowering shrubs and some rare varieties of trees. 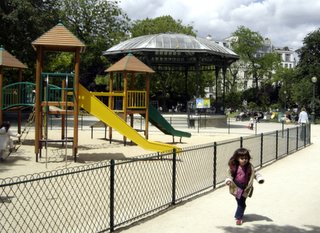 The ornamental main gate was designed by Davioud and there is a gazebo for afternoon concerts next to a children's playground.

The large grassy area is a favorite spot for picnics and lunches on a sunny day and there are many benches to be found in the sun as well as in the shade.

Also found under the shade, just to the left (north) as one enters the Square through the main entrance, is a stone bust of poet and cabaret singer, Béranger, created by Lagriffoul. 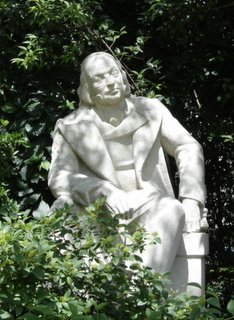