Parc de Bercy
A Fascinating Park and the Palais Omnisports 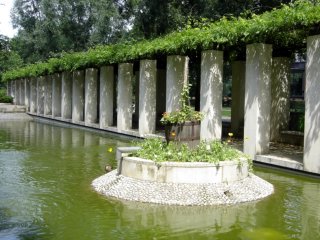 The history of the Parc de Bercy area begins in the 12th century when it was the estate of a feudal lord. Later, during the reign of Louis XIV (1643-1715), the first wine warehouse in Bercy opened.

This was the beginning of what was to become the "store-room of the world" for wine. During the 19th century, Bercy was the largest center of wine and spirits trade in the world.

Between 1840-1845, the fortifications of Thiers, or the enclosure of Thiers, was built. This wall, named for the Prime Minister Adolphe Thiers under Louis Philippe, had a periphery of 33 kilometers and included 94 bastions, 17 gates, 8 railroad passages and 5 river passages. In 1859, the fortifications of Thiers was the official limit of Paris. It was the last enclosing wall built around the city. It was dismantled between 1919-1929.

During the 19th century, the wine trade was flourishing. The area of Bercy came to be a huge wine depot for three main reasons: location, location, and the absence of taxes in the area, due to its location. At that time, Bercy was in close proximity to Paris but not within city limits and therefore not required to pay city taxes.

Situated on the right bank of the Seine river, Bercy was connected to the wine region of Burgundy via the river. The Bercy area also had a train station, now dismantled, which served as a direct line to the wine country.

The demolition of the fortifications of Thiers in 1919 also took down some of the warehouses here. Bercy was then incorporated into the City of Paris and lost its non-tax advantage.

With improved technology for the storage of wine as well as wine starting to be bottled at the place of production and the changing of the railroad lines, the wine warehouses of Bercy were in decline. By 1950, the warehouses were suffering and by the 1970s they were completely abandoned. In 1979, the majority of the warehouses were demolished. 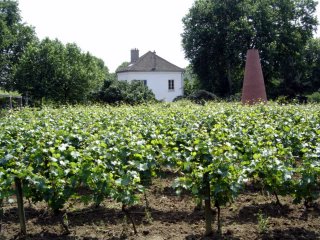 To preserve the memory of the history of the area, a vineyard is planted in the Parc de Bercy. 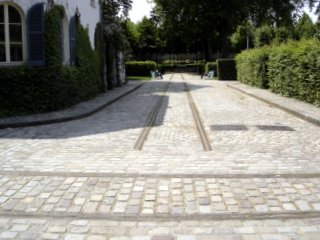 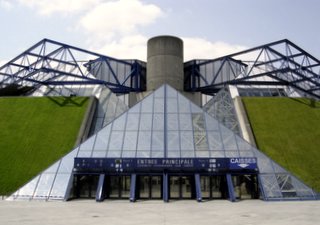 On the western end of Parc de Bercy is the Palais Omnisports de Paris Bercy,(P.O.P.B.) built in 1983. Its shape is that of a terraced pyramid and the sides of the building are covered with grass (which must be the most difficult of all the lawns in Paris to mow). 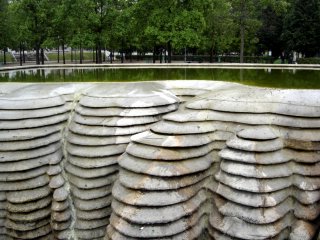 Within Parc de Bercy and east of the Palais Omnisport stadium is a small, man-made canyon on the edge of a pond. The "Canyoneaustrate" was created by Gérard Singer in 1988. 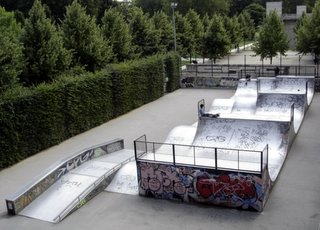 To the south of this creation is an enclosed skateboard/rollerblade park with slopes and jumps made of metal. 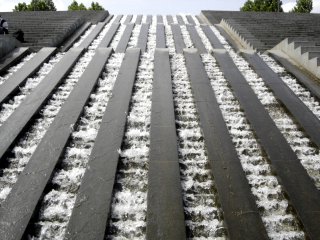 East of this skateboard park is a wide stairway that leads to an expansive terrace. Down the middle of this stairway are several channels of water making a very interesting cascading fountain. 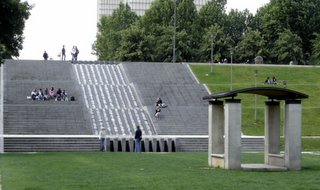 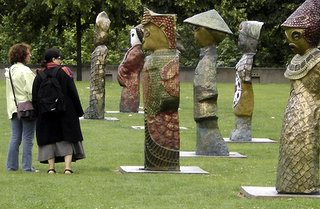 The elevated terrace on the south side of the park borders the Seine river. Placed here are playful statues representing different ethnicities and some comical characters. 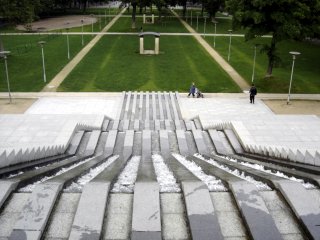 East of the expansive lawns which make up the central part of Parc de Bercy, is the Jardin Yitzhak Rabin, named in honor of the Prime Minister of Israel from June 1992 to November 1995, recipient of the Nobel Peace Prize in 1994 and who was assassinated on November 4, 1995.

The Garden of Yitzhak Rabin contains many of the more interesting features of Parc de Bercy... 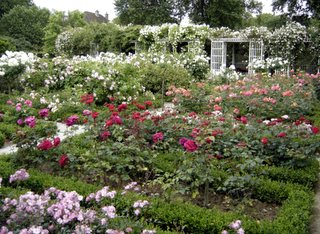 ...a beautiful Rose Garden of 95 varieties of roses, 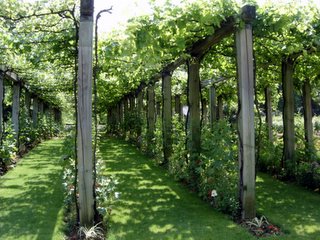 ...a series of trellises covered with flowering vines, 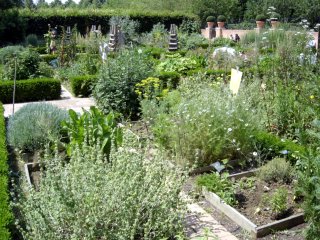 ...a Vegetable Garden, maintained and cultivated by the school children of Paris.

There is also a Labyrinth made of five-foot tall yew hedges, a Vineyard and a House of Gardening, Maison du Jardinage, which provides information on all aspects of gardening. 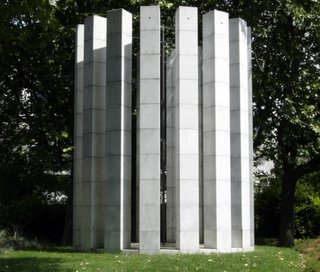 Parc de Bercy has a House of Wind which consists of several square columns forming a circle. Within the circle is a weather vane which measures wind direction and velocity.

Planted in the park is a Garden of Bulb Flowers featuring mostly peonies, a Garden of Scents, an orchard and there is a greenhouse.

Parc de Bercy has a small children's playground and a carousel. The carousel operates everyday. On Monday, Tuesday, Thursday and Friday the carousel runs from 4 p.m.-7 p.m. On Wednesday, Saturday and Sunday it runs from 4:30 p.m.-7 p.m. 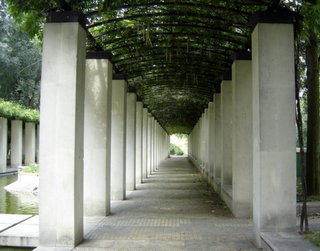 There is a pond which is bordered on both sides by wisteria covered square columned arcades. 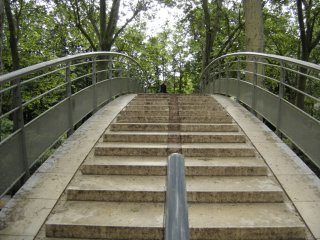 The Cour St. Emilion has lawns which undulate with small hills. There are many distinctive sitting areas here in flower gardens and next to ponds.

The openness of the park is unobtrusively sectioned into more intimate spaces by small hills and arbors and sunken sitting areas. In the late afternoons, one finds many couples here, leisurely enjoying their time together.

There is Lake House which sometimes offers exhibitions on gardens in Paris and lectures on garden arts. 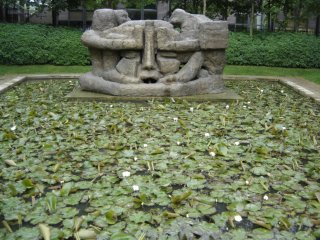 On the east end of Cour St. Emilion is a pond covered with water-lily plants. In the pond is a sculpture called "La Demeure #10" created by Etienne Martin in 1968.

Beyond here is the Bercy Village, a newly developed chic shopping area with restaurants, bars and cafés all of which occupy some of the smaller old wine warehouses. The Ecole de Boulangerie et de Patisserie de Paris, the School of Bakery and Pastry, occupies some of the larger old warehouses.

Here in Bercy Village, you will find metro station St. Emilion on line #14. 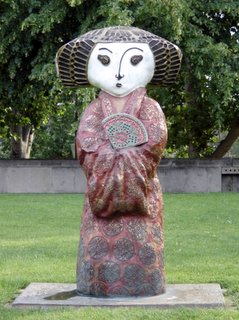