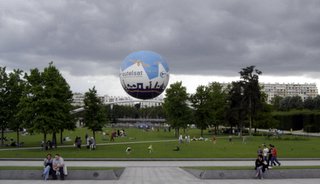 Parc Andre Citroen is named in honor of the man who created and manufactured the Citroën automobile.

The park occupies the site where the Citroën factory stood from 1915-1970. When the factory was moved to outside of Paris, twenty-three hectares of land became available on the left bank of the Seine River. Fourteen of these hectares (thirty-five acres) were used to create the Parc Andre Citroen.

The rest of this newly available land, plus seven more hectares from the closing of two warehouses, was used to develop 2,500 residential and office buildings, including the ultra-modern Le Ponant de Paris which borders the Parc Andre Citroen.

The Le Ponant de Paris is a concrete and glass structure designed by René Galy Dejea and built in 1988. It was inaugurated by Mayor Jacques Chirac and President of SEMEA XV on April 27, 1989. It houses the SAGEM Company, the Groupe Banques Populaire, Canal +, and other businesses. 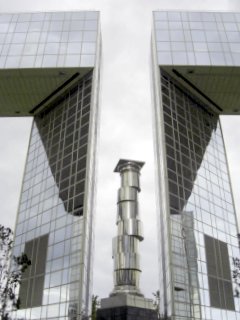 The European Hospital Georges Pompidou neighbors the Le Ponant and Parc Andre Citroen. It was designed by Aymeric Zublena, costing more than 270 million dollars to construct. It has the patient capacity of 870 beds, 90% of which are in private rooms.

Following a competition in 1985 for the design of Parc Andre Citroen, two teams with complementary projects were selected. They were Gilles Clément and his partner Patrick Berger and the team of Alain Provost, Jean Paul Viguier and Jean Francois Jodry. Alain Provost was appointed supervisor of the entire project.

What was created is a modern, geometrical, compartmentalized and open spaced park. It succeeds at integrating nature into a modernistic urban setting.

Parc Andre Citroen is divided into several parts, the main of which are The White Garden to the east, one hectare in size, the Black or Dark Garden on the west side, two hectares large and the Central Park of eleven hectares.

The White Garden is separated from the main of Parc Andre Citroen by rue Balard. The White Garden is perfectly square and enclosed by a four-foot wall. The garden is highlighted with white flowering and white accented plants. It is surrounded by a playground with ping-pong tables, sand-boxes and a fenced-in basketball court. The Grenelle Cemetery borders it on the west.

Surrounding this garden, and not immediately visible, is a sub-ground-level of individualized gardens circling the plaza area. Walkways with dangling ivy occasionally cross over these sunken gardens.

The Central Park consists of a large, rectangular expanse of lawn, diagonally sliced by a walkway. The lawn is enclosed by a narrow, shallow moat. On the south side of the lawn are the architectural highlights of the park; two very large, fifteen meter-high glass greenhouses. 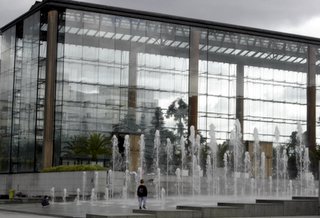 One of these, the Austrauan Greenhouse, holds plants from Mediterranean climates, the other is an Orangerie operating between October-April. Both greenhouses are bordered by dozens of closely trimmed Magnolia trees, some of which are standing on their own islands in a pond.

Between the greenhouses in Parc Andre Citroen is a plaza containing 120 individual fountains which rhythmically shoot vertical jets of water at heights varying from 7 inches to 7 feet. 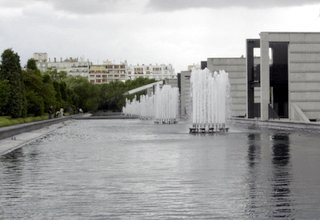 On the west side of the Central Lawn is an elevated, rectangular pool which extends 250 meters. On one side of this pool are small pavilions that enclose small ponds at the lawn level. The west side of the pool is bordered by many trees and flowering shrubs, including oaks, bamboo, hosta and willows. 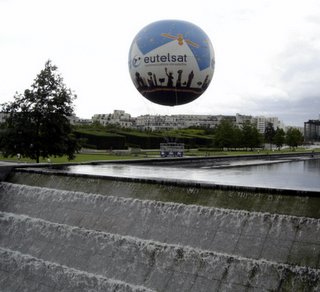 On the east side of the Central Lawn is a series of delightful individualized gardens which run side-by-side. These Gardens are separated from each other by walkways and canals of cascading water which lead to individual greenhouses.

These greenhouses are also sitting-rooms and are themed in correspondence with the Theme Garden they are adjacent to. These Gardens, and green-houses, are associated with a color, a metal, a planet, a day of the week, a form of water and a direction:

Each Garden has a different geometric design, increasing the distinctions from one to its neighbor. Even the approaches to each garden are different. The one thing these gardens do have in common is a bronze information sign placed at the entrances, etched with the design of that garden and the names of the plants found there. 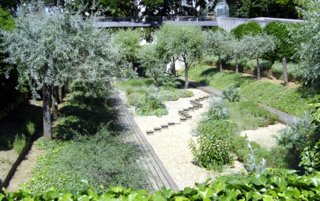 The Gold Garden has two narrow trails that lead into it. This Garden uses such plants as yellow roses, beech trees and golden robinier trees.

The entrance to the Silver Garden is a descending ramp, bordered by walls on both sides. These walls increase in height as you descend into the Garden, increasingly restricting your view. At the end of the walls, the Garden suddenly appears. This garden has an arid aspect to it with gravel walkways, olive trees and sage. 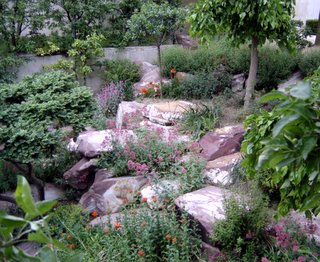 The Red Garden is an open lawn with a downward slope leading to its red-rock garden. On either side of this garden are tree-lined terraces. 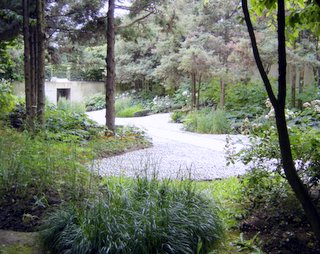 The Orange Garden is accessed by a tunnel. Its central feature is a flow of rocks spreading out from the trail that cuts through a variety of Japanese azaleas and alstroemerias, planted amongst pine trees. 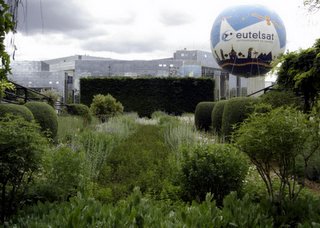 The Green Garden is an English-country styled garden. It uses acanthus, ilex, iris, miscanthus and acer. 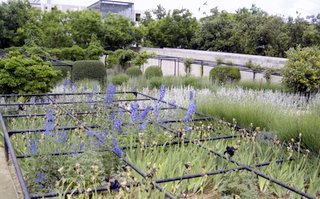 The Blue Garden doesn't seem to have borders. It also doesn't have any trees. It does, however, have metal frameworks which support clematis vines and an arbor of wisteria. Found here are delphiniums, lavenders, irises, campanulas, ceanothuses and stachys. 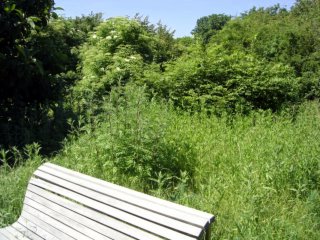 The next Garden is the Wild Garden, or the Garden in Movement. It is a large and completely overgrown area with groves of bamboo, mounds of old-fashioned rose bushes, daisies, tall Queen Anne's lace, wildflowers and lots of weeds.

This area of Gardens in Parc Andre Citroen has benches that are actually comfortable which are found in the shade and in the sunshine. 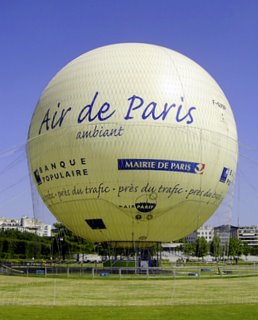 Also available here as a major attraction of Parc Andre Citroen is a helium balloon ride. This balloon holds up to 30 adults or 60 children. It floats to a height of 150 meters offering unobstructed views of Paris. The balloon itself is 32 meters tall and 22 meters in circumference. 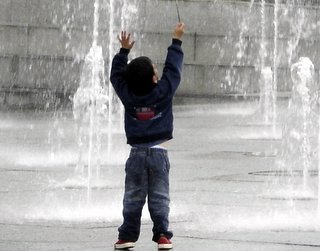