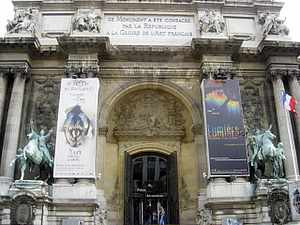 The Palais de la Decouverte, the Palace of Discovery, was brought about through the efforts of Jean Perrin, Nobel Prize winner in Physics of 1926 for his work on the atom.

The idea of such a museum was first undertaken by André Léveillé, vice-president of the Confederation of Intellectual Workers.

In creating this educational museum, Perrin wanted to demonstrate the role which science has played in the creation of our civilization and that "nothing new could be hoped for, nothing could change destiny except research and discovery".

In 1937, at the International Exposition of Arts and Techniques in Modern Life, the Palais de la Decouverte was given 25,000 square meters, half of the Grand Palais exhibition space. More than 2,225,000 people visited the Palais between May-November 1937. 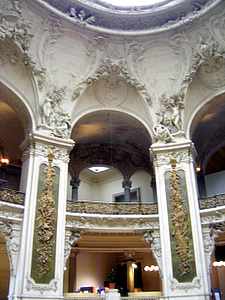 In 1990, the Palace of Discovery came under the jurisdiction of the Ministry of National Education and Research and Technology.

This means that it is directed by scientists with the aim of education. This is achieved through the use of permanent and temporary exhibitions, lectures and interactive experiments and demonstrations and workshops for adults and children.

The Space Odyssey of Ariane V is a digitaly projected simulation in 3D of two space missions.

Voyage Into the Cell is a film in 3D which takes viewers into the middle of a cell to discover its complexity and its beauty.

Earth and Life presents the metamorphosis of the geography and climates of Earth since its origin. By the use of investigative research, one learns that the emergence of life and the appearance of different species of animals and vegetation is linked to the different phases of Earth's evolution.

Questions of Atmosphere deals with the concerns of meteorology, climate and problems relating to the o-zone.

The Palais also has a Planetarium made of a cupola of 15 meters in diameter on which the night-sky and all celestial phenomena are presented, including seeing Earth from another planet.

Each of the several different programs of the Planetarium lasts approximately 45 minutes. A supplemental fee of 3.50 euros is charged. Hours for the Planetarium are from Tuesday - Friday: 11:30, 2:00, 3:15 and 4:30. On Sunday and holidays and during summer a 5:45 p.m. program is added.

An Electrostatic demonstration is presented at the Palais de la Decouverte, bringing to life the 2nd most powerful force in the universe, after nuclear power.

Admissions and Hours of the Palais de la Decouverte

Planetarium admission is an additional 3.50 euros.