Musee Rodin
Home of the Artist 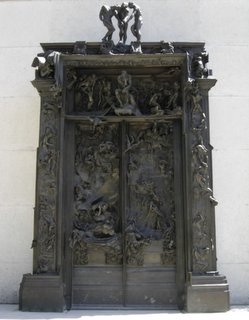 The Musee Rodin opened in 1919 in the Hôtel Biron. It displays works by the French sculptor Auguste Rodin.

Born François Auguste René Rodin, in Paris, he stands at the culmination of the figurative tradition in sculpture, as after him sculptors increasingly turned towards abstraction.

One of his early works, "The Age of Bronze", created during his years in Belgium, looked so realistic that the sculptor was accused of surmoulage (taking plaster molds from a live model).

Rodin struggled to clear his name and, in 1880, he was awarded the commission to create a portal for the planned Museum of Decorative Arts.

Although the museum was never built, Rodin worked nearly all his life on his major work, "The Gates of Hell", depicting scenes from Dante's, "Inferno", in high relief.

Many of his best known sculptures, "The Thinker" ("Le Penseur", originally entitled "The Poet", representing the poet Dante) and "The Kiss", ("Le Baiser"), were originally designed as figures for this monumental landscape of eternal passion and punishment, and only later presented as works in their own right.

In his studio, these models would walk around freely while the sculptor made quick sketches in clay, which were later eventually worked out, cast in plaster and translated into bronze or marble.

All his life, Rodin was fascinated by dance and spontaneous movement; his "John the Baptist" shows a walking preacher, displaying two phases of the same stride simultaneously.

In 1883, Rodin agreed to supervise Boucher's sculpture course during his absence and so met the 18 year old sculptress Camille Claudel. Rodin fell in love with his talented pupil.

Camille recognized her chance to be tutored by the greatest sculptor talent of her time, who was just breaking through to fame. Camille inspired Rodin as a model for many of his tragic love couples and assisted him during his work on another important commission, "The Burghers of Calais" ("Les Bourgeois de Calais").

Although they shared a studio in a little old castle at 68 Boulevard d´Italie, Paris, Rodin refused to give up his ties with Rose Beuret, his loyal companion during his years of poverty in Belgium and mother of their son Auguste Eugène Beuret, born Jan. 18, 1866.

A contract in which Rodin promised to give up all contact with other women, and marry Camille, was never fulfilled. After nearly 15 years, the couple broke up. Camille went her own artistic way, but, found herself isolated.

Rodin, commissioned to create a monument to Victor Hugo in the 1890s, extensively dealt with the subject of Artist and Muse, reflecting the various aspects of his stormy and complex relationship with Camille: "The Poet and Love", "The Genius and Pity", "The Sculptor and His Muse".

Like many of Rodin's public commissions, the monument to Victor Hugo met resistance because it did not fit conventional expectations; the 1897 plaster model was only cast in bronze in 1964.

Rodin's "Monument to Balzac", exhibited at the 1898 Salon at the Champ de Mars, showing the writer in his morning frock, was repudiated as well. It is now located in the Garden of the Musee Rodin.

After this frustrating experience, Rodin never finished another public commission. Instead, after 1903, he had his most successful works enlarged to monumental dimensions. As one of France's most famous artist, he could afford to have a large staff of pupils and craftsmen working for him.

He also created a large number of society portrait busts, especially for wealthy American collectors, and began presenting fragmentary sculptures, which, in his opinion, contained the essence of his artistic statement, as in "Meditation Without Arms", "Iris, Messenger of the Gods" or "The Walking Man".

The Musee Rodin was founded to administer and exhibit the huge body of work (over 5,000 plaster items, over 1,000 bronze sculptures, ca. 8,000 drawings, and as many photographs) Rodin left to the French Government by several deeds of donation, shortly before his death.

A part of this collection is shown at the Hôtel Biron, much of it displayed in the lovely outdoor Garden of the Rodin Museum. The plaster collection is mainly kept at the Villa des Brillants in Meudon, a suburb of Paris, where Rodin lived and worked during the last decades of his life.

With his works, Rodin also transferred the rights of reproduction to the Musee Rodin. According to French Law, only 12 copies of each work can be issued as an "original edition".

Although the copyright to Rodin's work expired in 1987, 70 years after the artist's death the Musee Rodin still exerts "le droit moral", the moral right, to prevent damage to the artist's name with copies of inferior quality.

Rodin used the Hôtel Biron as his residence from 1908 and subsequently donated his entire collection of sculptures (along with paintings by Vincent van Gogh and Pierre Auguste Renoir that he had acquired) to the French State on the condition that they turn the building into a museum dedicated to his work.

The Musee Rodin contains most of Rodin's significant creations, including, "The Thinker" and, "The Kiss".

The Musee Rodin has also a room dedicated to works of Camille Claudel.

Return to Top of the Musee Rodin PageReturn to Paris Museums