Musee Picasso
Art Instead Of Taxes 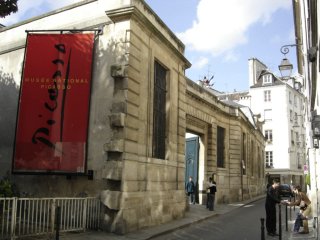 The main staircase and the carved decorations were done by the Gaspard brothers, Balthazar Marsy and by Martin Desjardins.

The name of the building, the Hôtel Salé, the Salted Hotel, comes from the profession of its first occupant, Pierre Aubert, lord of Fontenay, who was a salt tax collector.

Starting from the end of the 17th century the hotel was used for several purposes. It has been the Embassy of the Republic of Venice; an institution for young people; a National Library and the Ecole Centrale des Arts et Manufactures, which Balzac attended. The City of Paris bought the building in 1964 and classified it as a Historical Landmark in 1968.

In 1975, two years after Picasso's death, the hotel was leased to the state for the purpose of this museum and restoration of the building was done between 1975-1984.

In 1976, following a competition, architect Roland Simounet was given the job of arranging the Musee Picasso in the Hotel Sale. The decorative elements such as benches, chairs and tables were especially created for the Picasso museum by Diego Giacometti.

The museum opened to the public in 1985.

The collection of the Musee Picasso includes over 200 paintings, 190 sculptures, 80 ceramics and over 3000 drawings, engravings and manuscripts. Some of his personal collection of art is also exhibited including works of Cézanne, Matisse, Corot, Chardin and Renoir. There are Nimba masks from New Guinea, Iberian bronzes and sketches by Giorgio de Chirico and Degas.

These works and collections of Picasso comes to the state of France in lieu of inheritance taxes owed to France by the Picasso family. The collection was further enhanced in 1990 with over 40 paintings from the heritage of Picasso's widow, Jacqueline Picasso, when she passed away.

This very large collection of art from a very prolific artist fills the hotel, from the basement to the top floor and out into the garden. A small outdoor café is located in the garden.

The Picasso Museum also offers temporary exhibits several times a year. Films are presented in a special cinema and a library is available.

The Bookshop and Boutique of the Picasso Museum is open the same hours as the museum and freely accessed, admittance into the museum is not required.

The Picasso Museum is closed for renovations until Spring 2013.

Return to Top of the Musee Picasso Page