Musee Bourdelle
Home and Studio of the Artist 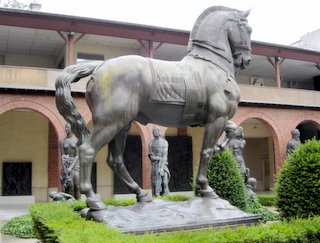 The museum was the home and workshop of Antoine Bourdelle, one of the great sculptors of the late 19th and early 20th century.

Emile Antoine Bourdelle was born October 30, 1861, at Montauban, Tarn-et-Garonne, France. He left school at the age of 13 to work as a wood carver in his father's cabinet making shop.

He learned drawing with the founder of the Ingres Museum in Montauban, then sculpture at the art school in Toulouse. At the age of 24 he won a scholarship to the École des Beaux-Arts in Paris.

He became one of the pioneers of 20th century monumental sculpture. Auguste Rodin became a great admirer of his work and in 1893 Antoine Bourdelle joined Rodin as an assistant, but heeding the advice of a mentor that "very little grows in the shadow of a great tree", Bourdelle left Rodin's employ to open his own workshop and studio where he soon became a popular teacher. 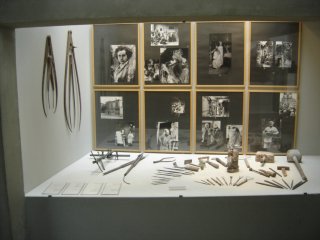 Many future prominient artists attended his classes, so that his influence on sculpture was considerable.

Antoine Bourdelle died at Le Vesinet, near Paris, on October 1, 1929, and was buried in Paris, in the Cimetière du Montparnasse, not far from his home where he had lived and worked since 1884. 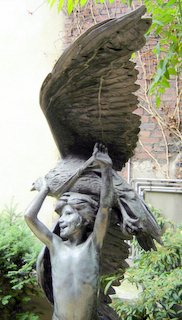 Before his death, Antoine Bourdelle envisioned the continuation of his work by creating a museum where his works could be displayed with a workshop where aspiring artists could work and find guidance. With this in mind, he made plans to transfer the title of his home to the City of Paris and to bequeath many of his works and possesions to the Musee Bourdelle. The city of Paris has been greatly enriched by his gift. 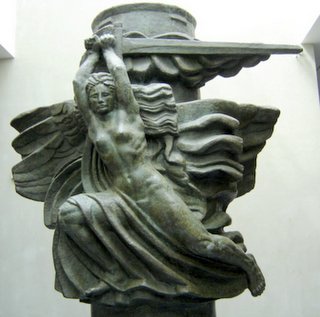 The Musee Bourdelle has gone to great lengths to preserve the home and workshop atmosphere creating a charm and an intimacy that makes this a world class museum and a fitting tribute to this great artist.

In 1961, on the 100th anniversary of Bourdelle's birth, the Great Hall was added, designed to accommodate and display the monumental figures of which Bourdelle had become a master.

As you enter the Great Hall, though mythic figures flank you on either side, your eye is drawn to the far end where under the rotunda sits Bourdelle's "Dying Centaur", a magnificent, haunting work, simple in form with a geometrical purity.

The room is dominated by a model of the monumental work of General Alvear, one of the leaders of Argentina's independence movement. There are six main elements to this monument, the General, his horse and the four allegorical figures of Eloquence, Force, Freedom and Victory. The work was first commissioned in 1913 and was inaugurated in Buenos Aires in 1926.

Also in the great hall is the full scale model of "Heracles Archer", or "The Archer", as it is also known.

This statue depicts Hercules shooting the birds of Stymphalos, which was one of the Twelve Labors of Hercules in Greek mythology. 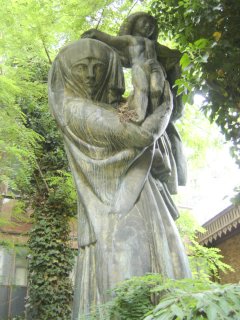 The Great Hall also contains the full scale model of the "Virgin with Child".

In 1991, a further renovation added the new reception hall and an impressive four story building erected in the heart of the complex. This new building of nearly 1,700 square meters houses galleries, document archives and workshops for aspiring artists.

The lower floor of the gallery contains models of the work that Antoine Bourdelle loved dearly, the tribute to the Polish Independence leader Adam Mickiewicz. This poet and leader captured Bourdelle's imagination and spirit and Bourdelle was captivated by this work.

"The Monument to Mickiewicz" stands today just east of the Place de l'Alma in the Cours Albert 1er garden along the Seine River in the 8th arrondissement. 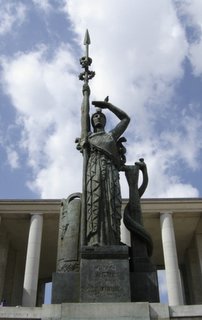 Standing in the courtyard of the Palais de Tokyo and the Musée d'Art Moderne is Bourdelle's tall and elegant statue entitled "La France", created in 1925.

Musee Bourdelle contains over 800 sculptures, thousands of drawings, documents and manuscripts and the artists own personal art collection.

The Musee Bourdelle is one of the few remaining examples of the many artists homes and workshops that populated the Montparnasse area of Paris during the turn of the century.

The Musee Bourdelle is open Tuesday-Sunday from 10 a.m.-6 p.m. It is closed on Monday and holidays.

Admission to the permanent collection is free.

With its intimacy and its everyman's garden feel, it is a remarkable and magical place. Don't pass up the chance to visit this little-known treasure of Paris.

Return to Top of Musee Bourdelle