Memorial of the Shoah
Tomb of the Unknown Jewish Martyr 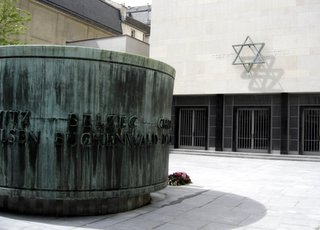 The Memorial of the Shoah was previously called the Tomb of the Unknown Jewish Martyr. The Mémorial de la Shoah was inaugurated by President Jacques Chirac on January 25, 2005.

The Tomb of the Unknown Jewish Martyr was built between 1953-1956 and designed by architects Alexandre Perzitz, Georges Goldberg and Léon Arretche. It was inaugurated on October 30, 1956. It was renovated by architect Jean-Pierre Jouve in 1992.

The Memorial of the Shoah is a remembrance of the six million European Jews who died in the Holocaust of World War II.

The Memorial honors, as well, the 76,000 people deported to concentration camps during the German occupation of Paris, aided by the Vichy government.

To enter the Memorial one must pass through a double set of locking doors into an enclosed courtyard.

This gives the unmistakable feeling of internment and imposed security, as if the architects wanted the visitor to feel captured for the moment.

Along one side of the courtyard, artist Arbit Blatas has sculpted, in bas-relief, seven images of the Holocaust on bronze plaques mounted into the stone wall. They were placed here in 1982. 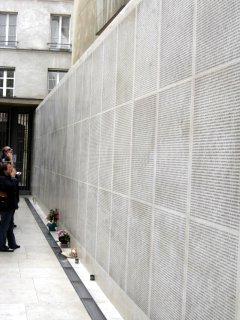 The Memorial includes a Wall of Names, where the names of the 76,000 Jewish men and women, including 11,000 children are inscribed, along with their birth year and the year in which they were taken.

Taking the stairs down to the crypt, there is a recreation of the front of a concentration camp barracks and a model of the Warsaw Ghetto.

In the crypt, and most evocative, is a large, black marble Star of David holding an Eternal Flame. This is a striking symbol for the tombs of those victims never buried.

Beneath this haunting symbol are the ashes of victims from the death camps and the Warsaw Ghetto, interred in soil brought from Israel by Chief Rabbi Jacob Kaplan on February 24, 1957.

Past the crypt are displays of newspapers, documents, diaries, photo exhibits, texts and videos relating to the history of Jews in France, the years of Jewish persecution during World War II, the history of anti-Semitism in Europe, accounts of Jewish resistance and more.

Also exhibited is a Memorial of the Children killed in the Shoah.

The Memorial of the Shoah also houses the Center of Contemporary Jewish Documentation. Here are reading rooms, meeting rooms, a multi-media learning center, an auditorium, temporary and permanent exhibits, a bookstore and a café.

There is also a room which contains the Vichy Government police files on Jews from 1941-1944.

The Memorial of the Shoah is a powerful and emotionally moving experience. It is a place to learn and to remember.

Leaving the Memorial, one must again pass through a set of double locking security doors. It gives the impression of being released, freed, something that most of those imprisoned in the concentration camps never experienced.

The Memorial is open Monday-Sunday from 10 a.m.-6 p.m. and until 10 p.m. on Thursday. It is closed on Saturday and national and Jewish holidays.

There is no admission fee. Appropriate attire is requested.

Of further interest, we recommend a visit to the Memorial to the Martyrs of the Deportation.

For more information, visit the Memorial of the Shoah Website.

Return to Top of Memorial of the Shoah Page