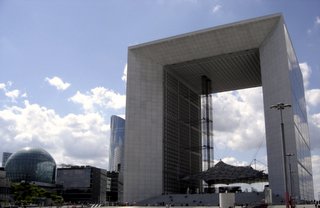 Go Here For Hotels in This Area Map of the Area

The area is named for a statue called, "La Défense de Paris" that had been standing there since 1883, then removed in 1971. The statue is now located, since 1983, just west of the Agam Fountain, on the Place de La Défense.

Since the 1950s, this area of 80 hectares had been considered for development. In 1958, the "first generation" of buildings were built. These buildings were identical and limited to 100 meters in height. Then, in 1967, the first skyscrapers of Paris were under construction here. 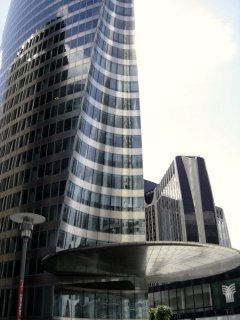 For unity in the architecture, structures were required to be, at the base, 24 meters by 42 meters for every 100 meters in height. Residential buildings were limited to 10 floors high.

Since then construction has continued to where the area now has around 60 buildings. The tallest nine buildings, built between 1974-2002, range between 38-48 floors. 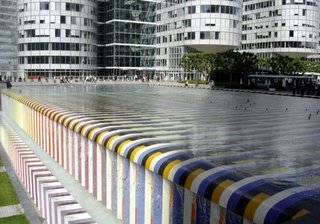 Standing as a gateway to this cluster of skyscrapers in La Défense is the immense Grande Arche of La Défense. 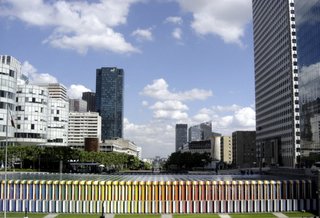 The center of La Défense is a broad, 3 kilometer long pedestrian walkway consisting of two parks, the Parvis or the Place de La Defense and the Esplanade du General de Gaulle. Throughout this area are scattered about 70 works of art including huge sculptures and murals by such artists as Miro, Calder and Agam. 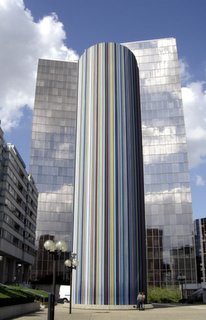 Also located at La Defense are the Dôme IMAX Theatre of Paris and the Musée de l'Automobile, the Automobile Museum.

There is a small shuttle train providing a 30 minute tour of La Défense with commentary in English. It runs everyday and begins at the Grande Arche. The fees are 5.50 euros for adults and 3.50 euros for persons under 18 years of age.

Return to Top of La Defense