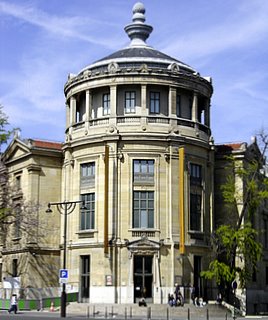 The Guimet Museum, the Musée National des Arts Asiatiques Guimet, holds the largest collection of Asian art outside of Asia.

This museum was initiated by Emile Guimet (1836-1918), an industrialist from Lyon, France. In 1865, he first visited Egypt and Greece. He was profoundly struck by the ancient monuments and the beliefs of the people of the time which inspired these creations. He was soon participating in international archaeological and anthropological conferences and became a member of the Asiatic Society.

In 1874, he visited the Museum of Ethnography in Copenhagen and wondered if France couldn't also have such a museum.

In 1876, the Ministry of Public Instruction of France commissioned him to travel to Japan, China and India to study the religions of the East. He soon acquired an exceptional collection of 300 paintings and 600 sculptures.

Some of this collection was exhibited at the Exposition Universelle of 1878 in Paris. It was such a success that, in 1879, a museum was built in Lyon devoted to world religions. The collections of this museum were transferred to Paris in 1882, for which Guimet built a new museum inaugurated in 1889. The focus of this museum became more and more specialized to Asian civilizations.

The collection of the Guimet Museum progressively grew over the years with the return of different expeditions from the various countries of Asia.

In 1927, the French Museums Directorate acquired control of this museum. Artifacts acquired on expeditions to Central Asia and China by Paul Pelliot and Edouard Chavannes were added to the Guimet museum. Also in 1927, the Trocadéro Musée Indochine was integrated into the Musée Guimet.

Through the 1930s the French Archaeological Delegation to Afghanistan contributed artifacts. The central courtyard was roofed in 1938 to allow for the display of the Khmer collection.

In 1945, the Louvre transferred its Department of Asian Arts to the Guimet Museum in exchange for Guimet's Egyptian art.During the following years, the Musée Guimet continued its specialized acquisitions of artifacts and improvements to the building.

By the mid 1990s, it was apparent that the Guimet Museum needed re-organizing. It had been described as an overcrowded maze.

Architects Henri and Bruno Gaudin were given the job of its renovation. The building was gutted, but for the staircases and skylights were installed. After 3 years of work, at a cost of $50 million, the Musée Guimet re-opened in January, 2000, as a spectacular success. It is a beautiful example of the modern style of exhibition halls, natural light, spacious and airy. Though regionally organized, the rooms and the cultures represented seem to flow into one another. Emile Guimet would be pleased.

The Collections of the Guimet Museum

The Afghanistan-Pakistan Collection includes objects dating from the 1st century such as Gandhara art from the Great Kouchans dynasty of the 1st-3rd centuries. Stucco art of the Kidara Kushans and the hephtalites of the 4th and 5th centuries excavated from Hadda is also exhibited.

The Chinese Collection contains 20,000 objects covering 7,000 years of art, beginning with jades and ceramics from the Neolithic period, bronze works from the Shang and Zhou dynasties, Han and Tang tomb figures and paintings from the Tang and Qing dynasties.

The South East Asia Collection includes Emile Guimet's own collection, the Trocadéro Musée Indochine collection, Khmer art and Cambodian artifacts. The Khmer sculptures are recognized as being among the masterpieces of world sculpture. Rare Champa sculptures are also represented including a great Shiva of the 11th-12th centuries.

The Central Asia Collection represents the great Buddhist art centers which sprang up at caravan rest-stops along the Silk Road. 250 paintings are also part of this collection as well as documents and manuscripts.

The Korean Collection contains 1,000 works of art from all periods of Korean civilization, including Silla gold and silverware from 57 B.C.-668 A.D. and the Silla Crown, bronzes from the Koryo period and tomb sculptures from the Choson period.

The Indian Collection includes terracotta, stone, bronze and wood sculptures from 3000 B.C. to the 1800s-1900s A.D. Paintings from 15th-19th centuries are exhibited, as well as archaeological artifacts which indicate a connection to the Romans.

The Japanese Collection contains 11,000 works covering the time from 3000 B.C. to the Mejira era of 1868. Terracotta vases and figurines of the Jomon, Yayoi and Kofun cultures are exhibited. Particular attention is given to the iconic development of the 8th-15th centuries represented in sculpture and silk paintings. Also displayed are kakemono, makimonon and screen paintings from the 16th-19th centuries. Ceramics, Tea Ceremony stoneware and porcelain and ivories are also part of this impressive collection.

For another museum of Asian art in Paris, visit the Musée Cernuschi. 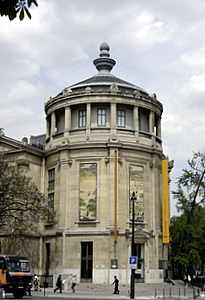 Admissions and Hours of the Guimet Museum

Admission prices for the permanent exhibition are:7.50 euros full fare; 5.50 euros for students under 26 years old.

Admission for the temporary exhibitions are: 6.50 euros full fare; 4.50 euros for students under 26 years old.

Admission prices for both permanent and temporary exhibitions are:8 euros full fare; 5.50 euros for students under 26 years old.

Admission is free for those under 18 and for EU citizens under 26 years old.

The museum is free to everybody on the first Sunday of the month.

An Asian restaurant is available and has the same hours as the museum. No admission fee is required for the restaurant.

A bookstore and gift shop is also available without admission fees and is open during museum hours.