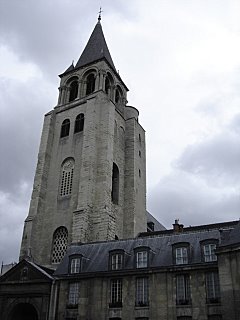 The Romanesque church of St Germain des Pres was the center of a monastery that covered much of the area. The Abbey also had legal jurisdiction over the village that grew up around it.

These days, the church is in the center of a very active area on the Left Bank of the Seine river. The square in front of the church has bistros and restaurants, shops and cafes all around it.

These nearby cafes were frequented by many artists and writers of the early to mid-20th century.

In the 6th century, the church of St Germain des Pres and the abbey was known as Saint Vincent and Sainte Croix.

The Merovingian King Childebert built the abbey of Saint Vincent as a shrine to house relics of the Saint and a jewel encrusted cross that was reported to have been made for King Solomon.

The Bishop of Paris, Germain, encouraged the King in building the larger church. Soon after Germain's death, he was canonized St. Germain of Auxerre.

The church was the burial place for the Merovingian kings until 639. After that, French Kings were buried at the basilica of St. Denis up until the French Revolution. 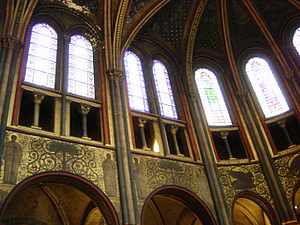 Two hundred years after Saint Germain's death the church was renamed in his honor, the church of St Germain des Pres.

Before the area was inhabited, the abbey stood in the middle of a great prairie, from which it took its name, "des Prés", literally Saint Germain of the Fields, or Meadows, to distinguish it from Saint Germain l'Auxerrois, also named in honor of the bishop of Auxerre.

When he established the monastery, Childebert gave to the abbots land in Issy and the area which is now Saint Andre des Arts.

These lands made the monastery a vast landholder on the Left Bank.

In 1255, the inhabitants of the village were considered as a body entirely distinct from Paris. They enjoyed special immunities and made their own laws.

In the 13th century, the village was inhabited by servants of the abbey, mostly farmers. The village was primarily a collection of barns and stables that surrounded the main monastery buildings.

During the war with England in 1368, the monastery was surrounded by a moat filled with water from the Seine.

After the 16th century, the area became fashionable where many aristocrats and wealthy business people had homes built.

The faubourg Saint Germain was absorbed into Paris during the reign Louis XIV.

Thanks to the last abbot of the monastery, the library, which had caught fire, was partly saved. The manuscripts were all preserved and in 1795 were brought to the Bibliotheque Nationale. The library contained nearly fifty thousand printed volumes and over seven thousand manuscripts.

During the Restoration, many monuments and other valuables were given back to the Church of St Germain des Pres. 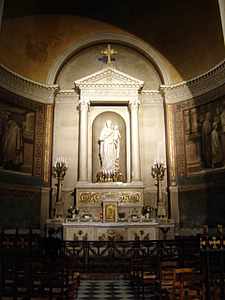 These included a Virgin in marble, called "Notre Dame la Blanche", a statue of Sainte-Marguerite by Jacques Bourlet (1705), and a figure of Saint Francois Xavier, by Coustou.

The mausoleum of Casimir, king of Poland, who became abbot of Saint Germain in 1669, was rebuilt in 1824, located in the left transept. The kneeling figure, offering his crown and scepter, is by Marsy, the relief underneath is by Jean Thibaut.

In the opposite transept is a similar tomb, reestablished at the same time, of Oliver and Louis de Castellan, killed in the service of the king in 1644 and 1669. The figures and medallions are by Girardon.

In two chapels opposite each other in the apse are the tombs of William and James Douglas, while the tomb of the Douglas family was in the chapel of Saint Christophe.

William Douglas, a prince of Scotland, died in 1611, in the service of Henri IV. James, his grandson, was killed in 1645, aged eighteen years, in a combat near Douai.

During the Revolution, the remains of Nicolas Boileau, Rene Descartes, Jean Mabillon and Bernard de Montfaucon were placed in the Musée des Petits Augustins, and later moved to the church of Saint Germain des Pres.

The Chapelle Sainte Genevieve has two 13th century glass windows. These represent Anne and Joachim, the Annunciation and the Marriage of the Virgin.

The wall panels throughout the nave and choir are work of Hippolyte Flandrin, from 1842-1849.

The panels depict: Christ's entrance into Jerusalem; four symbolic figures, Faith, Hope, Charity, and Patience; Saint Germain accompanied by Doctrovee, the first abbot of Saint Germain des Pres, receiving from Childebert and Ultrogothe the model of this basilica; Jesus carrying his cross to Calvary; Justice, Prudence, Temperance, and Force; and the consecration of the second church in 1163.

The decorations of the choir show the twelve apostles on a gold background. At the back, is the Lamb of God, holding the world and the standard of triumph, four symbols of the evangelists, the eagle, the angel, the lion, and the winged bull. The modern windows of the church were also made from designs by Flandrin.

The existing Church of St Germain des Pres is small fragment of the immense constructions that constituted the rich and powerful abbey.

There was a well behind the altar, near the tomb of the saint; its water was said to have miraculous curative properties.

The well has longed since been closed but because of the great number of miracles that happened there the church became a popular place of pilgrimage.

The main tower is believed to be from the first construction in the 7th century.

The main nave and transept of the church are from the 11th century.

Despite all the modifications during the centuries, the Church of St Germain des Pres still reflects the very primitive character of the early building.