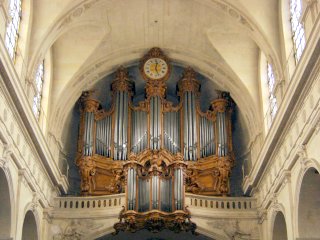 On the site of the present church of Saint Roch once stood the Chapel of Saint Suzanne. Consecrated in 1525, its name was changed to that of Saint Roch in 1580.

The Church was part of the royal parish of Saint Germain l'Auxerrois.

In 1630, Cardinal Richelieu began a vast restoration and rebuilding project. A new church was designed to replace the older chapel which by then had become too small for the needs of the surrounding community.

In 1633, Louis XIV set the first stone for what was to be the new Church of Saint Roch.

The architect for the church was Jacques Le Mercier, the same man who drew up the plans for the Chapel of the Sorbonne. 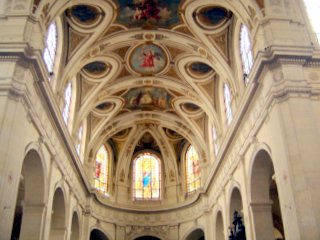 In 1660, because of financial problems, work on the church was suspended. In 1701, work was again underway and in 1719, through the generosity of and financing of John Law, the nave and vault of the church were completed.

It was consecrated in 1740 and then entrusted to some of the most noteworthy artists of the time to complete the interior.

Before the Revolution, the church had become one of the grandest churches in all of Paris.

It was closed in 1791 and pillaged in 1794. Under the Second Empire though, it was restored and today stands as a fine example of period architecture and a museum for some great works of art of the 17th and 18th centuries. 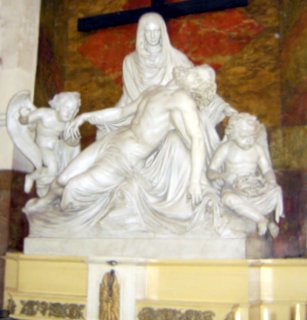 The Architecture of the Church of Saint Roch

It was closed in 1791 and pillaged in 1794. Under the Second Empire though, it was restored and today stands as a fine example of period architecture and a museum for some great works of art of the 17th and 18th centuries. 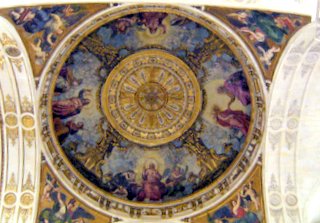 The main cupola was the design of Jean Baptiste Pierre and constructed in 1757.

The Chapel of the Virgin is the work of Jules Hardouin Mansart with the art decoration having been done by Etienne Maurice Falconnet. 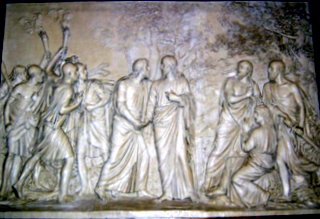 Though none of the original sculptures and statues remain, during its restoration the church inherited works that had belonged to many other area churches.

Today it houses a priceless collection of grand murals, sculpture and carvings from the 17th, 18th, and 19th centuries.

Among the most noteworthy are the great murals on the east and west walls of the nave.

"Le Miracle des Ardents", is by Gabriel Doyen and dates from 1767. It retells the story of a great plague that occurred in Paris during the reign of Louis VI, in 1129. As the story goes, the plague was alleviated through the intercession of Saint Geneviève, the patron saint of Paris. 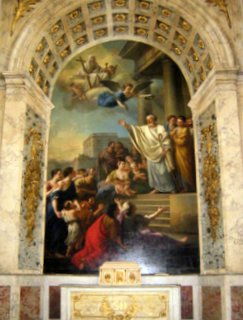 Across from that mural is a mural of Saint Denis, the first bishop of Paris, preaching to the Gauls. It was painted in 1767 by Joseph Marie Vien.stroch 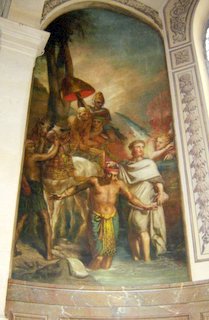 These are but two of the more than twenty works from the period in this church. Truly a fine museum in it's own right.

Return to Top of Church of Saint Roch Page